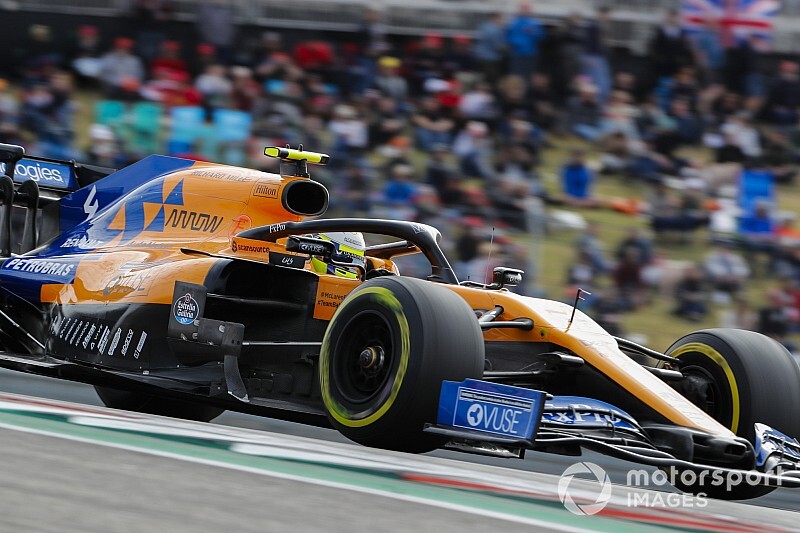 Lando Norris says McLaren’s superiority against its midfield Formula 1 rivals looks greater than it really is because qualifying has hidden some of its problems.

McLaren is on course for a comfortable fourth-place finish in the constructors’ championship and top-scored amongst the midfield teams at half of the races so far in 2019.

It has also had the fourth-fastest car with an average qualifying advantage over fifth-fastest Renault that, in percentage terms, covers the next four teams.

However, Norris believes that in qualifying McLaren “just about get away with how the car is performing”, describing the MCL34 as a car with a “fundamental” problem of being tricky to drive.

“The new tyres mask it a bit, and they just give us the things that we need on the qualifying lap,” he said. “So we were able to do better almost than what we know we will able to do during the race.”

He added: “We’re on edge in qualifying and the car can perform well but when we get to the race the car kind of shows its true potential and what it should be doing on those older tyres and the new tyres just mask it.”

McLaren produced its strongest qualifying performance of the season at the previous race in the United States, qualifying within 1% of the fastest time for the first time this year.

Renault’s Daniel Ricciardo qualified six tenths slower than the lead McLaren in the US but managed to finish sixth in the race, ahead of Norris.

Asked by Motorsport.com if it is closer between McLaren and its rivals than the season’s statistics make it look, Norris said: “Yeah, I would say so. We’re good in qualifying which is a good bonus for us, because it sets us up well for the race every time.

“I’m always in a good position, you can have clean air every now and then. We’re able to not show as easily our weaknesses, or it kind of hides because we have clean air and the others are stuck behind us.

“But then when it’s vice versa, then we struggle a lot more and we realise we’re not as quick as what they are when they’re following us kind of thing so.”

Norris believes that as well as McLaren’s “weaknesses” showing more in the race, the team has been hamstrung by operation problems – with pitstops one key area recently highlighted by team boss Andreas Seidl.

While he does not believe McLaren is “bad” at pitstops, Norris conceded it has had “more” and “bigger” problems than others.

“We started the season off fairly well actually but we haven’t been able to improve as much as some of the other teams,” he said. “So now we know we’re a bit lacking. And we’ve had some problems where it’s cost Carlos points, it cost me points.

“It’s not been terrible. It’s still been better than what it was last year, that’s for sure.”

Hamilton braced for next round of "stressful" F1 contract talks