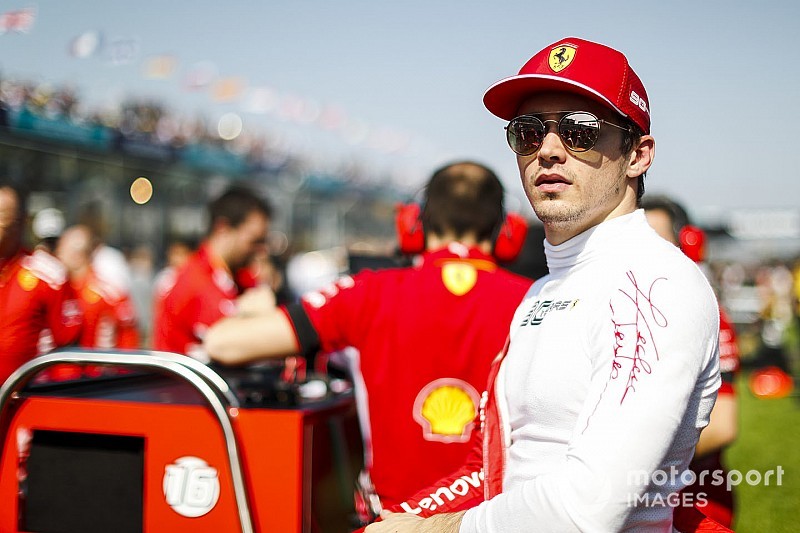 Charles Leclerc established a "good starting point" on his Ferrari Formula 1 debut and is already pushing its engineers "hard", according to his new team boss Mattia Binotto.

Leclerc was signed to replace Kimi Raikkonen at Ferrari after just one year in F1 with Sauber.

He finished fifth, just behind four-time world champion teammate Sebastian Vettel after being denied a chance to attack him late on, in his debut in last weekend's Australian Grand Prix.

"Not only as a driver, he's very helpful for the team. He [is] very involved trying to do his best, pushing the engineers hard to try to do [get] even them to improve themselves and to have a better car.

"If we judge his entire weekend it's a pretty strong one. His qualy wasn't perfect, he's aware of it, but I think he drove well also in Q1, Q2.

"Maybe not perfect in Q3, but generally speaking he had a good weekend. His second stint was also performing well.

"I'm happy with the way he's approaching the first race and it's a good starting point."

The dynamic between Leclerc and Vettel has been highlighted by many F1 figures as a key storyline in 2019.

Leclerc, on a better strategy than Vettel, would likely have been able to pass his new teammate for fourth and beaten him at the first attempt had Ferrari not chosen to adopt a zero-risk approach at the end of the grand prix.

Vettel reiterated his belief that Leclerc will "put a lot of pressure on me the whole season" when asked by Motorsport.com to consider Leclerc's debut and his own first start for Ferrari back in 2015.

"For Charles, obviously it's a dream coming true - similar to me, [but] obviously at a different point in his career," said Vettel.

"It's quite nice to be that young and join a big team like that.

"I think he's done really well from what I've seen so far, he will put a lot of pressure on me the whole season.

"I'm aware of that and I think it will be very close.

"He's very talented, I want to meet his parents and congratulate them because by the looks of it they brought up a nice boy, and a fast driver too.

"I'm sure we'll have tough and tight battles this year, but more than anything I hope we have a lot of fun together."