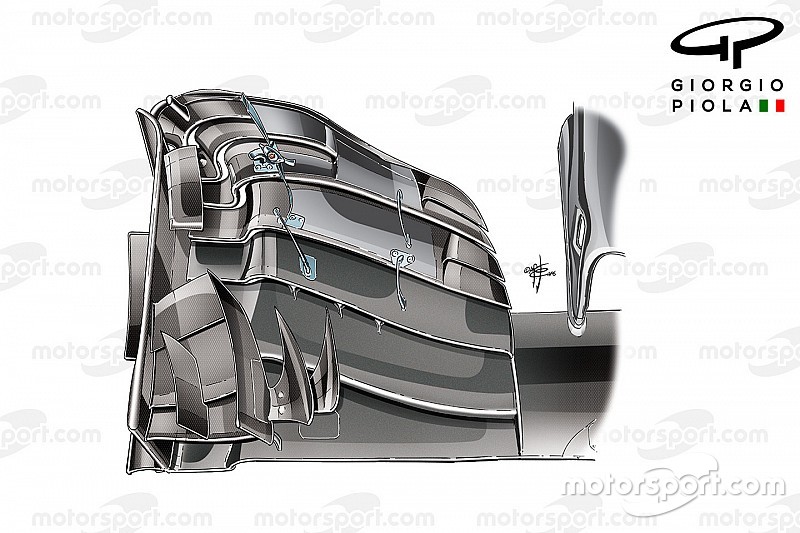 Fernando Alonso was once again the recipient of the new front wing specification, having been given the newer one last time out in Britain, too.

The top flap has been changed with the team reverting to a similar design to the one they used in Spain, where the flap is split into two sections at the inboard tip, much like the flap below. The configuration used in Spain featured a smaller split, whilst the tips were also shaped differently.

These changes will have a very different effect of the Y250 vortex that is shed from the juncture at the mainplane's flapped and neutral section below, which was also changed in the British GP update.

The new surface finishes used at Silverstone were also retained, making it difficult for debris to adhere to the surface, something that was visible when even rain drops failed to accrue on the surface during qualifying. 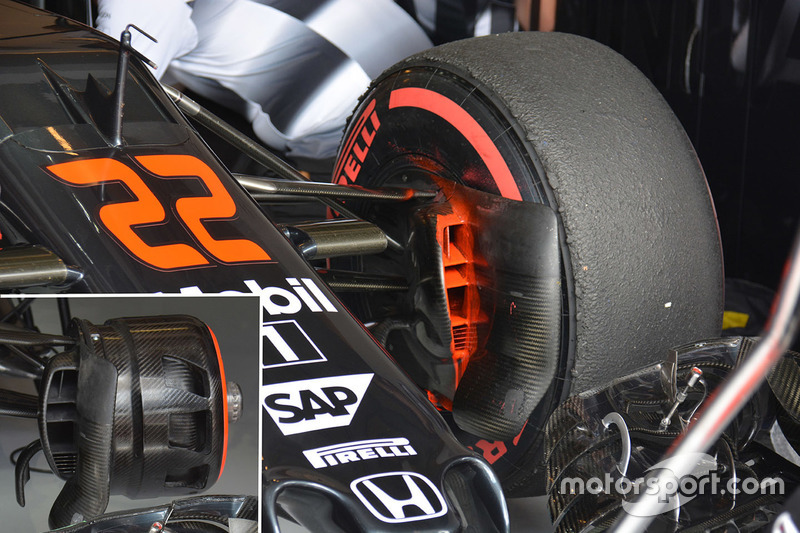 The front brake duct has been another area of the car that the engineers have focused on this season, having switched back to a more conventional vertical fin and outboard inlet.

In Hungary, the team revised this inlet, as pictured above with flo-viz painted onto the duct to assess its impact and make sure air is being passed correctly to the various channels.

The inlet supplies a fresh current of cool air to calipers, brake discs and even the hollow axle, which is then blown out the centre of the wheel to improve aero.

You'll note from the previous specification (inset) that the inlet was much more bulky beforehand and so the team is clearly looking at reducing the aerodynamic impact of the inlet, while maintaining brake efficiency. 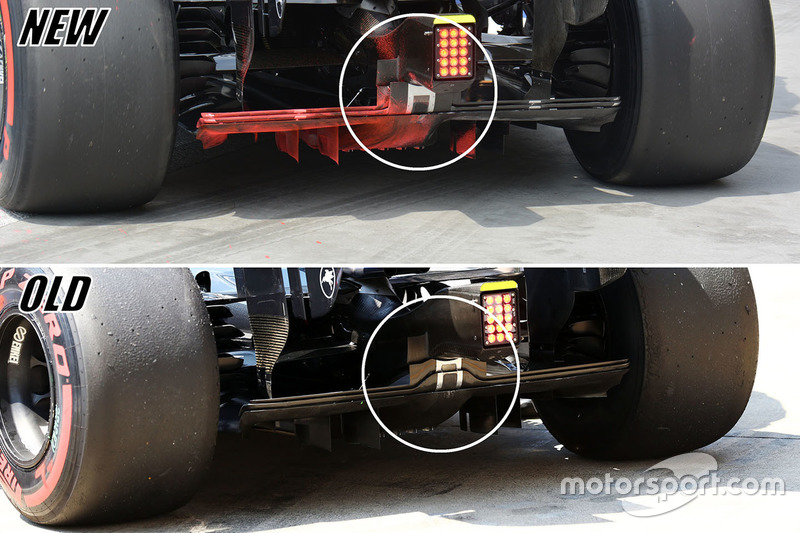 The team has also revised the winglet that sits between the diffuser and crash structure for Hungary, with both drivers using the new specification.

This 200mm winglet may seem insignificant, but it sits in a position that can have an impact on the aerodynamic structures both above and below, which is critical when we consider that the teams want the rear wing and diffuser to interact with one another.

The new set-up sees the lowest element, which is connected to the lower of the two gurney tabs, increased in height to meet the underside of the crash structure - but doesn't span the total 200mm width that is permissible.

Meanwhile, the secondary flap's shape is also revised to accommodate the change and have an effect on the airflow, while the upper winglets are almost the same.

Toro Rosso has done an exceptional job with the STR11 considering how late into its design phase that the power unit supply deal was done with Ferrari.

It has led to some compromises though, and the size of the sidepod inlets is but one issue, with the 2015 power unit it's running a little less thermally efficient than it had planned. 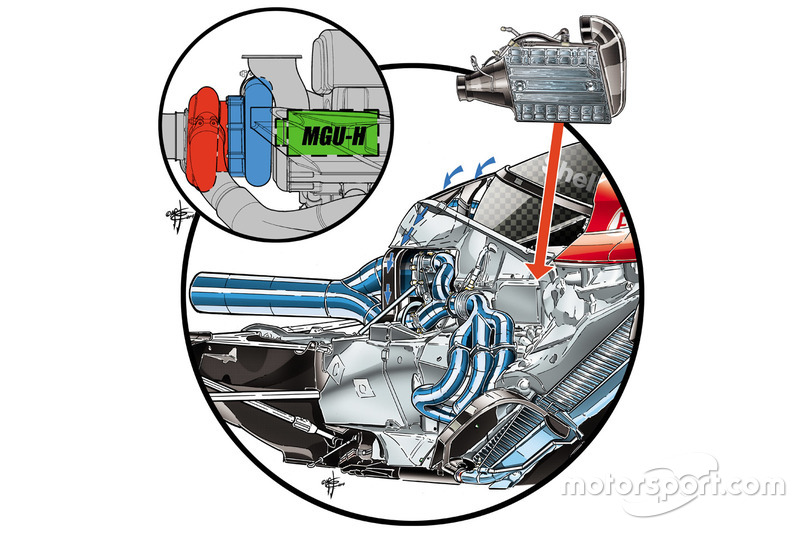 In order to make up for this, we've seen the team make numerous cooling alterations throughout the campaign so far, notably running an asymmetric rear cooling outlet to reject heat differently for each sidepod, with radiators mounted in either sidepod rather than the intercooler in one and radiator in the other as it was planned with the Renault power unit.

This is because the 2015 Ferrari power unit utilises a liquid-air chargecooler between the engine's vee to take care of boost temperatures. 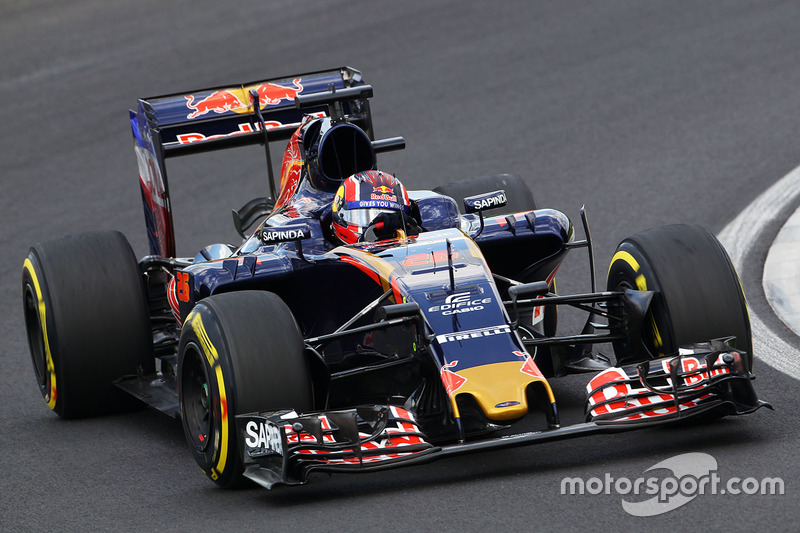 In Hungary, the team adopted a new engine cover, first tested at the post-British GP test, which featured inlets either side of the main airbox.

These inlets have been tasked with providing cool air to one of the ERS coolers at the rear of the engine, a task ordinarily undertaken by the main airbox, which is now free to complete other cooling tasks. 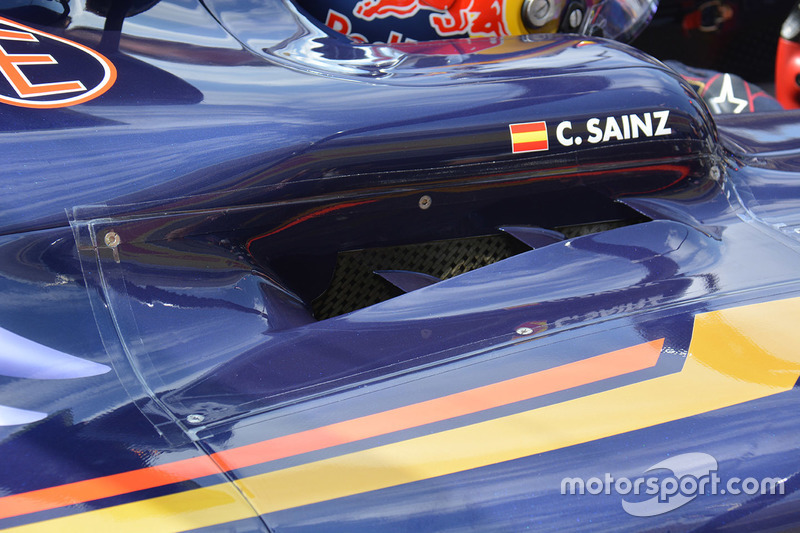 Alongside the cockpit, the team also used some significantly-sized louvre panels to disperse heat rejected by the ancillaries inside the sidepod.

You'll note how they're raised at the front and then taper rearward to shape and improve the way in which the air is rejected, not only improving the internal aerodynamic flow but also how air moves across the surface of the sidepods, too. 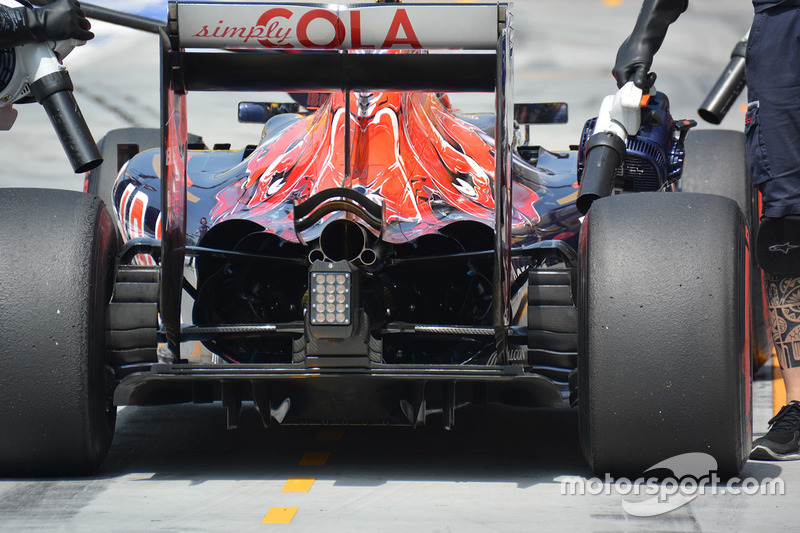 At the rear of the car, in place of the asymmetric cooling outlet we've become accustomed to was perhaps the largest outlet we've seen a team use in some time.

Although it can be argued this may be detrimental to aerodynamic performance, heatsoak can be even more damaging to a cars power unit when stuck in traffic. 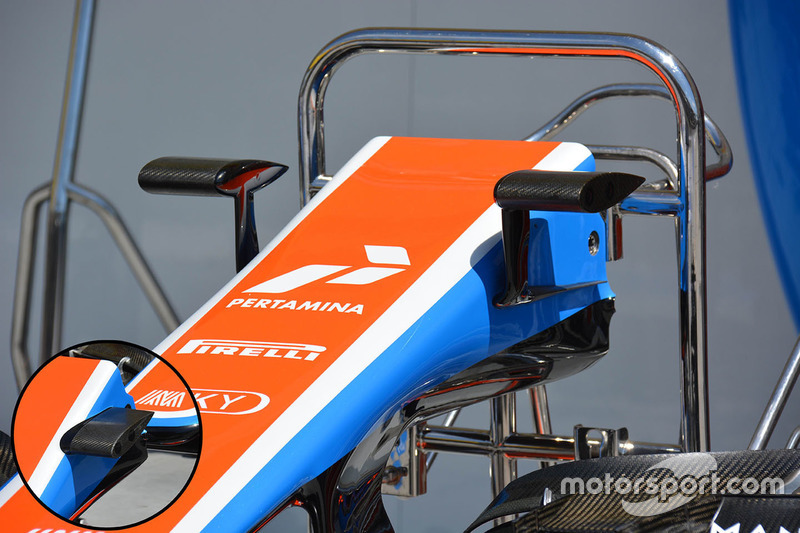 Manor continues to make minute detail changes to improve the MRT05 in the hope that the points gained earlier in the season by Pascal Wehrlein will be enough to see the minnows stay ahead of Sauber in the championship standings.

In Hungary, the team arrived with a new pair of mounts for the camera housings, which are affixed to the nosecone. Following on from a design inspired by Mercedes, Ferrari, Red Bull and Toro Rosso, these stalks move the camera housings up higher than is intended by the regulations.

Whilst the housings are supposed to be aero-neutral, they have long been used by the teams to garner an advantage with the placement.

This current trend moves them into a position that sees them interact with the suspension downstream in a different way, improving how they, in turn, condition airflow seen by the sidepods.

You'll also note that the bottom of the mount is shaped in a particular way too, more so than any of the other teams with such designs. It should act like a canard and shed an airflow structure that will improve things downstream too.

Renault might have admitted its development focus is now fully on its 2017 car, but we can still expect a few bits from time-to-time as the French manufacturer will undoubtedly have left a very small team on this year's car and will bring things that are already in the design run, a cycle that lasts several months.

Work carried out over the last few GPs and at the post-British GP test has been invaluable in the team understanding how to get the best from a chassis that is clearly compromised by both the budget it was designed with last season and the fact it was initially intended to house the Mercedes power unit.

In any case, progress in Hungary stood out in a tough season for the French manufacturer, which is most likely down to the investigation into a suspension upgrade that was cast aside a few races ago.

Meanwhile, it seems to have a much clearer idea of where they were going wrong with the tyres and setting the car up around them, having done numerous aggressive tests to prove its theories. 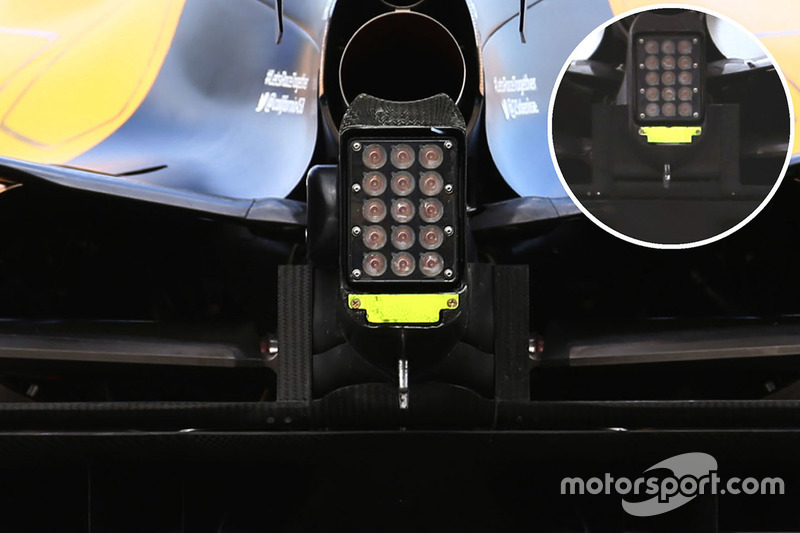 It might seem like an inconsequential change but the team also changed the winglet that sits between the diffuser and crash structure in Hungary, too.

The previous winglet was perhaps one of the least inspirational on the grid, with just a solo slot placed at the gurney level, while the new winglet features a revised slot in that position and several more above it.

This will have an impact on the central portion of the diffuser, which in turn will improve the connection to the exhaust plume and rear wing above it, as the airflow structures mesh.

The team also used a monkey seat in Hungary to help improve this interaction and provide the drivers with the balance they desire to push the car with more confidence.