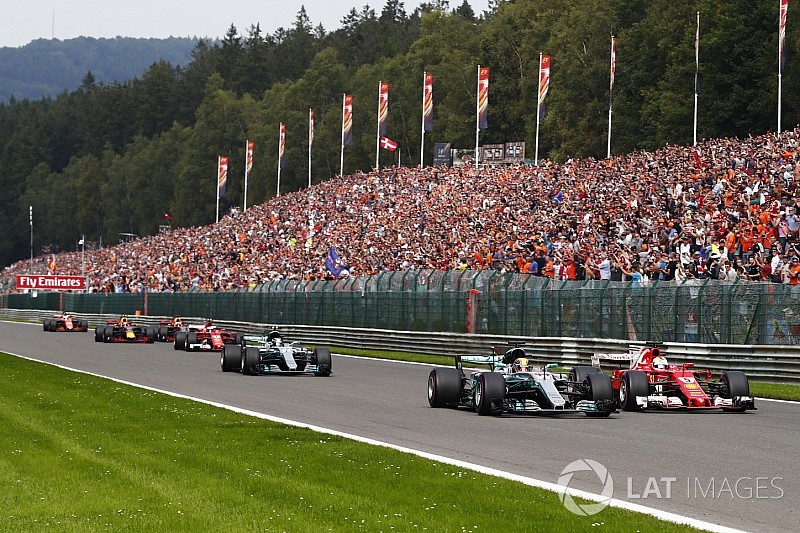 Lewis Hamilton says selecting the wrong power mode actually helped him stay ahead of Sebastian Vettel in the restart in the Belgian GP, because it allowed the German to get closer than he had expected to be.

Hamilton explained that losing speed by being in the wrong mode meant that Vettel was right with him at the La Source hairpin, and the Ferrari driver was thus not able to get a good run on him down the hill.

Vettel's failure to pass Hamilton immediately after the restart was crucial to the outcome of the race, as it was his best chance to deprive the Mercedes driver of the lead, especially as he had the advantage of ultrasoft tyres against Hamilton's softs.

"Initially I got a very good start when we were on the back straight, I got a real good pull away," said Hamilton.

"I was able to catch him out, as I did in Baku on the three or four starts with the safety car. I broke away, but didn't have the right power mode.

"I pulled away initially, and then he started catching me up, so he went into the last corner.

"Initially it felt like that's a mistake, but in actual fact it was actually a really good thing, because if I came out of the last corner with that gap, he would have had the momentum, being three or four car lengths behind, to really propel and really get a good tow, and come and slip past me.

"It worked out perfectly."

"I was at 90 percent throttle"

In addition Lewis opted not to use full throttle in an attempt to keep Vettel stuck behind his rear wing.

He was also convinced that Vettel would not try to pass too early on the straight, because he would fear being re-passed before the end of it.

"We got into Turn 1, I had very cold tyres, so I had a small lock-up. He was on the gas before me, I could hear him, and then as we were going down that straight I didn't keep it full lit the whole way, I was at 90 percent throttle, just to keep him as close as possible.

"I knew he wasn't going to come by, because he knows I would overtake him then at the top part with the tow.

"As we were going up Eau Rouge, that's where I really gave it maximum power. We got to the top and he had no space to really propel himself, so he just pulled out alongside. It was a cool battle, but it was really great to go into Turn 5 having done just enough to stay ahead. I was really happy with that."

Hamilton said he had to work hard to stay in front.

"After that it was like nine or 10 laps or whatever it was of qualifying, heavy, fast laps, to try and continue with that gap.

"He was very quick, he had the better tyre, so I had to pull out some really good laps in order to stay ahead of him, because he was very, very quick in that second phase."