Mercedes "made it hard for ourselves" in US GP - Hamilton

Mercedes Formula 1 driver Lewis Hamilton admits he and the team “made it hard for ourselves” in committing to an inferior United States Grand Prix strategy compared to his nearest rivals.

Hamilton started the Austin race on pole with the chance of clinching the 2018 drivers' title early, but lost out to Kimi Raikkonen at the start – and also dropped behind Max Verstappen, who like Raikkonen made a single stop to Hamilton's two.

The championship leader caught the pair at the end of the race on fresher tyres, but could not make any further progress as Verstappen held his ground.

Hamilton admitted after the race that his initial pitstop on lap 11 came as “a little bit of a surprise” as Mercedes tried to take advantage of a virtual safety car period.

“Once we've done the stop on 11, I knew I would be doing a two-stop,” Hamilton said.

"It just made it so hard for ourselves - we came out, I had to catch Kimi, caught him and tyres were dead, and then he did his stop and was catching me with fresh tyres, and then I came out after the last stop and had the 12 seconds to catch up.

“It just made it so hard for us to even compete today.”

Hamilton said he wasn't “quite sure of all the reasoning” for the call, but reckoned the choice of the starting tyre was a major factor in the defeat.

The Briton had started on supersofts to Raikkonen's ultrasofts, and felt this allowed the Finn to get ahead and control the race.

“I think it already started from Q2, that tyre was the wrong tyre to start on.

“We already knew there was a big difference in start performance on these different tyres, yet we fell for something that we already knew was potentially not the way forward.

“And obviously I lost position to him [Raikkonen], and then wasn't able to keep up because he had clean air and a better tyre.

“It was definitely a lesson learned, I think, for us. Performance-wise wasn't our greatest weekend - but we've had some incredible weekends this year.

“And still to get a third, I'm still grateful for that - but naturally, starting first and finishing third is never a good thing.”

Asked by Motorsport.com whether he was surprised not to have wrapped up the title after Vettel's mishap, Hamilton said: “Not surprised, I finished third. I had to win the race today.

“Not really sure what happened in the race behind, but obviously he did a good job to come back.

“But as a team we clearly struggled - you could see Valtteri struggled to keep Seb behind even when Seb must've been quite far behind [after spinning].

“Performance-wise we were definitely off this weekend.” 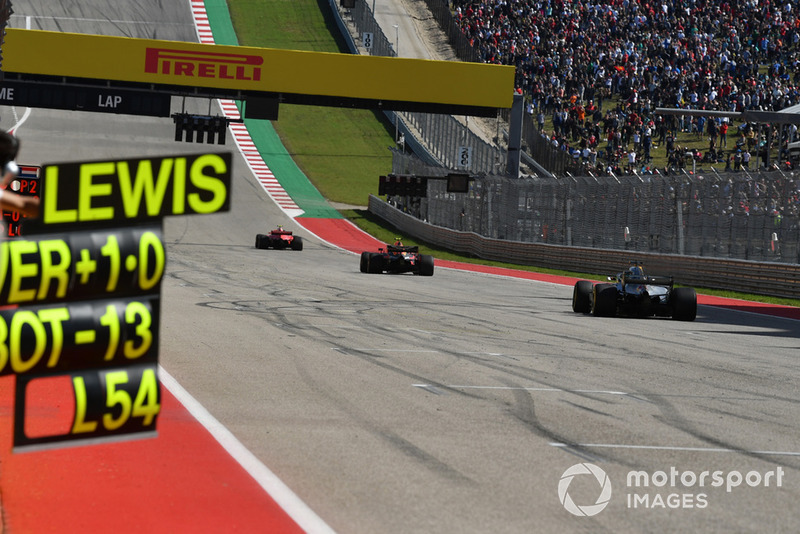