Formula 1 champion Lewis Hamilton says allowing drivers to use DRS through Turn 1 at Silverstone is a “pointless exercise” and creates “an unnecessary kind of danger”.

F1 has added an extra DRS zone to several circuits' layouts in order to boost overtaking, with the British Grand Prix venue Silvertstone's new third zone running through the start-finish straight and the subsequent two high-speed corners, Abbey and Farm.

Many of F1's cars do not have enough downforce to remain stable with DRS open through T1, and drivers thus need to deactivate it manually – something that Haas driver Romain Grosjean did too late in FP1, which resulted in a crash.

Asked whether keeping track of DRS through Turn 1 was tricky, Hamilton said: “It's not tricky, no. It's kind of a pointless exercise, and kind of just dangerous.

“We used to have DRS everywhere [in practice and qualifying] and we had to engage [it] and take off, and they stopped us from doing that because people were spinning off.”

Hamilton said that he anticipated there would be an accident with the new DRS zone – and that he told Mercedes team manager Ron Meadows to raise the issue with Formula 1 race director Charlie Whiting.

“I remember yesterday, when we did the brief, I was like, 'Ron, you should tell Charlie, someone's going to crash'. Because the speeds we go into Turn 1 are insane.

“And what happened today? I was like, 'told you'.

“It's just kind of not necessary really to have it through there. I mean, we're all managing, but if someone sticks [with DRS at T1] in qualifying, they're going to crash - so that's kind of why it's an unnecessary kind of danger.”

While he discussed the matter with TV crews, it is understood Hamilton did not raise the issue in Friday’s drivers’ briefing. 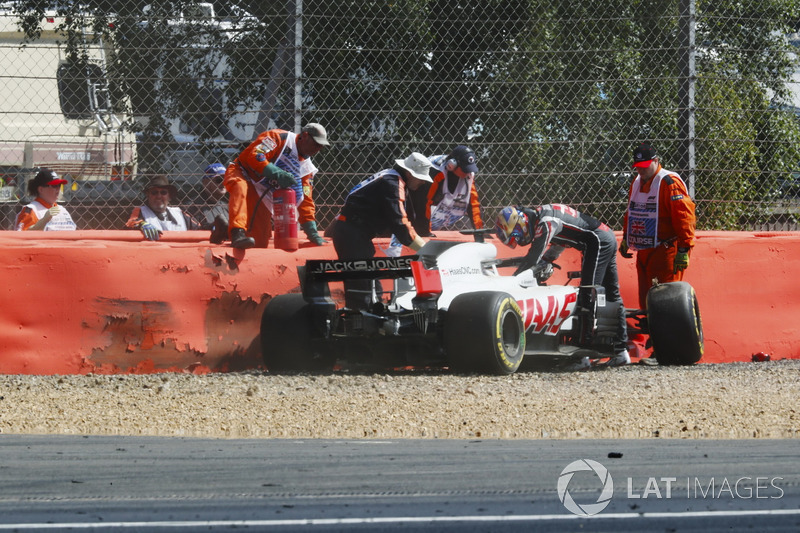 Queried of about the benefits of keeping DRS open through Turn 1, Sauber's Marcus Ericsson estimated the laptime gain to be around a “tenth”, while Toro Rosso's Brendon Hartley reckoned it was negligible.

“So I don’t believe there’s a lot of lap time in having it open through Turn 1 especially as you may be compromised through Turns 3 and 4.

“Especially following someone, you’re not going to be able to leave it open.”

Fellow Toro Rosso driver Pierre Gasly admitted that, much like Grosjean's Haas teammate Kevin Magnussen, he also nearly copied his compatriot in going off at Turn 1.

“I tried [keeping DRS open through T1], I almost ended up like Romain, so tried it [only] once,” Gasly said.

“Quali will be low fuel so probably going to try it again tomorrow, but today I tried and it wasn’t possible.”