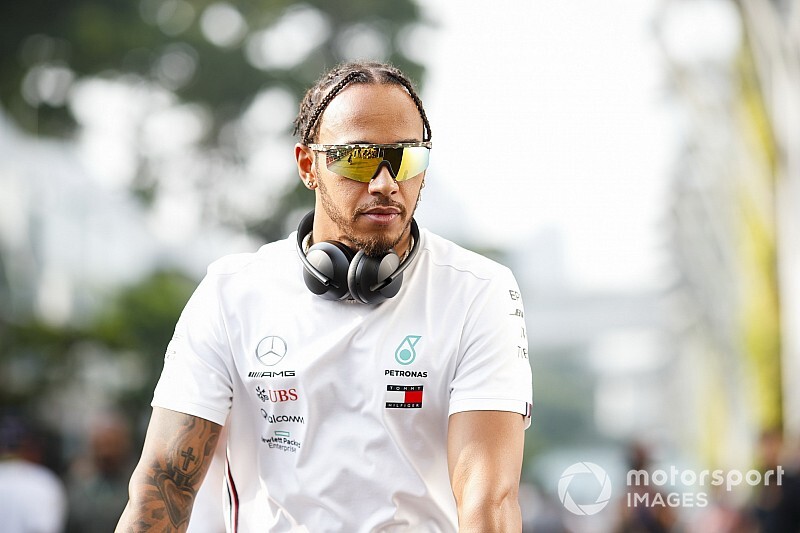 Lewis Hamilton is concerned that Formula 1's exploration of experiments like reverse-grid races is "an excuse for not doing a good enough job" with the incoming 2021 rules.

F1's rulemakers are considering trialling a Saturday qualifying race at a handful of grands prix next season, where the grid would be set in reverse championship order and the finishing order determines how the cars line up for the grand prix itself.

This has led to criticism from some drivers, although it is unclear if their opposition is to the specific idea F1 is pursuing or the general concept of reversing grids.

Hamilton was a vocal critic of F1's 2021 rules process earlier this year, before drivers were invited to take part in meetings over the new regulations to try to inform some of the decisions.

However, the five-time world champion said ahead of the Russian Grand Prix: "It was a concern back and it's still the same concern.

"The fact they are trying to reverse grids and all that seems to me like an excuse for not doing a good enough job in the decision process.

"Why are they making the cars heavier? There's no reason, it's not safer, it's not better for racing.

"My points are still the same. I'm still concerned. And I don't think that's going to change from what I've witnessed in the meeting."

Hamilton and his fellow grand prix drivers have formed a united front over what they want from the championship in the future.

This has involved representatives from the Grand Prix Drivers' Association, which has 100% membership across the current grid, attending the latest meetings over the new rules.

However, Hamilton does not believe that has been very effective.

Part of F1's changes for 2021 involve intensive research and development into trying to make it easier for cars to follow, to improve the racing.

When asked by Motorsport.com if it made sense to him that F1 was considering changes like reversed grids next year to liven up the races, if they are confident the bigger changes in 2021 will be effective, Hamilton said: "The changes they've made in previous years have not been particularly effective, so they are probably not confident with any decision-making process!

"I don't know. It's not an easy job. There's a lot of people involved in the decision-making process.

"Us drivers are trying to have more of an impact and more of a role in helping them make a better decision but it doesn't seem to have made much difference."

The next generation of F1 car is likely to increase further from the current 743kg weight limit because of standard parts and 18-inch wheels.

Hamilton said he would try to "remain hopeful" that the decisions will be good for 2021 but regarding the increased weight of the car he admitted: "I don't see the point of it.

"And we're going slower as well. Why does F1 want to go slower? We're supposed to be moving forward with technology and innovating, we should be faster.

"We're going to worse tyres, heavier cars, more sluggish…but when you speak to these guys they just don't understand.

"Pretty much all of them haven't raced before or been in a Formula 1 car. But that's how it's [always] been."