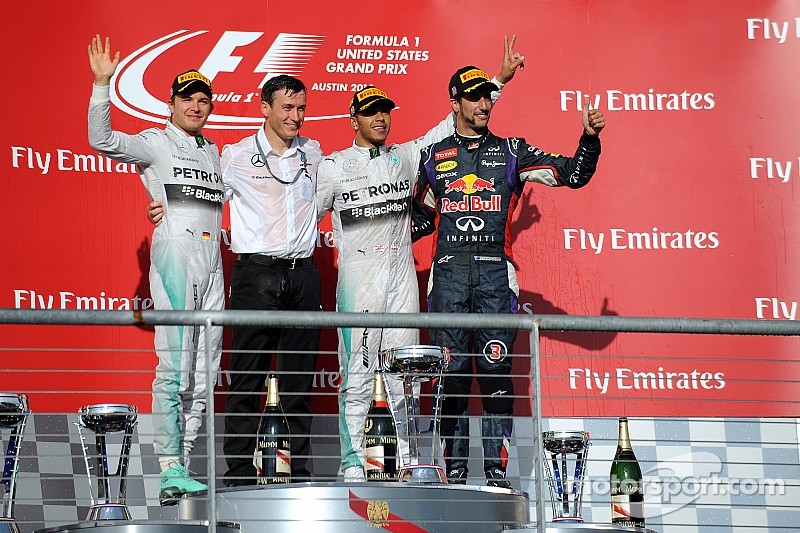 Mercedes’ driver, Lewis Hamilton may have missed out on securing pole position in qualifying yesterday, but the Englishman maintained his good track record on race day when it mattered most. The 2008 World Champion had the upper hand today as he took the chequered flag and became the winner of the FIA Formula One 2014 United States Grand Prix.

Hamilton has extended his lead in the battle for the Drivers’ title by 24 points with today’s race victory. The win is the 32nd of his career, making him the most successful British F1 driver in history.

Hamilton’s team mate and today’s pole sitter, Nico Rosberg had to settle for second place as the action on the track came to a close. The German driver crossed the finish line behind Hamilton and he also remains in second place at present in the battle for the Drivers’ Championship.

Red Bull’s Daniel Ricciardo ended the race in third place to complete the top three on the podium.

Williams’ driver, Felipe Massa finished the race where he began in his qualifying spot of fourth place. The Brazilian driver missed out on a podium place to Ricciardo, but he pipped his team mate in any case. Valtteri Bottas completed the race just behind his team mate, Massa to secure a fifth place finish for himself.

Alonso's fight to the front

Ferrari’s Fernando Alonso seemed to be in the limelight during the race.  The Spaniard had competitive scraps for position with several drivers in the field which included McLaren’s Jenson Button.  Alonso made his way through the field during the race and he ended the proceedings in sixth place.  Unlike Alonso, Button did not manage to maintain a point scoring position at the end of the race and he was accompanied by Alonso’s team mate, Kimi Raikkonen beyond the top 10.

Ricciardo’s team mate, Sebastian Vettel trailed him by a few places in the final race classification list. Vettel finished the race just behind Alonso to claim seventh place for himself.

Button’s team mate, Kevin Magnussen picked up some Championship points for himself in eighth place. The Danish driver caught the attention of the stewards on lap 16 and was under investigation with Sauber’s Esteban Gutierrez for the purpose of an unsafe release in the pits. It was reported on lap 21 that no further action would be taken with the pair.

Gutierrez had already been under fire by the stewards on lap eight for the purpose of speeding during the safety car period that took place. The Mexican driver was issued with a five second stop and go penalty on lap 11.

Lotus Renault’s Pastor Maldonado and Toro Rosso’s Jean-Eric Vergne were also issued with a penalty of the same kind as they found themselves under investigation together with Gutierrez.

Button was the fourth driver who caught the attention of the stewards for the same reason, but it was reported on lap 11 that no further action would be taken with him.

Vergne followed behind Magnussen to secure a ninth place finish for himself. The Frenchman was under investigation for a second time in the race on lap 53.  Vergne caught the attention of the stewards again along with Maldonado’s team mate, Romain Grosjean for the purpose of forcing another driver off the track. It was reported that the stewards would look into the incident after the race.

Maldonado in the points

He was penalized, dropping him to tenth and moving Maldonado up to ninth.

The Venezuelan driver’s race result also means that he has secured his first points of the season in the Drivers’ Championship. Maldonado was issued with the penalty for speeding in the pit lane around lap 39 of the race, but recovered for his best result of the season.

Before the race had barely begun, two of the drivers in the field bowed out of the action early.  Gutierrez’s team mate, Adrian Sutil and Force India’s Sergio Perez had contact, which led to the appearance of the safety car on the track on lap two.  It was announced that the stewards would investigate the incident after the race and for the purpose of causing a collision. The safety car remained on the track until lap four, to allow the marshals to clear both cars and debris from the circuit.

Perez’s team mate, Nico Hulkenberg became the third and final retirement of the race on lap 18.  The German driver suddenly came to a standstill at the side of the track. It was later confirmed that he retired from the action as a result of engine failure on his car.

Following the conclusion of the action at the spectacle of the Circuit of the Americas, Hamilton remains in control at the top of the Drivers’ Standings to his team mate, Rosberg who trails him in second place at present. Hamilton achieved his fifth consecutive race victory today, but time will tell when the last two races of the season take place if Rosberg can break the current cycle.

The drivers and teams now have just one week until the penultimate race weekend of the season takes place in the form of the Brazilian Grand Prix. The action on the track may be continuing for the majority of the field and especially for Hamilton and Rosberg as they battle for the Drivers’ title, but the absence of Marussia and Caterham was evident as the race unfolded today. It remains to be seen whether either of the two teams in question will have resolved their financial issues in order to participate in Sao Paulo next week.

A disappointing afternoon for Sahara Force India in Texas