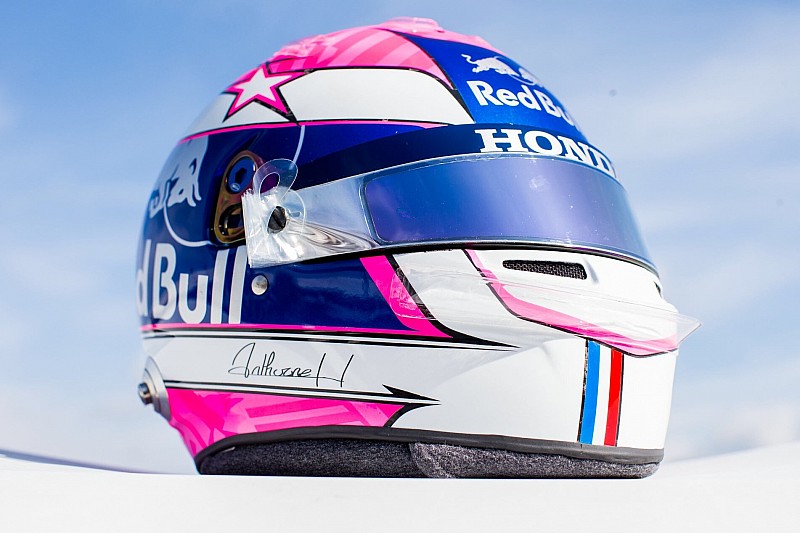 Gasly started his karting career alongside Hubert, who lost his life in a Formula 2 crash at Spa last Saturday.

The two were friends of 14 years and were schooled together and lived together during that time.

Gasly had carried a “RIP Tonio” sticker above his visor and "Racing for Anthoine" on the chin of his helmet in the Belgian Grand Prix.

His helmet designer Adrien Paviot was then commissioned with the tribute at the start of this week, with the turnaround finished in time for it to be shipped to Monza for Saturday.

Hubert’s helmet colours changed with his move to Formula 2 as a fully-fledged Renault F1 junior, with the prominent orange parts turning to pink to match his Arden team’s striking pink livery.

Gasly has incorporated the pink colouring and several of Hubert’s crash helmet features into his new design.

A white star appears on each side of the helmet, as with Hubert’s traditional design, plus the French tricolor under the chin.

Hubert’s name is stylised on the side of Gasly’s new helmet, as it was on his own design, while Hubert’s initials and a “Forever with us Tonio” message is present on the back.

Earlier in the week, Gasly shared several photos of the two and a heartfelt message In a pair of emotional posts on social media.

“14 years of friendship, started racing together, then became friends, roommates and classmates.

“You were such a humble guy, bloody fast and a hard worker, it was great to grow up together.

“I’m lucky and grateful for all the times and moments we shared during all these years.

“It’s just so hard to believe what happened. We will all try to make you proud from up there.

“I’ll keep chasing the dreams we both had since very little. I will miss you a lot my friend.”

Gasly’s regular crash helmet had already been customised to feature a tribute to another fellow Frenchman, the late Jules Bianchi.

It had a small “JB17” in the middle of French-flag design on the crown of the helmet.