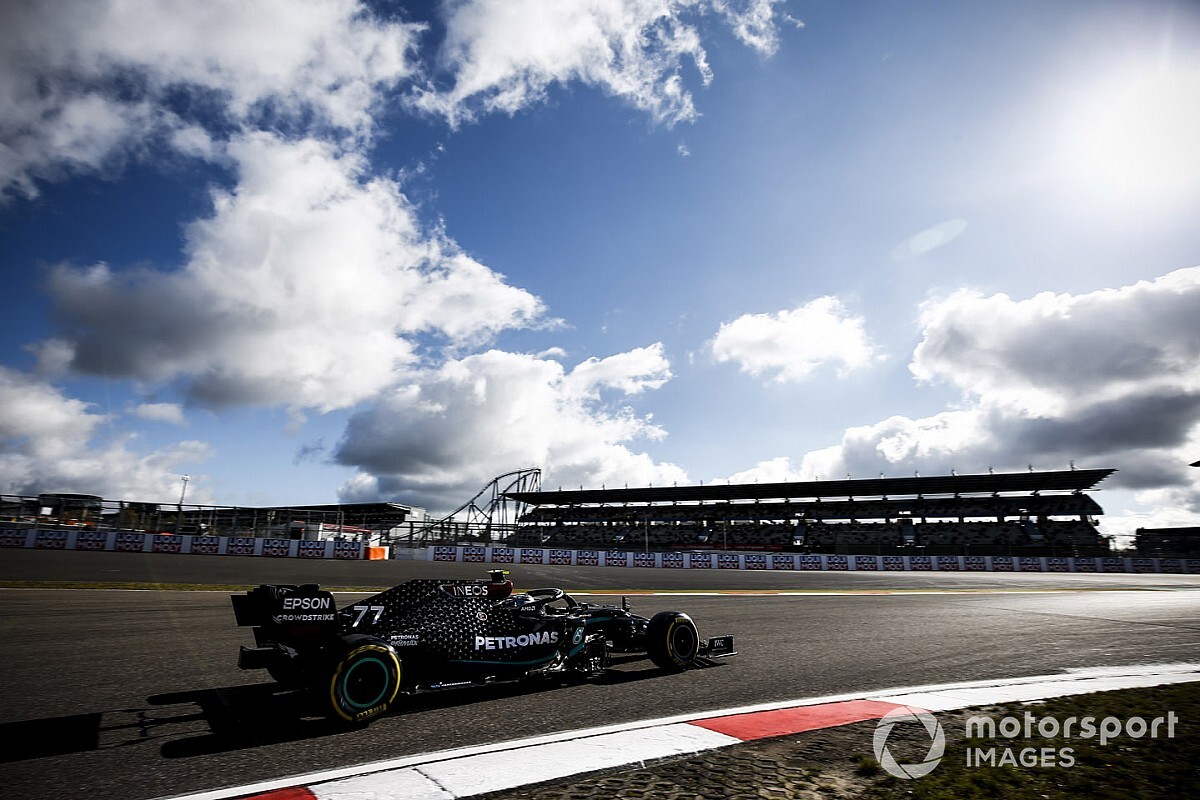 Valtteri Bottas set the pace for Mercedes as Formula 1 drivers finally got on-track at the Nurburgring in practice for the Eifel Grand Prix on Saturday morning.

After rain and fog prevented any running from taking place on Friday at the Nurburgring, teams were left to condense all of their programmes into the final one-hour practice session ahead of qualifying.

The FIA had altered its protocols to ensure the sessions could go ahead even in a repeat of Friday’s weather conditions, only for bright sunshine to greet the drivers ahead of Saturday's running.

A busy session followed that saw teams spend very little time in the garage, with the initial pace being set by the Red Bull duo of Max Verstappen and Alexander Albon on the medium-compound tyre.

Verstappen was able to retain his advantage at the head of the timesheets after the initial round of soft-tyre runs, only for Mercedes’ Bottas to improve with his second effect, moving one-tenth of a second clear of the field.

A final set of qualifying simulation runs saw Bottas improve his lap time by seven-tenths of a second, setting the benchmark for Verstappen and Mercedes teammate Lewis Hamilton to try and match.

But both Verstappen and Hamilton were forced to back off at the final corner on their first qualifying simulations after a spin for Williams’ Nicholas Latifi brought out yellow flags.

Hamilton managed to get in a second qualifying simulation on the softs that lifted him up to second, but was one-tenth shy of Bottas’ time of 1m26.225s.

A late surge saw Ferrari’s Charles Leclerc end the session third-fastest, having requested some changes be made to his car prior to his final runs. He ended the session within half a second of Bottas’ time.

Verstappen wound up fourth overall for Red Bull, reporting a lack of front grip throughout FP3, but finished ahead of Sebastian Vettel in the second Ferrari, who recovered from an early spin to take fifth overall.

Lando Norris finished the session sixth for McLaren ahead of Sergio Perez, who was the sole Racing Point driver taking part in FP3 after teammate Lance Stroll was forced out through illness.

Racing Point reported that Stroll was “not feeling 100%” and would sit out final practice.

A final decision on his participation in qualifying is set to be made after the session, with Nico Hulkenberg on standby for the team should Stroll be unfit for the rest of the weekend.

Daniel Ricciardo took eighth for Renault ahead of Albon, while Pierre Gasly rounded out the top 10 for AlphaTauri.

Haas pair Romain Grosjean and Kevin Magnussen wound up 15th and 16th respectively. Grosjean took a moment during the session to tell his engineer that it was a “beautiful track”, returning to the site of his 2013 podium for Lotus.

George Russell ended final practice 17th for Williams despite a spin at the chicane that left him sliding across the grass, albeit falling short of the wall and thus avoiding damage. Antonio Giovinazzi followed in 18th ahead of Latifi, who was the last driver to set a time in P19.