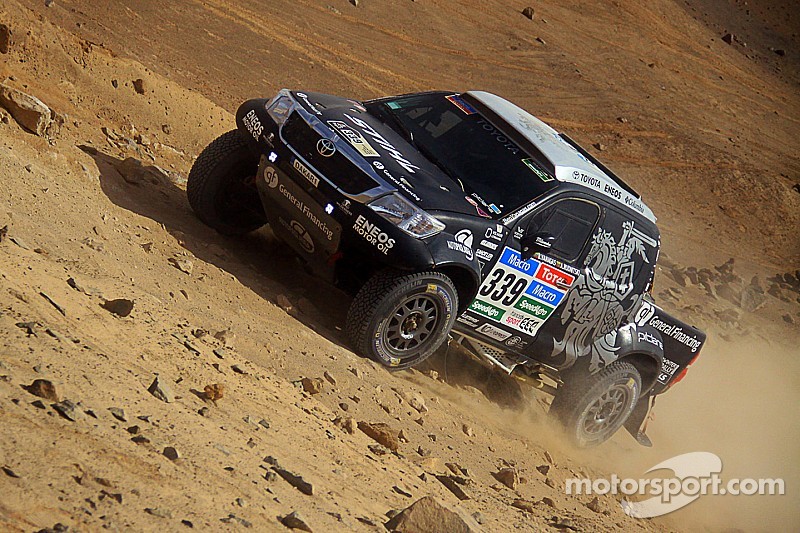 We continue with Robb into another stage of Dakar.

Another night in the hotel, a view of the ocean from the bed, looking at Carolina’s birthday photos on Facebook and three cups of coffee… the re-set button has been pressed. Although perhaps there’s a little lingering guilt that Benediktas Vanagas and co-driver Andrei Rudneitski are hard at work high up on a salt flat in Bolivia.

Last night I watched a video of Yazeed Al-Rajhi’s feet. Writing it like that sounds a little perverse but years ago I used to watch an Audo Sport promo video of Walter Rohrl on the San Remo rally dancing on the pedals. Al-Rajhi reminded me of that. Speeding across the desert is no cruise, it is constant violent stabs of the gas with the right foot and brakes with the left and for two days the drivers are doing it at an altitude of 3800m. Incredible.

That famous 1km high dune is right outside the campsite and we were expecting the cars to come in a couple of hours, but there, hurtling down the drop like a little avalanche of Russian steel was a Kamaz. One of the most impressive Dakar sights I’ve seen yet. The No 500 of Karginov was first back, with a twisted bumper. And if a Kamaz is bent you know it hit something so hard it would have destroyed a car. The Russian team only hold the top 3 positions but Sotkinov is only less than 15 minutes behind 4th place Ales Loprais so they still have a hope of total and utter domination.

I went up the dune, to by the jump and made friends with a friendly family with a nice gazebo to sit under and sat to watch the mid-field trucks coming down as my mad Lithuanian friend Gedmus hiked all the way to the top. A giant diesel engine topping out doesn’t sound so good though, like some large, machined pieces of metal are about to become shrapnel.

First car tearing over the crest and then dropping down like a V8 powered stone was Saudi rookie Yazeed Al-Rajhi, just over a minute ahead of Orlando Terranova. I spoke to team manager Glyn Hall about what he thinks of his performance. “He’s really doing the business but also very importantly he is listening to his co-driver and others in the team about getting experience of the event before going flat out. Well, he’s experienced now, so today he chose to go flat out!” Today was the first stage win by a non-MINI driver.

Not so happy was the rather deflated looking Giles de Villiers sitting, resting his arm on his table after just coming back from the stewards office. “Today was good. We had 130km fighting with Nasser flat out on the salt flats, either right behind him or next to him, but he managed to get into the road at the end a little in front of us and so we lost a little time. But then he lost a wheel, he must not have tightened it properly last night, and so we were leading the rest of the special until… the TV helicopter made a massive cloud of dust and we had to stop right in the middle of the fesh fesh. And then we hit a stone and burst a tyre…”
“It’s called ‘outside influence’,” Glyn explained. “He didn’t drive the same course and conditions as the others which isn’t fair, so we’re hoping to get the time back. The helicopter crew apologised, but at this stage of the event 2 ½ minutes are very valuable.”

Peugeot are in the news twice today. I finally met someone happy to talk and the nice Cecile explained that really, everything was going to plan. “Six months ago we had nothing, so to get here and not have any real technical problems, apart from a clutch issue with Cyril Despres, is very positive. And the main thing is that with almost every kilometre we are leaning about something we can improve, so we want to get at least two cars back to Buenos Aires to learn absolutely everything we can for next year.”

The other reason that Peugeot are in the news is that because of the cold and the altitude in Bolivia last night neither car would start this morning. They were trying for half an hour and Stephane Peterhansel had 3 minutes left to get to the time control… and it was Benediktas Vanagas who pulled both cars around on a tow rope for a couple of minutes until they bump started. “Some history was almost repeated,” he said when he got back. “Do you remember the Monte Carlo rally in 1999 when the same thing happened?” Such was the gratitude for keeping the cars in the event Peugeot Sport team boss Bruno Famin came over to personally thank the team.

But it wasn’t all roadside assistance and smiles for Benediktas though as he had a hard day. The power steering on the No 339 Toyota failed with 130km left in the first section. Then there was a 250km road section and a 38km special to do. “To drive a Dakar car in the sand with no power steering is almost impossible. You have to turn the wheel with all of your strength but then 3km from the end we hit a rut or something and the wheel turned so quickly it broke my arm. But we will continue tomorrow.” At first I thought he was joking but then he showed me the huge swelling on his wrist. “I just came from the x-ray centre and after the ice pack has melted will but a support on. And then we will carry on.” And then as he walked off with a smile he uttered the immortal words I have heard many time since we left Buenos Aires over a week ago. “This is the Dakar!”

Standing up on that massive dune was a very cool experience. Robby was about half an hour later than my arms and neck really wanted to be out in the sun but he was worth waiting for… and the whole crowd lined up either side of the track shouting his name thought so too. He had a flat tyre at the end which might explain why he was not flat out on the way down, but as his press release helpfully mentioned last night, this is the first flat Toyo tyre he’s had since 2012. That is a statistic to make other suppliers weep!

I also found the Acciona team, the first fully electric car on the Dakar. It isn’t running anymore which matches quite a few people’s expectations but there was nothing wrong with the electrics, problems with the brakes and steering systems freaked the ECU out. “But we are very proud to be here,” said their press guy. “In 37 editions of the Dakar no one did anything different but we came with the first ever fossil fuel free power unit. To be the first at the Dakar is very good!”

Also all smiles are the G-Force team of Sergei Fomin and Dan Schmel. What they told me in over a snack in the giant canteen was more of a travelogue than a rally report. “It was amazing to see all the people along the roads waving the Bolivian flags. And we stayed in an army based on camp beds with about 50 other drivers. A very strange experience. But the car is good, many people had problems with water in the filters in the deep water crossings but we have the intake high up and at the back so we are OK. We drive carefully with no problems and want to get back to Buenos Aires.”

On the overall leaderboard Al-Attiyah keeps an 8:47 lead but over the marathon stage new Dakar hero Al-Rajhi has clawed back 10 minutes and is definitely in contention. Tomorrow is finally a rest day for the crews and a well deserved one. Cars will be fully serviced but one day is not really long enough for broken bones to heal…

Yamaha riders look back on the first week of Dakar 2015