Rockenfeller celebrates his championship along with ADAC award

Yesterday, the 2013 DTM Champion and the Audi Sport Team Phoenix celebrated in Neckarsulm, Germany at the Audi facilities. Today Mike Rockenfeller was named the “Allgemeiner Deutscher Automobil-Club e.V. (ADAC) Motorsportsman of the Year 2013.”

Head of Audi Motorsport Dr. Wolfgang Ullrich commented, “I think there’s no one in the DTM paddock who begrudged ‘Rocky’ the title this year. Mike not only drove a really superb season. He was also always fair in the duels with his rivals. I think this was exactly what impressed the judges, too.” 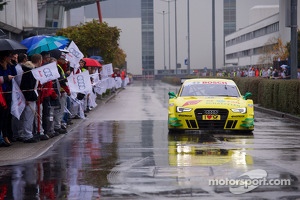 “Rocky” will no doubt continue to savor his first DTM championship. Even the rain did not dampen the spirits of the champion, the team, Audi staff nor the fans at Neckarsulm.

Being a title winner is not new to the German sportscar and touring car racer. He stood on the top step at the 24 Hours of Le Mans with Audi, of course. In 2005 with Porsche, Rockenfeller won the GT2 class on the La Sarthe circuit.

Starting in 2007, the Audi factory driver was selected to contest the Deutsche Tourenwagen Masters (DTM); a series that is highly competitive between Audi, BMW and Mercedes teams. While he has his share of struggles, Rockenfeller is now on top of the world with his team.

“When I joined Audi, my aims were to win Le Mans and the DTM – and I’ve achieved both,” said Rockenfeller.

The new champion toured the facilities in his No. 19 Audi RS 5 DTM for the victory laps in Neckarsulm to celebrate with Audi Sport staff. It was a moment “Rocky” will not forget.

Adding to his accolades was the ADAC honored Rockenfeller by naming him as their “Motorsportsman of the Year 2013” which is a very high honor selected by a panel of expert judges. Past champions include Formula One drivers Michael Schumacher and Sebastian Vettel. The remarkable lists also includes World Rally champion Walter Röhrl who has also raced for Audi.

“I know how valuable this accolade is and can only thank the judges – and of course all who have helped me win the DTM this year,” Rockenfeller. 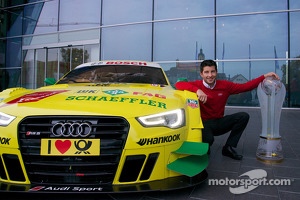 “I can only congratulate ADAC on this choice as well,” said Dieter Gass, Head of DTM at Audi Sport. “Mike is a worthy DTM Champion, a driver who epitomizes motorsport in Germany – and simply a nice guy. At Audi, we value this trait just as much as the fans in the paddock do for whom ‘Rocky’ always finds time.”