Botturi fourth in fifth stage on his Husqvarna TE449RR by Speedbrain 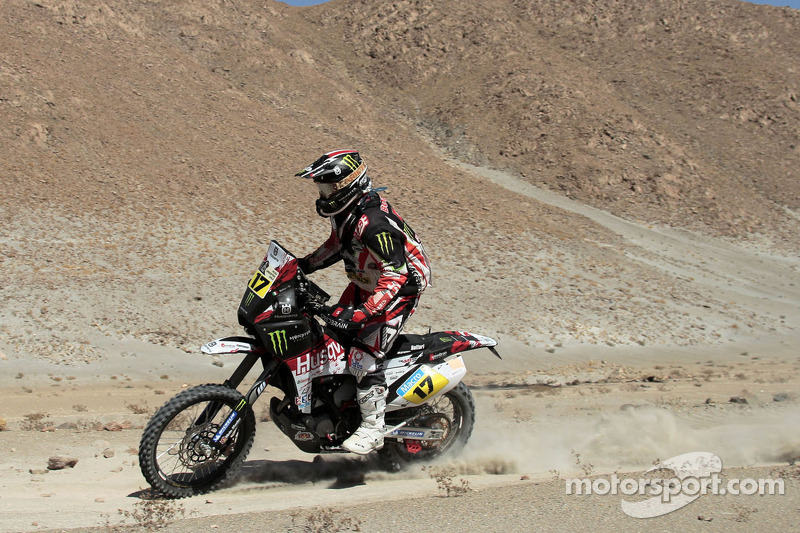 On Chile’s Arica desert, the Husqvarna team riders had success except for the early Bike leader Joan Barreda had an engine change with a penalty.

The Dakar moved into Chile’s Arica desert for the fifth stage with a slow and cumbersome 411 km (257 miles) with 136 km of special test. It almost seemed like an enduro race. In fact, it was enduro rider Alessandro Botturi who showed his true colours bringing the Husqvarna Rallye Team by Speedbrain a well-earned fourth place. After Joan Barreda’s two stage wins and Paulo Goncalves’ second place, Alessandro rode his Husqvarna TE449RR by Speedbrain into fourth place for the second time. In doing so he moves up two places in the overall standings. Now the Italian rider is in 7th place overall. 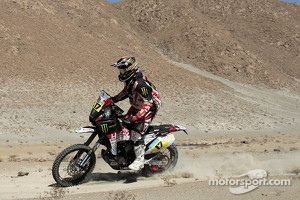 Husqvarna’s “special customer” Jordi Viladoms on a TE449RR by Speedbrain, put in his usual consistent performance, coming in sevententh today and fifth overall, moving up to lead the Husqvarna riders. The 'fesh-fesh’ and large rocks made life difficult for Paulo Goncalves in the special, where he strived not to make mistakes and finished in fourteenth place.

Likewise, Joan Barreda had an unlucky day picking up a fifteen minute penalty as for an engine change. The engine was substituted in the night as a precaution when a faulty bearing was found. Joan came in a long way behind in today special stage due problems with the gas pump helped with water-carrier Matt Fish.

Tomorrow sees the caravan roll on to Argentina with an extremely long 764 km stage (477 miles) with 454 km of special test.

Alessandro Botturi: ”I set out to win today, but it turned out to be more tricky than I’d imagined. I was unable to attack in the way I’d have liked because of the lack of visibility and the fesh-fesh, but it was a good stage for me.”

Paulo Goncalves: ”I was really careful today. It was a very dangerous stage with a very hazardous terrain. It would have been easy to fall, so I tried not to make any mistakes and get through the stage.”

Jordi Viladoms: ”I’m really pleased with my Speedbrain-Husqvarna. I’m really getting on well with it. Today was a very hazardous stage and I tried to keep a steady pace. I’m very satisfy with my fifth overall place so far.”