The 2018 BTCC runner up and Independents' Trophy winner completed some successful mileage in tricky conditions at the Cheshire venue.

The car will now be loaded up and taken to Spain to conduct further development at Circuit Calafat, starting on Monday next week.

“It’s an amazing feeling to get out on-track in the new Corolla,” said Ingram. “Ever since Toyota officially came on-board late last year, everything we’ve done has been building up to this moment.

“The car looks amazing – which is credit to all the Speedworks boys, who have done a cracking job as always – and it’s an absolute honour to be representing Toyota GB in this new British-built beast.

“Today is essentially a shakedown test, but we’ll truly be putting the Corolla through its paces in Spain next week and I can’t wait to see what it can do!”

Team boss Christian Dick said he was thrilled with the initial mileage on the new machine.

“We can sleep a little easier now,” said Dick. “It was just a relief to get here and make sure it all worked.

“We didn’t run first thing in the morning and the reasons were two-fold: the circuit was very wet and they were running the session on the International layout, which we don’t use.

“We used that time to do an extra spanner check and sort through a few small teething issues, but then we went in the afternoon.

“The initial feedback from Tom has been great and really positive. We have had no dramas whatsoever.”

The Corolla ran in a camouflage livery at Oulton Park, and the full colour scheme is expected to be revealed at the BTCC media day at the end of March. 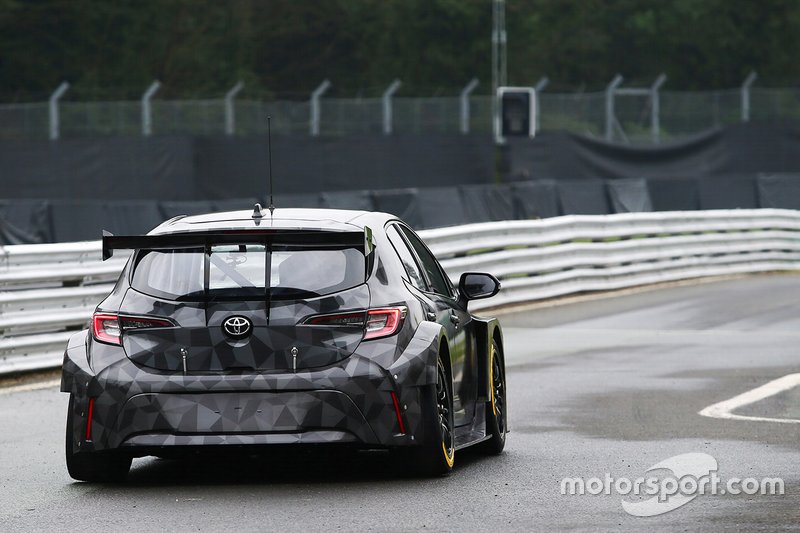