Jonathan Rea has explained his crash out of the lead in Sunday's final World Superbike race at Donington Park that handed the championship lead to Toprak Razgatlioglu.

Yamaha rider Razgatlioglu arrived at Donington trailing Kawasaki rival Rea by 20 points, but left the British track with a narrow two-point advantage after winning both full-distance races of the weekend.

Having finished a distant second to a rampant Razgatlioglu on Saturday, Rea prevailed in damp conditions during Sunday morning's Superpole race to give himself pole for the finale.

An entertaining tussle between the championship protagonists followed, but came to an end on lap 11 of 23 as Rea suffered a low-side crash coming through Coppice corner, giving him his first non-score of the season.

It also meant the reigning champion conceded the points lead to Razgatlioglu, who was unchallenged on his way to a third win in the last four races.

"I felt really good with the bike for Race 2," recalled Rea. "The guys made a really good change overnight, a wheelbase change, and a different rear tyre [the SCX qualifying tyre].

"I made a small mistake behind Toprak and I let him get away, and I thought, ‘this is my race’. I was able to catch him easily. Then he made a mistake [at Coppice], then when I went to the front, I put my head down.

"I got caught out; I was on the bumps on Coppice going up the hill, and as soon as I tipped in, the front totally washed out. Frustrated, because I made a mistake and the guys gave me a great bike." 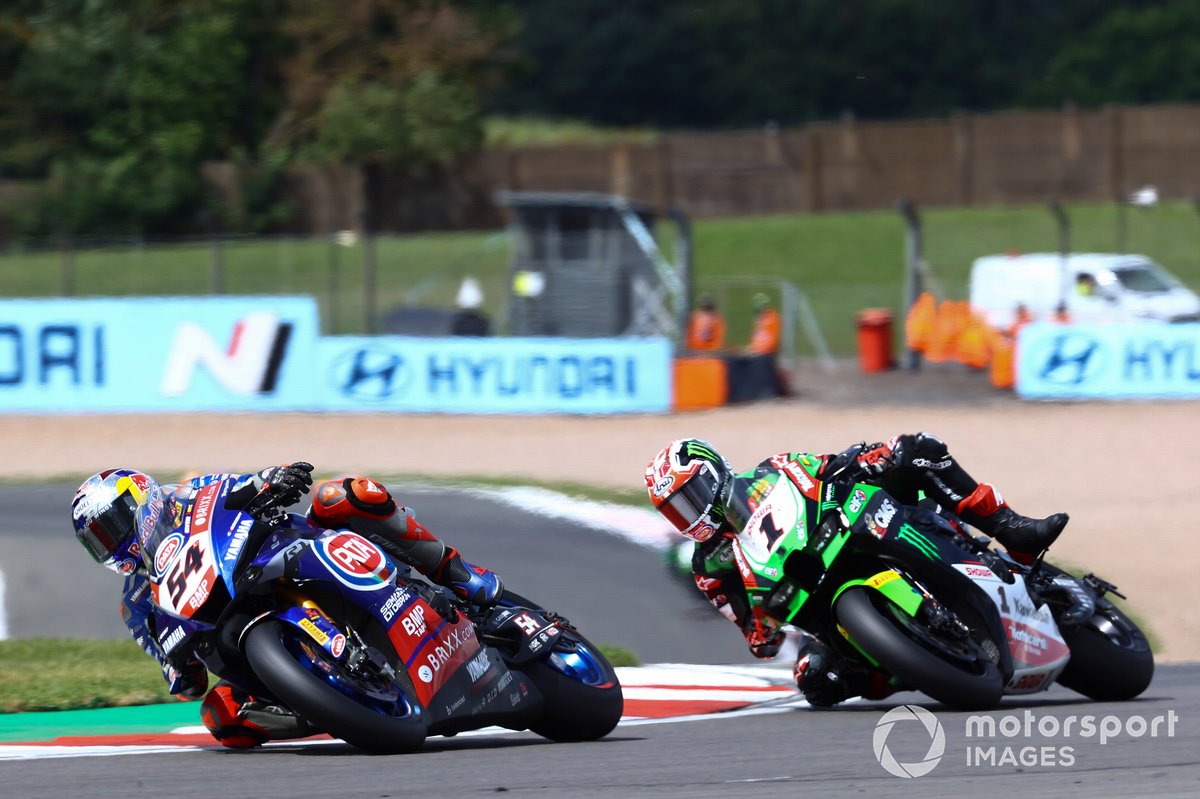 Despite the crash, Rea was eager to take away the positives of being much more competitive on Sunday relative to Razgatlioglu, having had no answer to the Turk's searing pace on Saturday.

"I was almost more disappointed yesterday," he said. "I had nothing for Toprak [in Race 1], but [on Sunday] I did. So it’s bittersweet.

"I feel a lot more positive going forward for the season, that we can fight at a difficult track where there’s a lot of changes of direction and the bike needs to turn well."

Razgatlioglu "not looking" at points situation

For his part, Razgatlioglu admitted that he was simply content to follow in the wheeltracks of Rea after he ran wide at Coppice on lap 10 to hand the lead to the Kawasaki rider.

But the 24-year-old, who has committed his immediate future to Yamaha and WSBK despite speculation of an imminent MotoGP move, insists his mind is not on the championship situation.

"For me it was not easy, every lap I was pushing for the win," said Razgatlioglu. I was following Johnny as I had less grip on the track like [on Saturday], three times I lost the front tyre and I say, ‘ok, I follow Johnny’.

"Then he did a big mistake and crashed, and after I try to just do consistent laptimes for the race."

He added: "I’m not looking at the championship points, I am focussed always on the race. Just I try and get a good position and we’ll see."