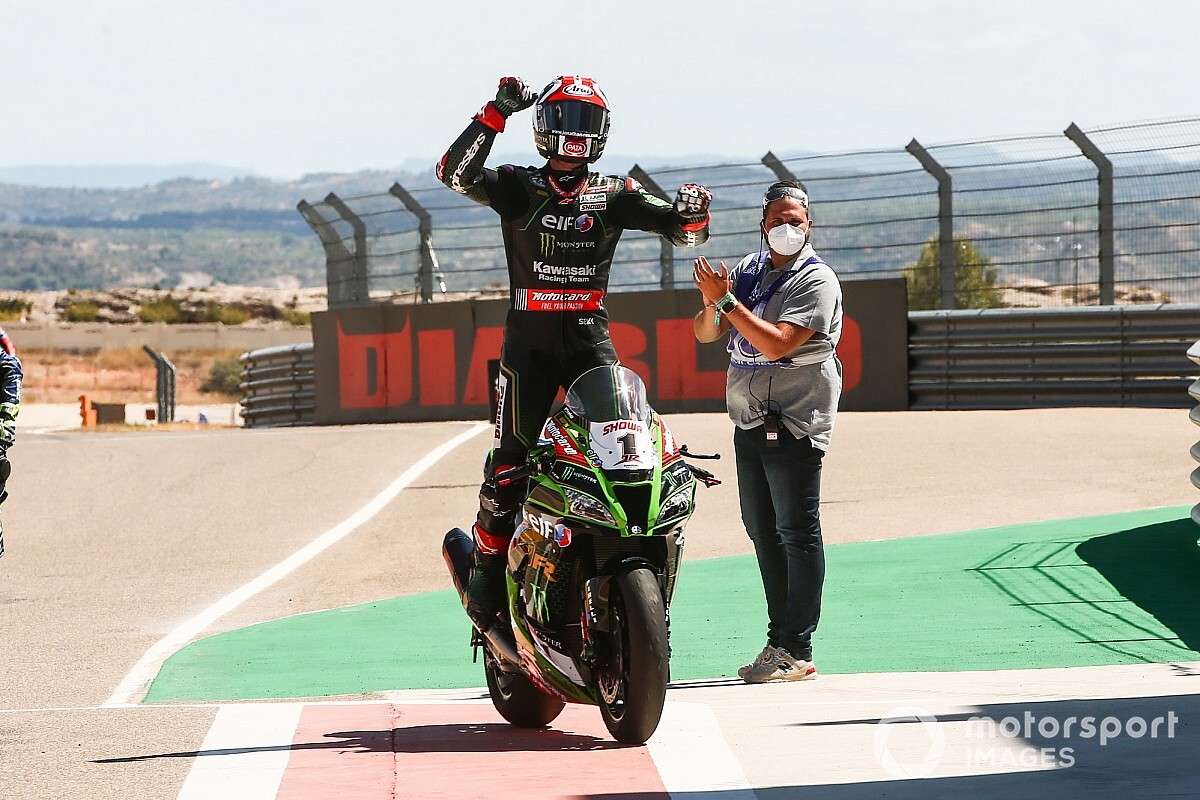 Jonathan Rea won the second Aragon World Superbike feature race ahead of Chaz Davies despite making a late mistake and losing the lead.

Erstwhile championship leader Scott Redding got the best launch off the line, but Rea muscled his way into the lead at Turn 1 after the Ducati rider ran slightly wide and immediately built up a small gap.

Michael van der Mark demoted Redding at Turn 12 to third, before a mistake for the British Superbike rider at the end of the second tour allowed Alvaro Bautista on the Honda up into the podium places.

Davies worked his way up to fourth ahead of his teammate Redding by lap three, while Rea’s lead over the chasing van der Mark was up to 1.8 seconds.

The Ducati of Davies found its way into third ahead of Bautista on lap four at Turn 13, with the Welshman demoting van der Mark three corners later.

Davies then began his charge on Rea, with the gap fluctuation between 1.2 and 1.7s for much of the next 10 laps.

With six laps to go, Davies was just 1.2s behind Rea, with the Kawasaki rider outbraking himself at the end of the following tour at the final corner and running off track.

This allowed Davies to power ahead into Turn 1, though Rea launched his ZX-10RR up the inside of the Ducati at Turn 4.

Davies retaliated at the next corner, though Rea got the upper hand on the exit and established a slight half a second lead.

Despite Davies’ best efforts, Rea fended him off to claim his second win of the day and moves 10 points clear of Redding, who was fourth having opted for a different front tyre to the one he ran in the first feature race.

Bautista was the only ride to go for the SCX Pirelli tyre, designed for the 10-lap sprint race, and once through to third was able to keep the leaders in sight.

The Spaniard crossed the line in third to tally up Honda’s first podium with the new Fireblade, having scored its previous best of fourth in the sprint race.

Michael Ruben Rinaldi worked his way up to complete the top five on the Go Eleven Ducati ahead of a fading van der Mark, while Leon Haslam on the second Honda prevailed in a tight tussle of seventh ahead of Yamaha’s Toprak Razgatlioglu, the Kawasaki of Alex Lowes, GRT Yamaha’s Garrett Gerloff and Puccetti Kawasaki’s Xavi Fores.