Former MotoGP racer Eugene Laverty says his exit from the Shaun Muir Racing World Superbike squad was made “so stressful” by its last-minute nature.

By:
Jamie Klein
Co-author:
Oriol Puigdemont
Listen to this article

Laverty was left in the cold when SMR, which ran factory-supported Aprilias in WSBK this year under the ‘Milwaukee Aprilia’ banner, signed a deal to become the works BMW team.

After several weeks of uncertainty, Laverty finally managed to find a ride for the 2019 campaign, joining forces with the privateer Go Eleven team to ride a new Ducati V4 R.

But the 32-year-old admitted that the prospect of being left on the sidelines was “scary”, sympathising with other riders that have not yet been able to secure a ride.

As well as Savadori, Loris Baz and Xavi Fores are two other names in the WSBK field who have been left in the cold, although Fores has signed a deal to race for Honda in British Superbikes.

“It’s been so stressful, honestly, because being left with nothing at the end of the October is never ideal,” Laverty told Motorsport.com at last weekend’s ‘100km dei Campioni’.

“I’m very fortunate to have picked something up because there are still some other riders in Superbike who are left with nothing, and that’s what’s scary.

On his prospects for 2019, the former Aspar MotoGP rider added: “I know Ducati always give their customers a really good level of bike, like Barni Racing this year with Fores. He was able to fight with the factory guys. That’s really the aim.

“It looks like they’ll be fighting at the front with Kawasaki. Still Johnny [Rea] has a little bit extra, we need to catch him, but in the first test the bike has been very impressive.”

After learning he was not part of SMR’s 2019 plans, Laverty travelled to the MotoGP paddock in Malaysia to meet with Aprilia to explore options to remain on the WSBK grid.

These came to nothing however, and as a result the Noale firm is set to be absent from the production-based championship for the first time since 2008 next year.

Laverty continued: “I flew to Qatar for our last race [in WSBK] and my plan was to fly home from Qatar.

“In the end I had to change my flight to Kuala Lumpur to speak there with Aprilia, because at the time we were trying to make something happen to keep the RSV4 on the grid.

“Unfortunately it wasn’t possible, but it’s part of the job. When you don’t have one you have to search everywhere. I kept fighting, I didn’t give up.” 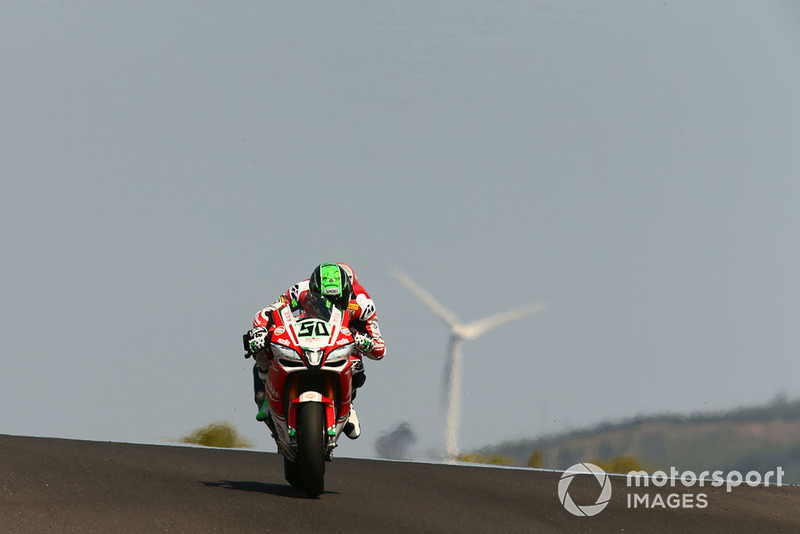