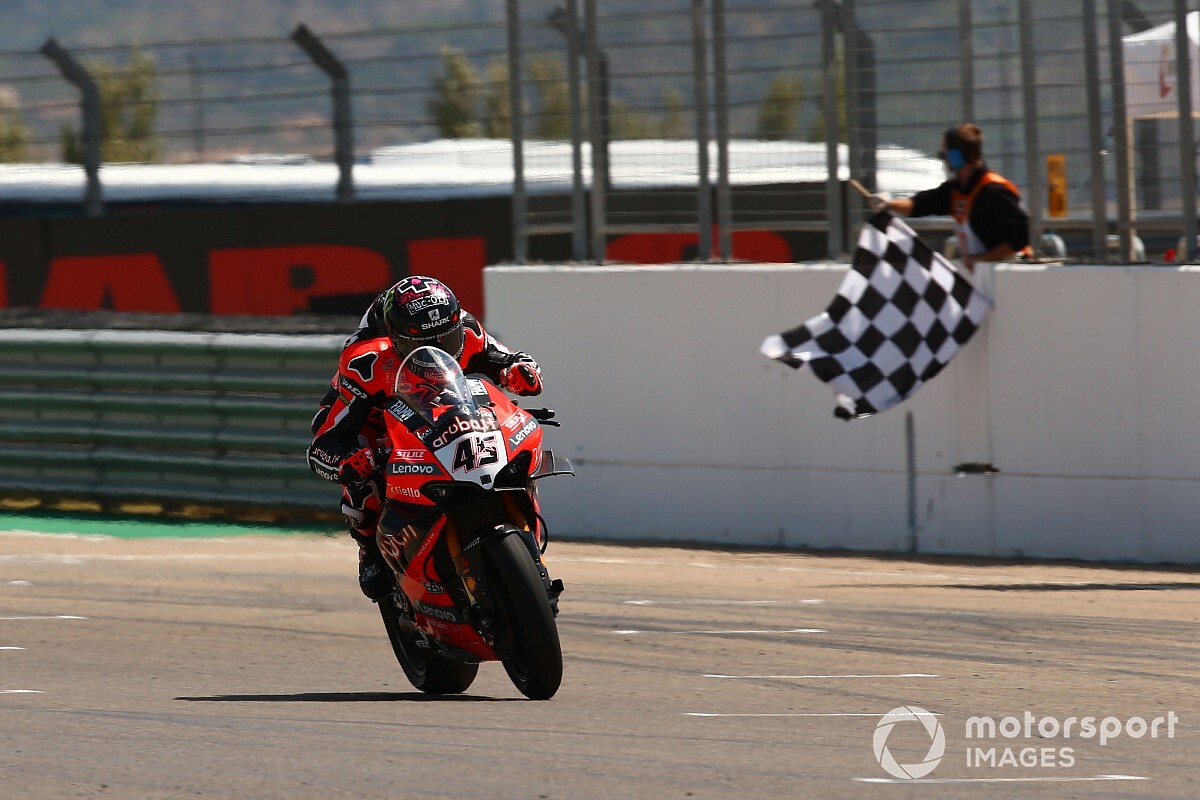 Scott Redding led a 1-2 finish for Ducati in the first World Superbike race at Aragon, as Kawasaki’s Jonathan Rea lost his championship lead after finishing third.

Rea made a sluggish start from pole to drop to fourth in the opening sequence of corners, but managed to claw back lost positions in no time, passing teammate Alex Lowes into Turn 12 to retake the lead of the race.

Redding settled into third place after repassing Loris Baz, who got the holeshot into Turn 1 but couldn’t sustain his lead beyond a few corners.

As Baz started dropping further down the order, the top three pulled away from the rest of the field, with Rea leading the race by a narrow margin from Lowes and Redding.

On lap 5, Redding ended the status quo by passing Lowes into the penultimate corner, before setting about chasing Rea for the lead.

Moments later, Lowes suffered a massive highside at the exit of Turn 3, and was lucky to avoid being collected by the chasing pack as they navigated their way around the fallen Kawasaki rider.

Despite the severity of the crash, the race was able to continue without any interruption, with Redding chasing Rea hard for the lead.

Two laps later, Redding drew alongside Rea on the start/finish straight, with the British rider able to take advantage of Ducati's extra power to take the lead going into turn 1.

After losing the top spot, Rea sat back behind his title rival, the gap between the two never extending beyond 0.3s as the Kawasaki rider kept up the pressure on the race leader.

With four laps to go, Rea attempted to pounce on Redding into Turn 12, but the Ducati rider managed to hold onto the lead.

Rea himself ran wide at the exit of the corner, allowing Chaz Davies to close the gap and then snatch second place from him at Turn 2 on the following lap.

Once in second, Davies was lapping faster than Redding but couldn’t close the gap enough in the final three laps, the reigning British Superbike champion hanging on to win by 0.3s and claim the championship lead from Rea.

Toprak Razgatlioglu was next in sixth on the second of the factory Yamahas, marking a remarkable turnaround for the Japanese manufacturer after its two bikes qualified down in eighth and 11th for the race.

Honda riders were unable to convert their strong qualifying pace into a top five race result, with Leon Haslam finishing 10th and Alvaro Bautista crashing out with six laps to go while running eighth.

BMW endured a difficult race as Eugene Laverty could muster only 16th place, finishing nearly a minute down on Redding, while Tom Sykes retired early on.