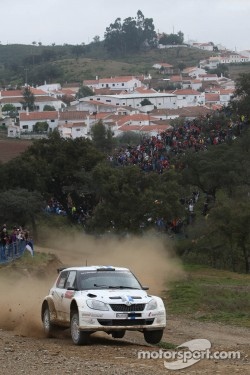 With another strong performance Sébastien Ogier and his co-driver Julien Ingrassia took victory for Volkswagen in the S2000 class at Rally Portugal. In the overall classification, the French duo that had won the WRC class in Portugal in the past two years again managed the leap into the top ten – in eighth place – and scored four championship points. Turbulent weather changes caused extreme track conditions on the 368.43 kilometres of special stages. After the rally, the Volkswagen team is staying in Portugal for tests with the Polo R WRC.

Volkswagen Motorsport Director Kris Nissen: “In view of the chaotic weather conditions and the large field with 19 WRC cars eighth place is an optimum result. Sébastien and Julien did a perfect job. It was also good to see how calm and professional the team was in performing its work in such difficult conditions.”

After the ceremonial start on Thursday, Ogier had lost time on the first night stages due to clutch problems. In torrential rain on Friday, Ogier and his co-driver Ingrassia were struck by misfortune in a major way. On the fifth special stage a competitor, who had started just before them, stopped in the middle of the track and blocked the way. As a result, the Volkswagen factory driver lost 1m 19s through no fault of his own. Ogier: “We lost a lot of time behind Craig Breen, who stopped at the end of a water passage. There were spectators on track to help him and as we didn’t want to jeopardise anyone we patiently waited. Unfortunately, we weren’t credited for this time.”

In chaotic weather conditions with fog, deep mud and flooding, special stages 8 to 10 were even cancelled. “Considering the extreme conditions I’m happy to have safely reached the finish. Without the time loss we would have even clinched sixth place in the end, which would have marked the best result of an S2000 car in WRC history. So, now it’ll remain a goal for the current season,” said Sébastien Ogier. Overall winner of Rally Portugal was the Finn Mikko Hirvonen. The second Skoda S2000 with Volkswagen junior driver Kevin Abbring and co-driver Fréderic Miclotte was unfortunately prevented from competing in the rally on the Atlantic coast. After an accident in qualifying on Wednesday, the roll cage was so heavily damaged that the FIA prohibited the start for safety reasons according to the regulations. At Rally Argentina from 27 to 29 April, Volkswagen junior Andreas Mikkelsen will run together with co-driver Ola Fløene.

On Monday and Tuesday, former World Rally Champion and Volkswagen adviser Carlos Sainz and Sébastien Ogier will subject the Polo R WRC to a performance test in order to gather valuable measurement results on the way towards the WRC entry in 2013.

This season, Volkswagen is contesting World Rally Championship events with two Fabia S2000 cars of the Group’s Škoda brand in the less powerful S2000 class. The runs serve as preparation for the 2013 season in which Volkswagen will be competing in the top category of rally racing with the Polo R WRC.