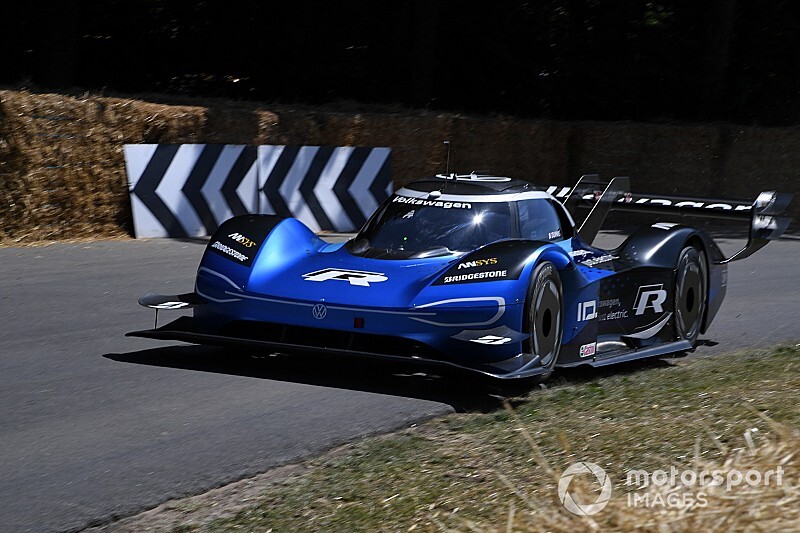 The Volkswagen ID.R electric prototype has broken the 20-year-old record set by a McLaren Formula 1 car for the fastest run up the Goodwood Festival of Speed hillclimb.

The ID.R – driven by Le Mans 24 Hours winner Romain Dumas – broke the electric record at the same event last year and was just 1.45 seconds short of usurping Heidfeld’s time set in the MP4/13 in 1999.

The ID.R has been "optimised for sprint" according to VW technical director Francois-Xavier Demaison and, as a result, it ran with fewer batteries to save weight and completed its hillclimb on soft compound Bridgestone tyres.

On Friday, Volkswagen's machine set a time of 41.18 seconds to beat the previous record of 41.6s previously held by Heidfield and McLaren.

“We improved a lot compared to last year, so that also is definitely positive and we worked a lot,” said Dumas. “It was definitely fun.

“It was a little bit stressful with the weather for the rest of the weekend so we tried to push today, but tomorrow I hope we can go a little bit quicker.”

Sven Smeets, Volkswagen's motorsport director told Motorsport.com it was "better" that the record run was completed on Friday, adding: "We didn’t expect to do it so early, but I also don’t wish it had happened on the last run [on Sunday] because [what] if something goes wrong?

"Now we can work tomorrow afternoon and Sunday afternoon a little bit for a different feeling. Still, apparently, there are some things we can improve to try and get under this 41 [second time]. We have to give ourselves a new target.

“This hillclimb is quite flat and not too bumpy so you can go more like a race car. The car is not so heavy as at Pikes Peak.”

Pushed on what time he thought the ID.R was now capable of, Dumas added: “Now I have no pressure, so that’s good. Goodwood is a tricky place, you never know what can happen.

“The track can be a little bit dirty with cars going in front of you and so on. Hopefully tomorrow I would like to go on a 40[s] would be nice. Which 40, low or high, I don’t know. We will try our best and we will see.”

The car has already broken records at Pikes Peak and at the Nurburgring before it arrived at Goodwood for a second attempt.

Dumas was able to celebrate his new record in person with Heidfeld at the top of hill, who had run before him in a Mahindra Formula E car.