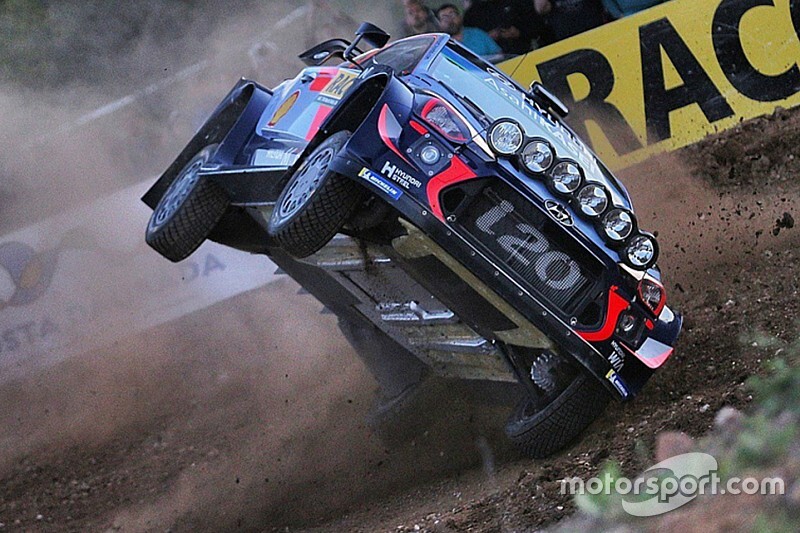 WRC points leader Thierry Neuville suffered the worst possible start to this week’s Rally of Spain when he rolled his Hyundai during shakedown.

The Belgian got caught in the ruts at a right-hand corner early in the 1.2-mile test and the Hyundai rolled and came to rest on its roof.

The shakedown stage was stopped while the car was recovered, but Neuville will not have time to take another run before the season’s penultimate WRC round gets underway in Barcelona on Thursday evening.

“It was a square right,” the championship leader told Motorsport.com. “The car started to lift, so I tried to steer out. But it knocked the tyre off the rim, the rim was caught in the rut and we started to roll. It was very, very slow speed.”

Neuville said the incident would have no effect on his performance at the Salou-based event this week.

“[Shakedown] counts for nothing,” he said. “The boys will fix the car and we try to make a better start tonight. The damage is to the windscreen, a steering arm and maybe we need a radiator.

“I can’t get out [to drive shakedown] again, but this one is not really a shakedown.”

Neuville is no stranger to shakedown incidents, having crashed in Germany and Finland previously. His first WRC win came after he rolled his Hyundai into the vineyards in 2014.

“That was much bigger [crash],” he said. Maybe I should have made this one a bigger crash to make sure we have the luck again here!”

The Rally of Spain starts with an all-asphalt run around Barcelona’s Montjuic Park on Thursday evening, before the first full day of gravel action on Friday.

Friday night means a complete change of set-up for the World Rally cars, with a weekend of asphalt action ahead of them in the WRC’s only mixed-surface event.