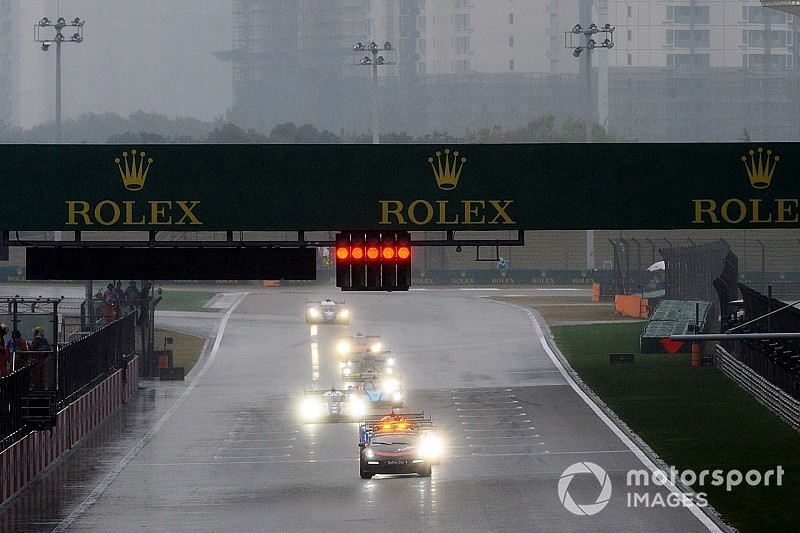 The Shanghai FIA World Endurance Championship round has been red-flagged after six laps behind the safety car.

Wet conditions meant the race started under yellow flags and multiple incidents as cars struggled to stay on the track behind the safety car forced the stoppage.

The incidents included a spin for Thomas Laurent in the #3 Rebellion R-13 out of the Turn 6 right-hand hairpin. The Frenchman sideswiped the barrier and came straight into the pits for repairs.

Further down the order, Tommy Milner spun the Chevrolet Corvette C7.R at the final corner, while Enzo Guibbert also had an off that dropped the #50 Larbre Competition Ligier down the order.

An update from the race director is scheduled for noon local time (4am GMT), but weather forecasts suggest no abatement in the rain over the course of the day.

Two laps of green-flag running need to be completed for half-points to be awarded.

UPDATE: Organisers have announced they will attempt to restart the race at 12.10pm local time (4.10am GMT).

UPDATE 2: The race resumed on schedule behind the safety car, and after two more laps began in earnest.

However, the green-flag running lasted only four laps until Salih Yoluc caused a safety car when he got the #90 TF Sport Aston Martin beached in the gravel at the last corner. A second red flag followed shortly after.

There were lead changes in three of the four classes, with the two Toyotas swapping positions at the head of the field.

Jose Maria Lopez ran wide in the #7 Toyota TS050 Hybrid at the Turn 14 hairpin, allowing the sister #8 machine of Sebastien Buemi through into the lead.

LMP2 is now being led by the #31 DragonSpeed Oreca of Anthony Davidson, who passed both Jackie Chan DC Racing cars to assume that position.

The GTE Pro pole-sitting Ford GT of Olivier Pla was nerfed into the gravel at Turn 1 by the Porsche of Kevin Estre, who now leads the class ahead of the two Aston Martin Vantage GTEs.

Aston Martin continues to lead in GTE Am with Paul Dalla Lana at the wheel of the #98 car.