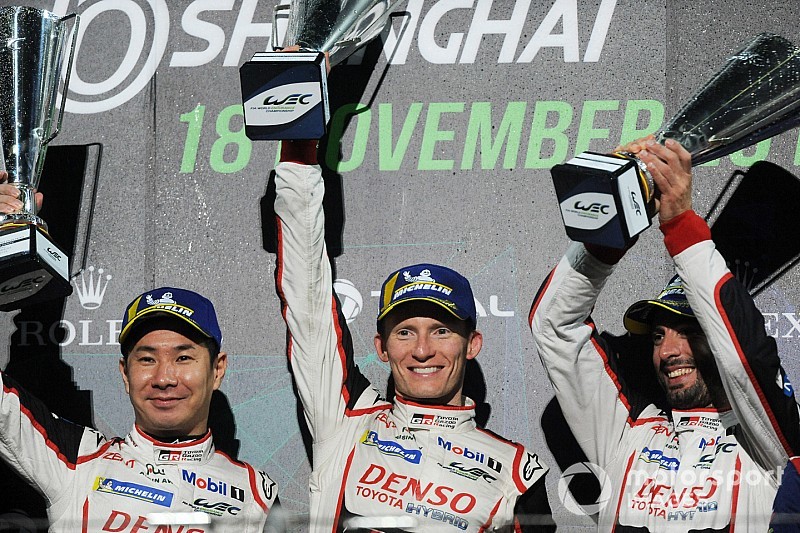 Mike Conway, Jose Maria Lopez and Kamui Kobayashi scored their second win in a row in the #7 TS050 Hybrid over the sister #8 car shared by Fernando Alonso, Kazuki Nakajima and Sebastien Buemi.

Heavy rain caused two lengthy stoppages in the opening half of the race, and it wasn't until hour four that conditions improved sufficiently to allow serious green-flag action to commence.

The order was mixed up as different cars made their first pitstops at different times, but the superiority of the Toyotas over the non-hybrid LMP1s was clear and the two TS050 Hybrids quickly hit the front once the race began in earnest.

It was the #8 car that had been ahead during the early stages after a mistake by Lopez in the first few green flag laps allowed Buemi by, but the #7 jumped back ahead because it made its second stop a lap earlier than the sister car on a lap that the field was being led through the pitlane by the safety car.

The #8 also lost further time being held up by a red light at the end of the pits, handing the #7 car an advantage of some 20 seconds.

That grew to as large as half a minute before Nakajima began to close the gap to Conway, but the safety car was deployed again with 20 minutes to go after a crash for the #17 SMP Racing BR Engineering BR1.

The two Toyotas held position in the final six minutes when the safety car came in, Conway crossing the line 1.4 seconds clear of Nakajima.

Jenson Button secured his first podium of the year in the surviving #11 SMP BR1 he shares with Russian duo Mikhail Aleshin and Vitaly Petrov, a lap down on the winning Toyota.

The final safety car wiped out the #11 car's advantage over the #1 Rebellion R-13, but Neel Jani, Bruno Senna and Andre Lotterer had to be content with fourth after Lotterer dropped 16 seconds in the wet closing stages.

The #3 Rebellion lost two laps early on when Thomas Laurent hit the barriers under the safety car, but the first stoppage allowed the car to be repaired and it recovered to fifth, three laps down.

DragonSpeed's customer BR1 made it to the finish in sixth, while the solo ByKolles ENSO CLM P1/01 dropped out with engine failure, parking up on the main straight and dumping oil on track.

LMP2 honours went to Jackie Chan DC Racing for the third time in a row, with Ho-Pin Tung, Gabriel Aubry and Stephane Richelmi picking up their second victory of 2018.

The #38 Oreca trio came out on top in a straight fight with the #31 DragonSpeed machine shared by Anthony Davidson, Pastor Maldonado and Roberto Gonzalez, despite two late spins for Aubry.

Third in class went to the #36 Signatech Alpine entry, but only after the #28 TDS Racing car, which was set for the place, found itself in the pits at the finish because of a drive-time mix-up and therefore wasn't classified.

The Fuji-winning #37 Jackie Chan Oreca lost a lap when Weiron Tan suffered an off at Turn 2 and ended up fifth in class.

Aston Martin secured its first victory in the GTE Pro class with its all-new Vantage GTE, as the #95 car finished seventh overall ahead of the LMP2-winning #38 Oreca.

The #95 shared by Nicki Thiim and Marco Sorensen took full advantage of the British marque's speed in the wet conditions, as both Astons stayed at the head of the class for much of the race after cycling ahead in the early pitstops.

However, the #97 car of Alex Lynn and Maxime Martin - which lost out to the sister car with a green-flag pitstop and was left on old tyres for the finish - was reeled in and passed with around 30 minutes to go by Richard Lietz in the #91 Porsche 911 RSR he shares with Gianmaria Bruni.

Christensen's teammate Kevin Estre escaped sanction after tapping the pole-winning #66 Ford GT of Olivier Pla into a spin during the first batch of green flag laps.

Ferrari's best representative was the #51 car of James Calado and Alessandro Pier Guidi in fifth, followed on the road by the lead BMW M8 of Martin Tomczyk and Nicky Catsburg in sixth.

However, Tomczyk was issued with a 23-second time penalty for making contact with the Ford of Harry Tincknell, dropping the #81 BMW to ninth.

Corvette's lone one-off C7.R entry was 10th on the road, but was promoted to eighth by both the Tomczyk penalty and a separate offence for the #67 Ford relating to a safety car pitstop violation.

The Dempsey-Proton squad recovered from the blow of losing all the points it has scored so far in the 2018/19 season by taking victory in GTE Am.

Matt Campbell, Julien Andlauer and Christian Ried came out on top in the #77 Porsche, 8.7s ahead of the Project 1 car shared by Fuji winners Jorg Bergmeister, Egidio Perfetti and Patrick Lindsey.