Porsche is still on a "learning curve" and isn't "100 percent there" on pace with its all-new GTE Pro contender, according to the drivers that gave it a debut win at Silverstone last weekend.

Gianmaria Bruni and Richard Lietz took victory in the first race appearance for the all-new 911 RSR-19, leading home a one-two for the Weissach marque in the opening round of the 2019/20 FIA World Endurance Championship season ahead of Kevin Estre and Michael Christensen.

It came after both Porsche crews were outpaced in qualifying by rival marques Ferrari and Aston Martin, with strategy and quick pitstops proving pivotal to the final outcome.

Bruni was keen to emphasise that, despite undertaking an extensive testing programme stretching back to April 2018, the Weissach brand is still "learning" about its new car.

"I know the guys were very good on pitstops, I knew we had some advantage there because we were training hard all these two months [in the off-season]," said Bruni.

"We saw the car in practice was really consistent and really nice on the tyres. So the strategy was just to be as close as possible to the others, and then make the difference in the pitstops. Also in the last pitstop, we only changed two tyres, which was a really good call.

"It’s a dream, but we work very hard, the car is very consistent. It’s more consistent and gentle on the tyres [than the old car], but we’re still in a learning curve."

Lietz added: "I think for the new car we learned a lot, so for sure we have to analyse all the data and come back strong in the next races because pace-wise we were not 100 percent there. But strategy-wise and pitwork was fantastic, and Gimmi [Bruni] at the end did a great job.

"After developing the car for one year, it’s a fantastic start for Porsche and maybe it releases some pressure for the guys who developed the car."

Bruni and Lietz cycled into the lead at Silverstone during a mid-race rain shower, in which the two Porsches were the only GTE cars to equip wet tyres.

After the safety car bunched up the field again, the #51 Ferrari of Alessandro Pier Guidi passed both Porsches to take the lead, only to drop back behind them in the final round of pitstops before serving what transpired to be an erroneous drive-through penalty.

But Bruni feels he could have held off Pier Guidi a second time if needed, because the first time he had been forced off-line by the #29 Racing Team Nederland Oreca LMP2.

"I didn’t get passed properly, it was an LMP2 that hit me," said Bruni when recalling the first time the Ferrari passed. "Going into Turn 1 [Abbey] this LMP2, the Jumbo car [RTN Oreca], put me on the dirty stuff, it took me two laps to clean the tyres.

"I was passed by Ale [Pier Guidi] and the [#97] Aston. And then there actually it was a lucky moment because the engineer called me in, we put only two tyres on the left-hand side, and then we were able to make the gap ahead of the others.

"At the final pitstop we came out first, #92 second and the Ferrari third, then the Ferrari had a drive-through penalty." 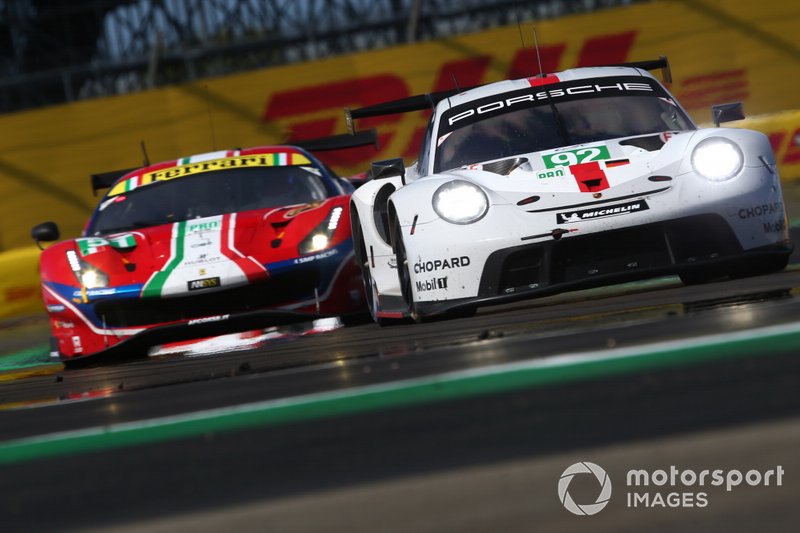 Ginetta just needs to "get organised" for Fuji