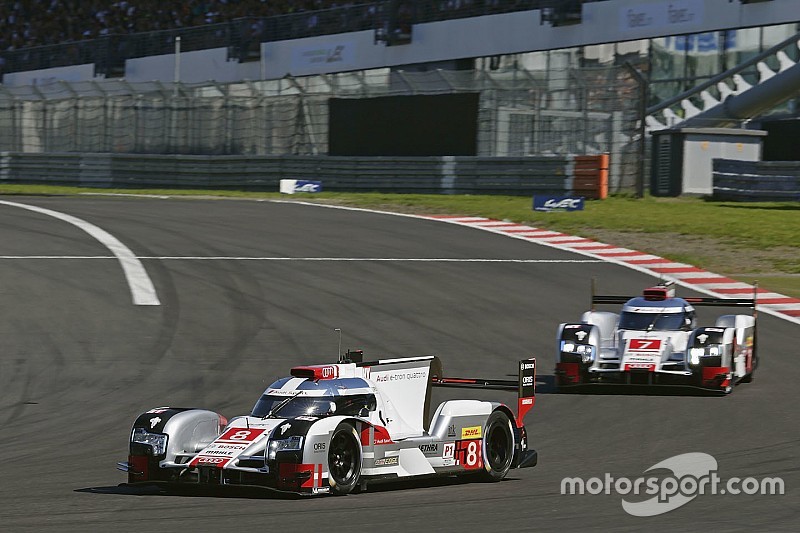 Audi has confirmed it will retain its factory drivers in the World Endurance Championship and the DTM for 2016.

The German manufacturer is represented by the #7 and the #8 machines in WEC and the line-ups for both will stay unchanged.

Andre Lotterer, Benoit Treluyer and Marcel Fassler - 2012 FIA WEC champions and three-time Le Mans 24 Hours winners - will pilot the #7 Audi, while 2013 WEC champion Loic Duval will be once more joined by Lucas di Grassi and Oliver Jarvis in the #8 car.

Lotterer, Treluyer and Fassler had missed out on the 2015 drivers' title by five points, with Duval/di Grassi/Jarvis coming in joint fourth place.

Despite a 2015 DTM season that saw Audi miss out on all three of the category's major titles, all eight drivers have been retained for 2016.

Team Abt will be made up by Mattias Ekstrom, Miguel Molina, Nico Muller and Edoardo Mortara.

The announcement leaves no place in the team for Antonio Giovinazzi, who substituted for Scheider at Moscow.

Both Audi and Porsche are to scale down to a two-car LMP1 entry for the 2016 24 Hours of Le Mans, the manufacturers having each fielded three cars in 2015.

For Porsche, this means the #19 will not defend the title and casts serious doubt over the participation of Earl Bamber and Nick Tandy - with Nico Hulkenberg having already been seemingly ruled out due to a clash with the Formula 1 Baku race.

On Audi's end, Marco Bonanomi, Rene Rast and Filipe Albuquerque, who piloted the #9 entry, are also left out.