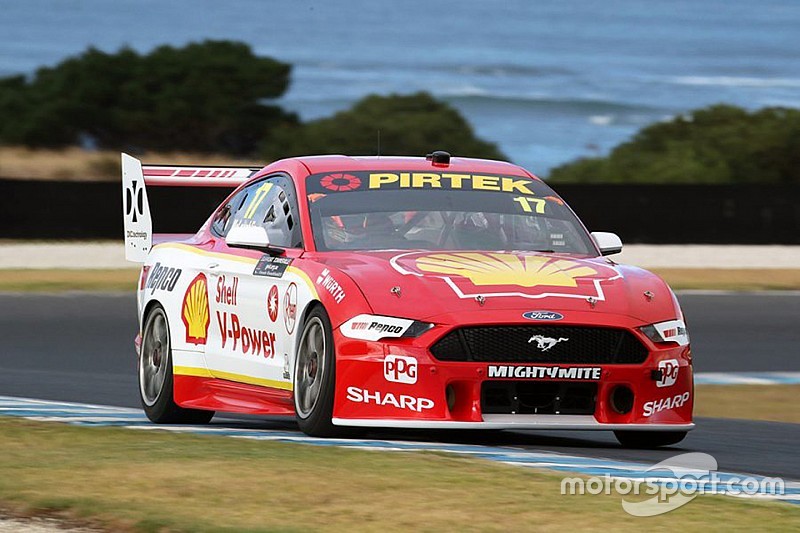 Scott McLaughlin says he and the DJR Team Penske squad were 'shocked' by the impact of the switch to a linear spring during yesterday's pre-season Supercars test.

The entire Supercars field was forced to run linear springs at the Phillip Island test, thanks to a new-for-2019 rule banning multiple-spring units.

According to reigning series champion McLaughlin it caused a big re-think in set-up at DJRTP, and created more work than the move to the new Mustang aero package.

"It probably shocked us more trying to get used to the new linear package [than the aero]," said McLaughlin, who finished the day eighth quickest.

"The linear spring was a big thing, trying to get used to how to drive it and how to give feedback back to [engineer] Ludo [Lacroix].

"I really enjoy that; it's cool because you've got to drive around it.

"I felt like we had a really solid day getting used to that. I feel like we were okay at the end."

McLaughlin added that the move could spice up the racing this year, as drivers are forced to work harder on the more simple package.

"I think we'll see it will really come out in a lot of drivers, having to find that limit," he said.

"Qualifying will be cool because people will be spraying it.

"You could have a handful of drivers that can drive that way, and another handful that can't. But during the race I think it's going to chew the rear tyres up a lot more."

Triple Eight team manager Mark Dutton, whose squad struggled with the linear spring change at Phillip Island yesterday, agreed that compromises will be required under the new rules.

"You shouldn't, in theory, make the car handle as well [as with the twin-spring] because you were running the twin or multiple packages [in the past] for a reason," he said.

"It was quicker, and you could have a better-handling car. Ptherwise you would have run the linears, because you had the choice to.

"In theory you shouldn't be able to achieve as optimum a car in that regard, but also everyone's understanding [will get] a bit better, the cars get refined, so that's not to say the lap times are going to be massively slower.

"But if they are quicker, then you think they should be even a little quicker again if you were allowed to run the multiple spring packages."

The texts that set up Tander's surprise Triple Eight debut