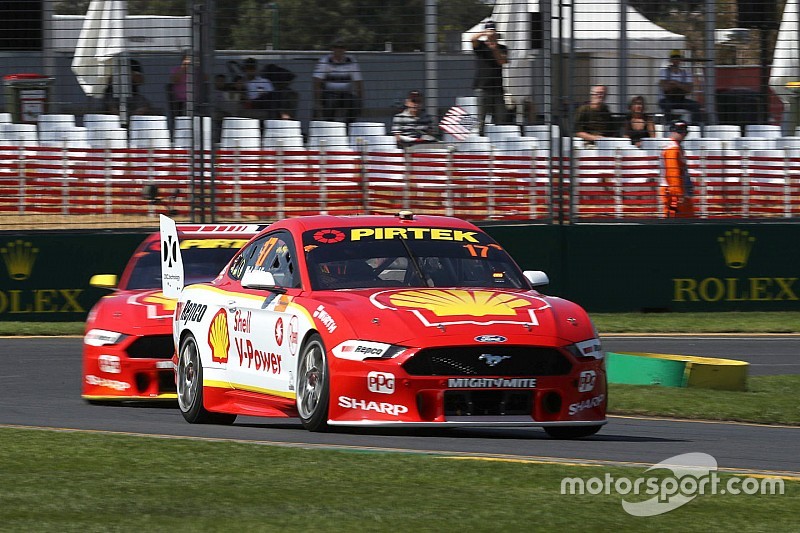 Anton De Pasquale was the early pacesetter with a 1m56.414s, before the Shell Mustangs took over from the eight-minute mark onwards.

It was Fabian Coulthard that lowered the benchmark first with a 1m55.957s, that time bested by teammate McLaughlin's 1m55.851s at the mid-way point of the session.

The Erebus driver was immediately swamped by Chaz Mostert and Jamie Whincup, who went first and second with a 1m55.171s and 1m55.353s respectively.

David Reynolds and Cam Waters both had cracks at top spot right on the flag, the Tickford driver going closest with a time less than a tenth shy of Mostert.

McLaughlin then bulldozed his way to the top to the tune of six-tenths with a 1m54.551s right at the death, Coulthard only able to close the gap to two-tenths on his qualifying sim lap.

Mostert slipped back to third thanks to the Penske Fords' late improvement, followed by Waters, Reynolds and Whincup.

Nick Percat ended up seventh in the late rush despite complaining of a faulty dash, De Pasquale was eighth, and Tickford pair Lee Holdsworth and Will Davison rounded out the Top 10.

Shane van Gisbergen was outside the first 10 for a second session running, the Kiwi just 20th despite getting a full session of running under his belt.