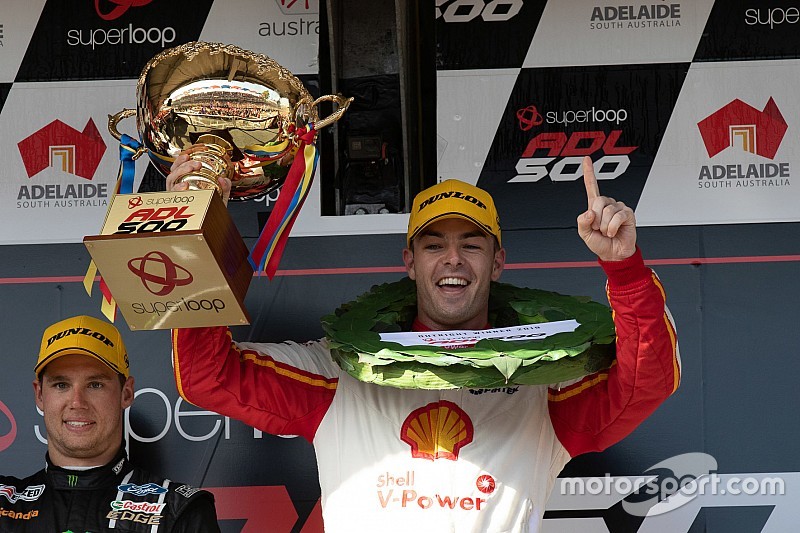 Supercars champion Scott McLaughlin completed a clean sweep for the brand new Ford Mustang in Adelaide with a comfortable second win for the weekend.

Shane van Gisbergen was the best-placed Holden in third.

After a 20-minute delay to the start thanks to late repairs to the Turn 1 tyre bundle, McLaughlin and van Gisbergen kick-started proceedings in sensational style.

The pair rubbed panels as they went side-by-side through the first chicane, the Penske Ford driver narrowly holding on to his lead after a battle that continued up to Turn 6.

There was even more action directly behind the leaders on the opening lap, Cam Waters running David Reynolds wide as they scrapped over third spot, the Erebus Holden dropping back to eighth as a result.

Having staved off van Gisbergen's early challenge, McLaughlin could quickly build a lead. It was over 4s by Lap 10, and 10s by the time van Gisbergen made his first stop on Lap 22.

Van Gisbergen returned in what was effectively third, having been undercut by Waters, who'd stopped on Lap 9.

McLaughlin came in on Lap 24, his initial advantage just 2s over Waters. He quickly put another second on the Tickford Mustang, only for a stranded Jack Le Brocq to cause the first Safety Car of the weekend so far on Lap 27.

The majority of the field hit the lane, and it ended in chaos. The instigator of the drama was Chaz Mostert, who was released into the path of Rick Kelly. The Nissan driver stayed in the throttle and t-boned the Mustang, all but blocking pitlane.

Mostert, who eventually backed up and got going, was swiftly punished for the unsafe release by a drive-through penalty.

When the race restarted on Lap 30 Reynolds dived past Nick Percat for the effective lead, the pair having not pit during the Safety Car period.

McLaughlin was in third, having taken on some extra fuel, followed by Waters and van Gisbergen who both did likewise.

Having spent the middle stint behind Reynolds and Percat, Waters kick-started the final round of stops on Lap 44. McLaughlin followed suit a lap later, emerging just ahead of the Monster Mustang after a slightly slow stop due to a left-rear rattle gun issue.

Van Gisbergen opted to play the long game, holding a 25s lead out front in hopes of another Safety Car.

He eventually got tired of waiting, coming in for his last stop on Lap 56. He popped out in third, 7s off the lead.

Better tyre quality helped him close the gap over the remaining laps, but he was unable to inflict any meaningful damage, despite climbing all over the back of Waters for the final few laps.

In the end it was McLaughlin over Waters to the tune of 2.3s, van Gisbergen just six-tenths back in third.

“I’m really excited. We brought a little pony to the field and took on some German machinery and had a bit of fun,” said McLaughlin.

“The car was unbelievable and the Ford fans, all weekend, have been pumped up about the Mustang, so thanks for their support. I just can’t wait to party tonight.

“We came in hoping for two top fives but to come away with a 300-point weekend just blows me away.”

Behind van Gisbergen there was a gaggle of Holden drivers led by Brad Jones Racing pair Tim Slade and Nick Percat.

Mark Winterbottom capped off his debut weekend as a Holden driver with sixth ahead of Jamie Whincup.

Will Davison was the next-best Mustang in eighth, with Reynolds and Todd Hazelwood rounding 0ut the Top 10.

Both Mostert and Fabian Coulthard dumped serious points, with the former only recovering to 15th.

Coulthard, meanwhile, got dumped into the pack by the pitlane fracas, before copping a drive-through of his own for clattering into Garry Jacobson. He ended up 20th.