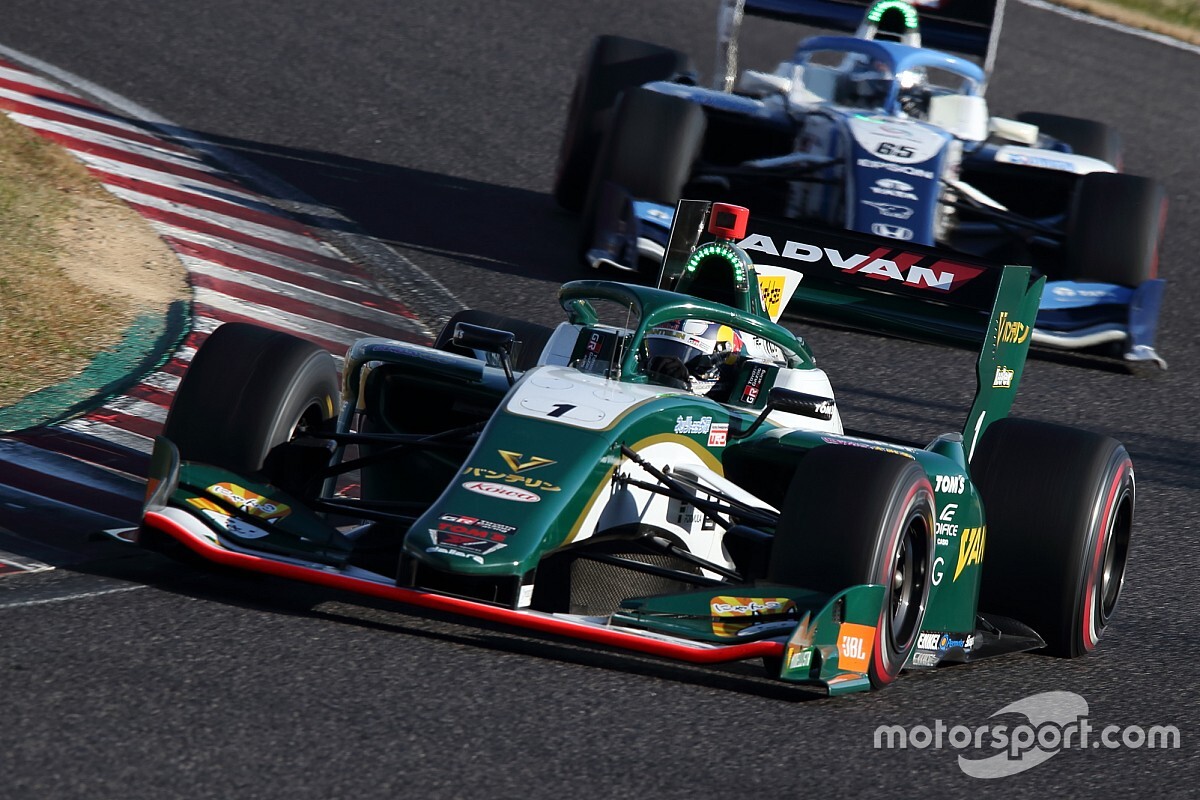 Reigning champion Cassidy, who is leaving the series at the end of the year to move to Formula E, improved on the benchmark set in Saturday's qualifying session by Naoki Yamamoto, posting a lap of 1m34.442s in the Q3 pole shootout.

That put the TOM'S driver 0.182s clear of nearest rival Toshiki Oyu for Nakajima Racing, while Ukyo Sasahara was third for Team Mugen.

Cassidy was almost eliminated in Q1, as he was only a tenth clear of the elimination zone after doing just one run instead of two, but he recovered to top both Q2 and the critical final segment for his first pole since the 2018 Fuji race and his first for TOM'S.

Dandelion Racing man Yamamoto could not match his Saturday pole time, but will line up third on the grid with Sasahara taking a grid penalty for an engine change in the wake of his major Turn 1 crash during Saturday's race.

Nirei Fukuzumi was fifth-fastest in the second Dandelion car but will line up fourth, followed by Kamui Kobayashi (KCMG), Cassidy's TOM'S teammate Kazuki Nakajima and French youngster Charles Milesi, who made it into Q3 for B-Max Racing in only his second attempt.

Saturday podium finisher Yuji Kunimoto (KCMG) and Yuhi Sekiguchi (Impul) were the fastest drivers to drop out in Q2 and will start eighth and ninth.

Ryo Hirakawa, who lost his points lead in Saturday's race after being taken out in a crash with Sasahara at Turn 1, was the biggest name to drop out in the second segment.

The Impul driver will start down in 14th place after setting his best time with around three minutes left on the clock and then pitting, running out of time to go out again.

Behind Hirakawa on the grid will be surprise Q1 dropouts Tadasuke Makino (Nakajima Racing) and Kenta Yamashita (Kondo Racing), although even more unexpected was Tomoki Nojiri's failure to progress from his Q1 group.

Nojiri had qualified second on Saturday but was only ninth-fastest in his group, and will therefore start 17th ahead of  Tatiana Calderon (Drago Corse).

B-Max man Nobuharu Matsushita had qualified 15th but was demoted to the back of the grid forf an engine change following his big crash at 130R during Saturday's race.