Prior to last weekend's Motegi round, it had been four years since Mugen’s Red Bull-liveried #15 car won a Super Formula race. Here’s how unheralded rookie Hiroki Otsu managed to do what his more esteemed predecessors couldn’t.

Ever since Pierre Gasly came within a whisker of winning the Super Formula title in 2017, expectations have been high for the occupants of the Honda-powered #15 machine, but for a whole variety of reasons those expectations have never come close to being met.

Nirei Fukuzumi, Dan Ticktum, Patricio O’Ward, Juri Vips and Ukyo Sasahara have all taken turns in filling that Mugen seat since Gasly’s departure, but between them the best finish they could muster was sixth place, let alone the kind of results expected by Red Bull’s famously tough taskmaster Helmut Marko.

Besides Sasahara, who was a last-minute replacement for the absent Vips last season amid the coronavirus situation, Otsu is the first driver to have been given the keys to the #15 car with no prior affiliation to Red Bull. In fact, there were doubts as to whether Mugen would field a second car at all this year, before Team Goh stepped in to support the team to continue.

Otsu’s win was slightly overshadowed by his Mugen stablemate Tomoki Nojiri winning the title with a round to spare, but somehow it feels fitting, for Otsu arrived in Super Formula with much less fanfare than most rookies owing to his somewhat stop-start career.

But it’s fair to say that after a relatively slow start the 27-year-old has found his footing in the series, and he was able to capitalise on the mixed weather conditions at Motegi on Saturday in brilliant style to bag a first career Super Formula pole, and then convert that into a hard-fought victory. 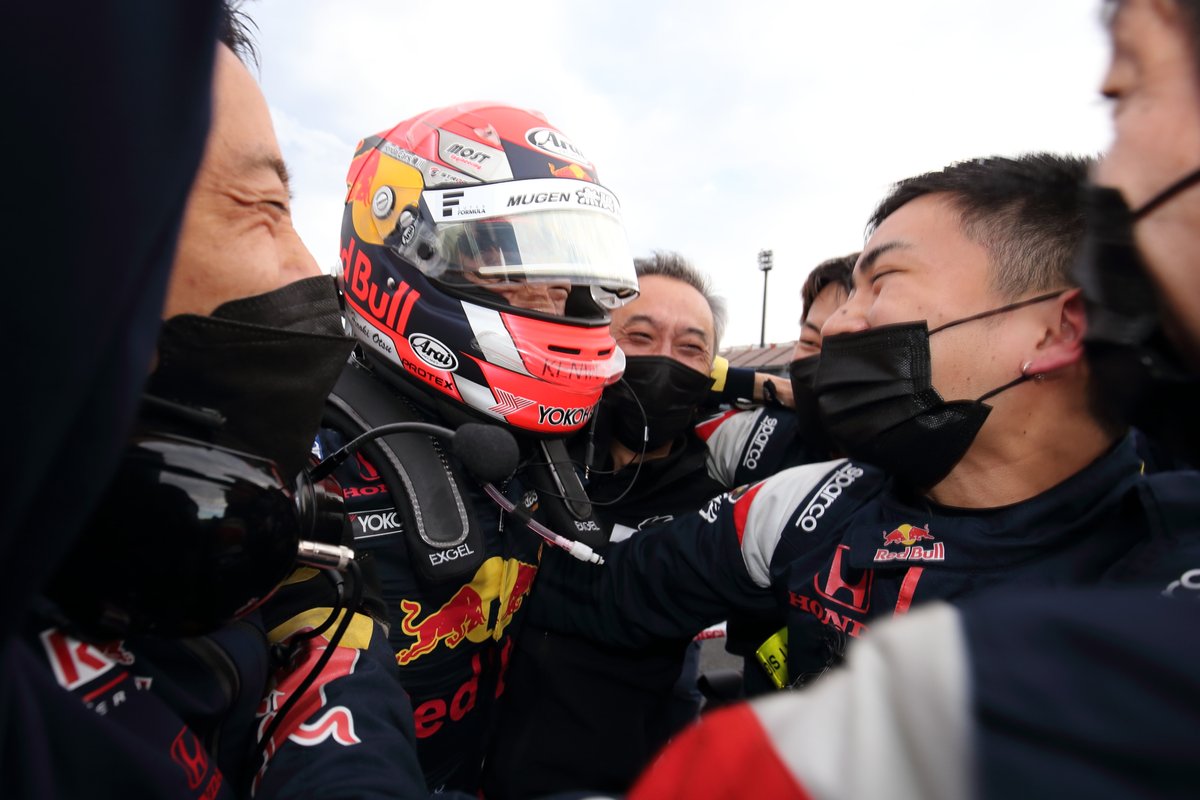 Key to Otsu’s success was the inspired call to use slicks on a drying track in Q3 on Saturday. He was the only one of the eight drivers in the pole shootout to make that call, and his bravery gave him pole position by a massive margin of 4.5 seconds over Naoki Yamamoto.

But Otsu was already confident on the slicks because he had been running on that tyre in Q2 when the rain was getting heavier, just doing enough to scrape through into Q3 with the fourth-fastest time in his segment despite the worsening conditions.

That was thanks to a call by chief engineer Ryan Dingle to keep Otsu out on slicks in Q2 at a time that several other drivers had pitted in to change to wets, and Otsu wanted to do likewise.

“It was because I was able to complete my run in Q2 [on slicks] even when there was a lot of water on the track,” said Otsu of why he was confident to use slicks in Q3. “And when Q3 started, I thought, ‘it’s not raining more than I expected’.

“[In Q2] with that amount of rain, the dry tyres were not really working, and I had the feeling I could do a better laptime with wet tyres, so I wanted to pit in.

"But in the end we decided to stay out. I think Ryan told me that considering the amount of time left in the session. The fact I could stay out on track and claim fourth was really important.”

As well as Japan-domiciled Canadian Dingle, Otsu’s advisor Takuya Izawa – also his teammate in SUPER GT – encouraged him to go with slicks in Q3.

“At first I considered doing an outlap on slicks and then changing to wet tyres if it was impossible,” said Otsu. “In the end, it’s the driver’s decision, but they [Dingle and Izawa] said, ‘in this situation, you should do the opposite to what your opponents do to get pole’.

“We decided to go with slicks, and with that mind, we changed the tyre pressures and the set-up, and I think that helped as well.” 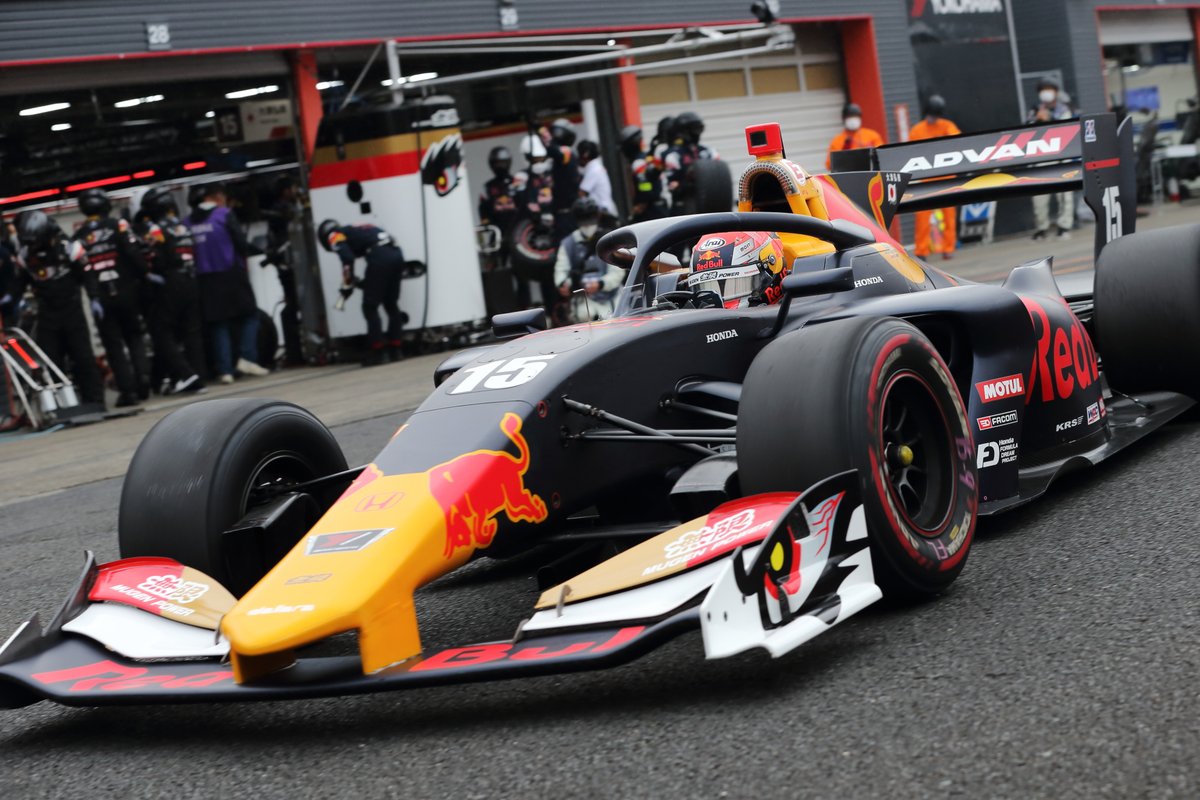 Otsu admitted post-race that his qualifying success was “lucky”, and come the race, there was another major stroke of fortune for the Mugen rookie.

That was the safety car coming out on lap 11, caused by a spin for Sacha Fenestraz, which essentially made it an easy decision to pit for slicks on a wet-but-steadily drying track.

Otsu's nearest pursuer Yamamoto, on the other hand, made what turned out to be the wrong decision to stay out on wets, and ended up having to make his mandatory stop under green flag conditions.

“While I was being chased by Yamamoto, by chance the safety car came out and we were able to pit,” recalled Otsu. “Since I was leading, it was quite risky to judge whether I should pit before the drivers behind me, but immediately the team told me to box.

“Because in qualifying I’d used dry tyres on a wet track, I wasn’t worried about coming in a little early. If we had stayed out on wets for longer, I could tell we would start slipping backwards, so I think the team made a good decision.”

All that remained for Otsu was to hold on from his nearest pursuer Sena Sakaguchi, likewise a rookie aiming for a first win in Super Formula. With the track still not completely dry, there were plenty of chances for Otsu to slip up, but he barely put a wheel wrong on his way to a 1.7-second victory.

“This time I didn’t feel much pressure," said Otsu. "I wasn’t thinking about winning, I just thought about maximising my potential according to my own abilities and the conditions. I think the fact I raced with the same feeling as always helped me stay calm and deal with everything.

“I’m not one to show my emotions much, but up to now there have been a lot of times I’ve struggled and not been able to fight well despite the team’s hard work. This is the first time I’ve won since F3 [in 2017], so that makes it twice as sweet… I didn’t cry, but I was overjoyed.” 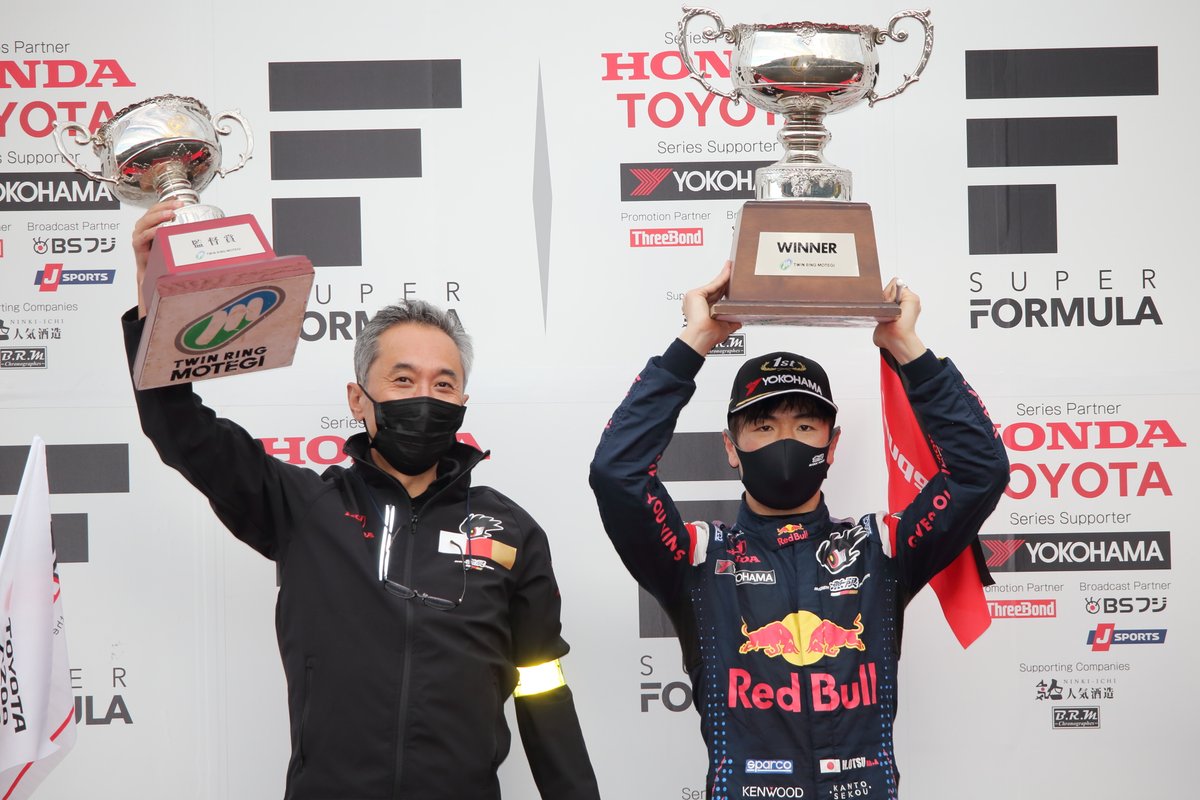 Mugen boss Hirokatsu Tanaka (pictured above alongside Otsu) was also keen to praise Otsu on a banner day for Mugen, which wrapped up its third drivers’ title courtesy of Nojiri’s fifth-place finish.

“In today’s race, honestly I was a little worried about whether Otsu would be able to stay calm and fight, but I think he endured the pressure well, and drove without making any mistakes,” said Tanaka, who only assumed the team director role this season. “I think he won thanks to his real ability.

“Otsu is basically not a flashy guy and his strengths are not obvious, but I think he is good at steadily increasing his speed. I was happy to see him finally achieve this result.

"The final race at Suzuka [on October 31] is one that will provide a starting point for next year, so without losing our focus, I want to compete with a structure in which either Nojiri or Otsu can win."