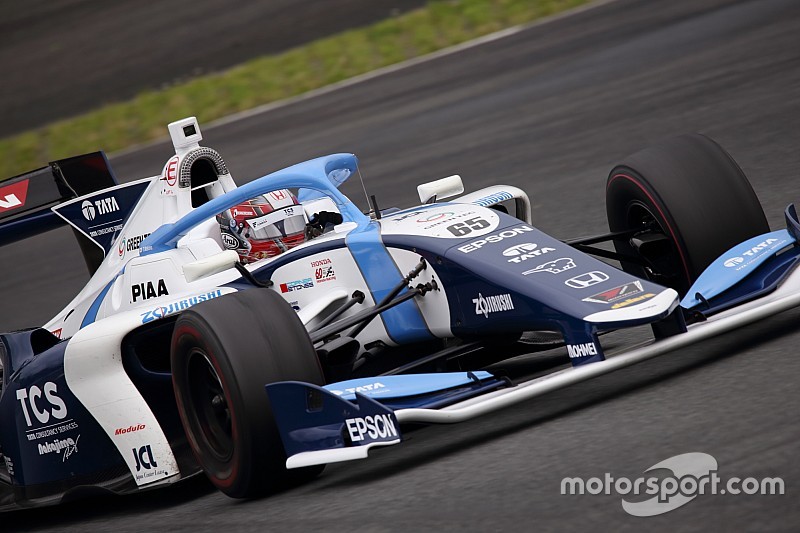 It was TOM’S driver Kazuki Nakajima who monopolised the top spot for much of the one-hour session, leading with an early benchmark of 1m23.893s.

He improved marginally to a 1m23.866s after bolting on a set of soft tyres - and that time remained unbeaten until a flurry of late laps in the final 15 minutes of the session.

Reigning Japanese F3 champion Sho Tsuboi was the first driver to depose Nakajima from the top with a time of 1m23.687s.

But with five minutes to go, Palou managed to go even quicker, lapping the ex-Formula 1 venue in 1m23.287s.

That time would ultimately never be toppled, although B-Max by Motopark driver Newey ended up within three tenths to end up second.

Nakajima made a late improvement of his own to finish third ahead of Kondo Racing’s in-form man Kenta Yamashita and the aforementioned Tsuboi, who slipped to fifth in the final order.

Red Bull junior Lucas Auer, who secured his maiden Super Formula at Sugo last month, was classified sixth, half a second down on pacesetter Palou.

Auer was set to go even quicker after setting a personal best in sector one, before aborting the lap and heading straight into the pits to end his session.

Team LeMans’ Kazuya Oshima, fresh off a Super GT win at Buriram, was next up in seventh, with Ryo Hirakawa eighth for Impul.

Tadasuke Makino finished ninth in the second of the Nakajima Racing cars, while Kondo’s Yuji Kunimoto completed the top 10.

Red Bull junior Patricio O’Ward completed 27 laps on his Super Formula debut, his best effort of 1m25.535s placing him 20th in the timesheets.

Can O'Ward succeed where Ticktum failed?

O'Ward "slowly getting the hang" of Super Formula