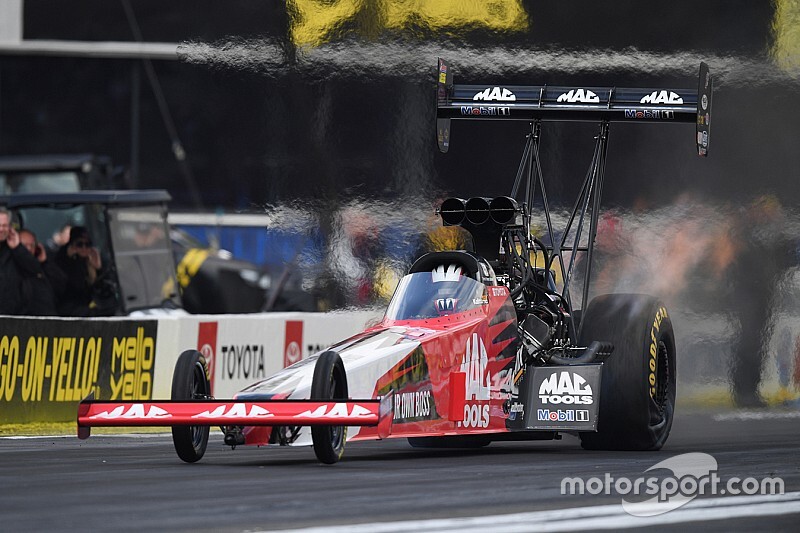 Kalitta went 3.698-seconds at 330.23 mph in his Mac Tools dragster to defeat John Force Racing’s Austin Prock in the final round at Auto Club Raceway at Pomona. Kalitta has won four of the last five races at the track, and it marked his 48th career win, placing him fifth on the all-time Top Fuel list.

“It’s been an interesting day for sure, a lot of close racing,” said Kalitta. “We have people up there trying to tear the tree down on you so you’re a little nervous about all that. It worked out well though.

“I’m just really proud of my guys. They busted their tails today. We tore up a little bit of parts here, but it was all good.

“The 60th is pretty special. Connie was here at the first one. I couldn’t be happier for him and the family and the legacy that’s been created out here. I’m just glad this is one of our better tracks.”

In Funny Car, Beckman picked up a win after going 3.837-seconds at 333.33 in his Infinite Hero Foundation Dodge Charger SRT Hellcat. Beckman defeated Steven Densham, Ron Capps and Alexis DeJoria to advance to the final round, where he took the win over Funny Car legend John Force.

“To beat John Force in the final, it's a pretty cool weekend,” said Beckman. “It’s my home track. I’ve probably spent more time down there on the starting line than anybody else. I feel comfortable here.

“This a perfect storm. I had never won a nitro title at Pomona up until November last year and now I got two in a row. It’s beyond magical. You don’t know if your last win is your last win. I’m going to go out on a limb and say this isn’t our last win.

“The Infinite Hero team has been amazing. We were top two every run in qualifying, except for the first round. Our car was just absolutely amazing. As a driver, you don’t want to limp your way into the winner’s circle. It was awesome for us.”

Coughlin kicked off his “Breaking Barriers 2020” retirement tour with a bang, taking home the Pro Stock event win with a 6.522-second pass at 210.80. Earlier in the weekend, Coughlin announced that he would be stepping down from professional Pro Stock racing at the conclusion of the 2020 season.

He beat out Jason Line for the event win, who also announced that 2020 would be his final professional season. Coughlin defeated Joey Grose, Chris McGaha and Kenny Delco to advance to the final round at the 2020 Winternationals.

Said Coughlin: “Ricky Jones and Richard Freeman, the whole Elite team did a fantastic job over the winter. Today’s race was outstanding. I can’t recall a time in my 20-plus year career in Pro Stock that I was low for each and every one of the sessions and won the race. That’s quite a testament to the team.

“Hopefully it’s something we can hold on to for a little bit. It looks like we have a bit of a performance advantage here at Pomona and we were able to capitalize on it.”