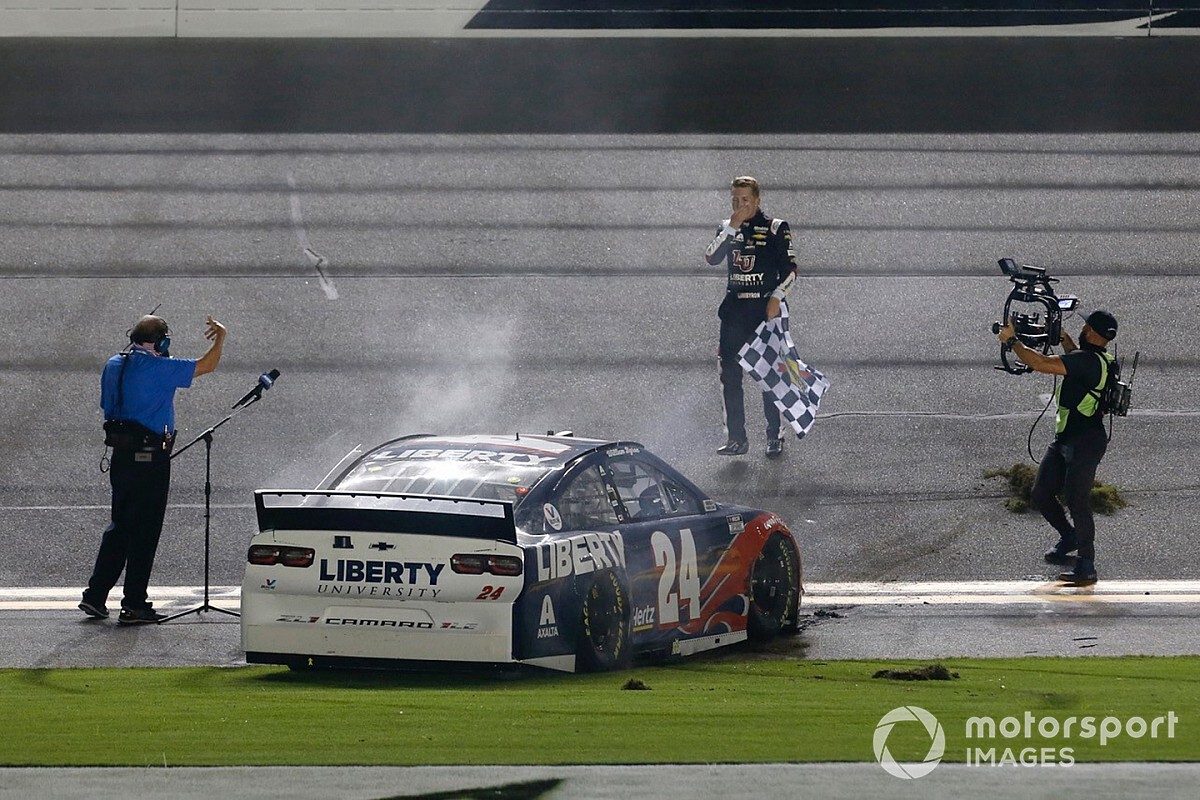 And it served them well throughout the race.

From Knaus’ decision to forego track position to pit for four new tires late in the race, to Byron’s daring three-wide move to split Joey Logano and Bubba Wallace and avoid an ensuing multi-car wreck with one lap remaining in regulation, Byron and his No. 24 Hendrick Motorsports team took full advantage of “one of those do-or-die situations.”

The effort paid off leaving Byron on the front row alongside leader Denny Hamlin on the restart to the final two-lap overtime.

He took advantage, quickly getting past Hamlin and holding off Chase Elliott to capture his first series victory which also locked him into the 2020 playoffs.

“There was a point in that race that I didn’t really think things were going to work out in our favor to make the playoffs, really have an opportunity next week,” Byron, 22, said. “Kind of crossed that fork in the road tonight. We were able to be aggressive and make it happen.

“Really just the final probably 10 laps of the race I was on offense, trying to just win the race and take whatever run I could. Luckily was able to make the moves that I needed to. Got just enough daylight between (Logano) and (Wallace) to kind of split that gap.

“From there, the final restart got a great push from (Clint Bowyer). I was fortunate that things worked out to where I had (Elliott) with me on the last lap, was able to make it work.”

Byron joins NASCAR Hall of Famer Jeff Gordon as the only drivers to win in the iconic No. 24 car. Byron is now the 21st different driver to win his first career Cup Series race at Daytona.

Byron entered the race on the bubble of making the 16-driver playoff field based on points but the unpredictability of superspeedway racing made winning the event the only guarantee to compete for the series title.

“You couldn’t have picked a more pressure-packed race. When you’re at a superspeedway, the running order changes every two laps practically, it’s incredible to put that much pressure on a couple of points,” Byron said.

“You really can’t points race, which I think is probably what they want us to do. They want us to go for wins, try to compete hard. It was a perfect format for that. It really forces your hand to go for the win.”

Byron moved into the Cup Series in 2018 with high expectations and a stout record in the Xfinity and Truck series.

In his only season in Xfinity in 2017, Byron won four races and the series championship as a rookie. In only fulltime season in Trucks in 2016, Byron won a series-best seven races. He also won a K&N Pro Series East (now ARCA East) championship in 2015.

The Cup Series has been a difficult road for Byron and in his first 97 starts he had managed just six top-five finishes.

Asked what he thought he might remember most from Saturday night’s victory years down the road, Byron said, “Just the excitement of crossing the line. It’s been a long time coming for this win in the Cup Series.

“This is awesome, man. It’s going to be great to celebrate with my family. Just extremely blessed and fortunate that it worked out.”