Roundtable: Who will be the next first-time winner? 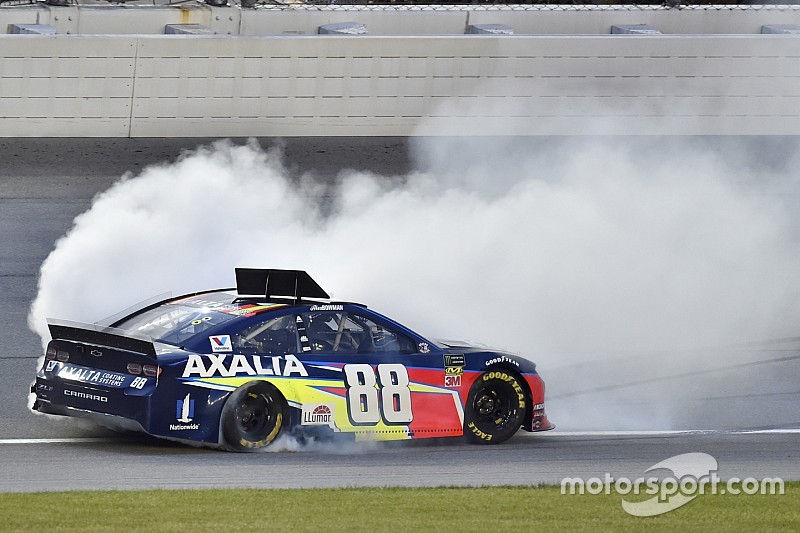 This Saturday night's NASCAR Cup Series race will be the first at Daytona with the new rules package which could shake things up a bit in the race.

This week the NASCAR team examines some key stories from Chicagoland Speedway and looks ahead to series' return to Daytona International Speedway in this week's edition of the NASCAR Roundtable.

Jimmie Johnson scored his first top-five finish since May of 2018 when he finished fourth on Sunday at Chicagoland Speedway. Do you think he and his team have finally turned the corner to have more consistent finishes and maybe even a win in the near future?

Jim Utter: I'm a little skeptical only because I thought the No. 48 was turning the corner earlier this season then seemed to lose a little ground. Given the performance by Hendrick as a whole Sunday, however, combined with Johnson's performance throughout the whole weekend, it does seem as the No. 48 could be back to contending for race wins. There are certainly some good tracks for Johnson coming up that may well provide an opportunity for a win to lock himself in the playoffs.

Nick DeGroot: Let's see how they do when we get back to another intermediate track. The entirety of Hendrick Motorsports was impressive but it was just one race. I won't start saying they've turned things around until they can perform like that consistently.

Tim Southers: As a NASCAR fan I certainly hope so. Jimmie Johnson winning is good for Hendrick Motorsports and NASCAR. I don’t know if one top five is enough to say the team has turned things around, it surely can’t do anything but help everyone’s confidence. Hendrick Motorsports as a whole had a good weekend at Chicagoland Speedway so there could be something happening at HMS. We’ll see for sure over the next couple of races.

Alex Bowman became the first driver this season to score a first-time win in the NASCAR Cup Series. Who do you predict will be the next one to do it?

Jim: Right now, I would lean toward Bowman's teammate, William Byron. He and crew chief Chad Knaus seem to have really found a good working relationship that has translated into strong performances on the track. Byron and the No. 24 have been qualifying well in recent months and now seem to be able to produce good race results as well. The more he runs up front the closer he gets to earning his first career Cup series win.

Nick: Daytona is a great place for a first-time winner. Although the obvious choices would be Byron and Suarez, I'm going with the driver who led the most laps in the Daytona 500 -- Matt DiBenedetto. He was so impressive here in February and I am going to gamble and say he'll win it this weekend, making him the next first-time winner.

Tim: My pick as the next first-time NASCAR Cup Series winner is William Byron. He’s shown plenty of speed at times, especially in qualifying, and I think he’ll figure a complete race out and contend for wins very soon.

The superspeedway rules package will be utilized in a Daytona race for the first time this Saturday night. Do you think we'll see the type of race we saw at Talladega Superspeedway earlier this year or will it be something entirely different?

Jim: It's hard to say. I suspect it will be similar based on the rules but Daytona has always been more of a handling track that Talladega, which could alter how the race plays out. I still think the teams that have traditionally been good at superspeedway races will continue to do so. In other words, it could be another good day for Hendrick Motorsports.

Nick: It'll be similar to what we saw at Talladega with massive drafts, close racing and lots of passing. The superspeedways is the one place I think they nailed it with this package. Talladega was a great show and I expect nothing less from Daytona this Saturday night.

Tim: Although both tracks are classified as Superspeedways, they are totally different as well. Talladega is wider and a tad longer than Daytona and sometimes that means different types of racing too. I think we’ll see the usual drivers that run well at Daytona up front, but it should be interesting to watch how the cars react to the new rules at Daytona and how the race plays out on Saturday.

Christopher Bell became the first Xfinity Series driver to be disqualified in the new rules system in NASCAR. Do you think he rebounds in a big way and wins Daytona like Ross Chastain did in his very next truck race like he did a few weeks ago?

Jim: I don't think Bell and the No. 20 team will have any problem rebounding but his forte has not typically been superspeedway races. There is a possibility of more going wrong this week that right, since he could easily get caught up in a wreck not of his doing, which would give him two consecutive weeks of poor results. In general, though, I don't think the penalty will phase Bell at all.

Nick: He'll definitely be motivated but considering his success so far this season, this disqualification is just a minor setback. It's not like he's in a must-win situation like Ross was.

Tim: I think Christopher Bell is too talented a driver and Joe Gibbs Racing is too experienced to let this be a problem. WHile Bell has not ran particularly well at Daytona, I could see him come back with something to prove this Friday night at run extremely well.