NASCAR announces sweeping changes to the Chase for the Sprint Cup

The 10-race Chase will be split into four rounds of three races each with four drivers being dropped after each round, setting the stage for a winner-take-all finale at the Homestead-Miami Speedway.

By:
Joe Jennings
Listen to this article

Ending the rumored changes to the Chase for the Sprint Cup format, NASCAR made it official today during a nationally televised press conference at the Charlotte Convention Center. Starting with the 2014 season, all-out emphasis will be placed on winning and the Chase Grid will be determined by the drivers with the greatest number of wins after the first 26 races.

The 10-race Chase will be split into four rounds of three races each with four drivers being dropped after each round, setting the stage for a winner-take-all finale at the Homestead-Miami Speedway.

NASCAR chairman and CEO Brian France made the announcement with NASCAR president Mike Helton at his side. In addition to the television crews and reporters, there were a large number of NASCAR officials, industry representatives, team owners and track owners along with others in the crowded room.

“It is our responsibility to make sure we are putting on the best and most exciting racing product on the track,” France said. “We are putting greater emphasis on winning races, which is something our fans overwhelming want. Secondly, we want to make competing and running for a championship much simpler to understand. Thirdly, we want to expand the opportunity for more drivers to compete for a championship and ultimately awarding the championship to the most worthy, battle-tested champion.” 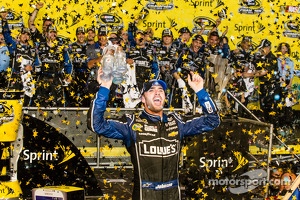 France indicated his staff looked at various scenarios, held dialog sessions with the competitors, reviewed models, considered fan input and analyzed quality data in their quest to formulate a quality end-product. The fast-paced presentation was followed by a question and answer session. Repeatedly, the NASCAR hierarchy underscored the emphasis on winning, a point said to be a priority of fans, teams and television partners.

France also said that casual fans (and drivers) don’t understand point racing, which will be de-emphasized with the new format. Consistency continues to be important but less so as of now.

Helton confirmed that numerous scenarios were considered, and there was no intent to duplicate the formats used by other major league sports.

Round two, known as the Contender Round, will involve races at Kansas, Charlotte and Talladega, and the top-12 will vie for 8 spots in the Eliminator Round. Again, winners in this round will advance to the next round and the rest of the top-8 will be set by points and all drivers who advance will have their points reset to 4,000.

Eight drivers will be in the Eliminator Round and any driver winning a race will advance to the finale and the rest of the top-4 will be set by points. All advancing drivers will have their points reset to 5,000. Races in this round will be at Martinsville, Texas and Phoenix. The 36th and final race of season will be known as the NASCAR Sprint Cup Championship and the first driver to cross the finish line will be crowned champion.

Bonus points will be awarded for all but the championship round.

More specifics and insights will undoubtedly surface prior to the Daytona 500 and throughout the 26 races leading up to the Chase.

Johnson revels in “down and dirty, short-track driving” at Iowa

Kurt Busch will remain sidelined for the final two races of the regular season as he continues his recovery.

NASCAR is back road racing for the penultimate round of the 2022 NASCAR Cup Series regular season.