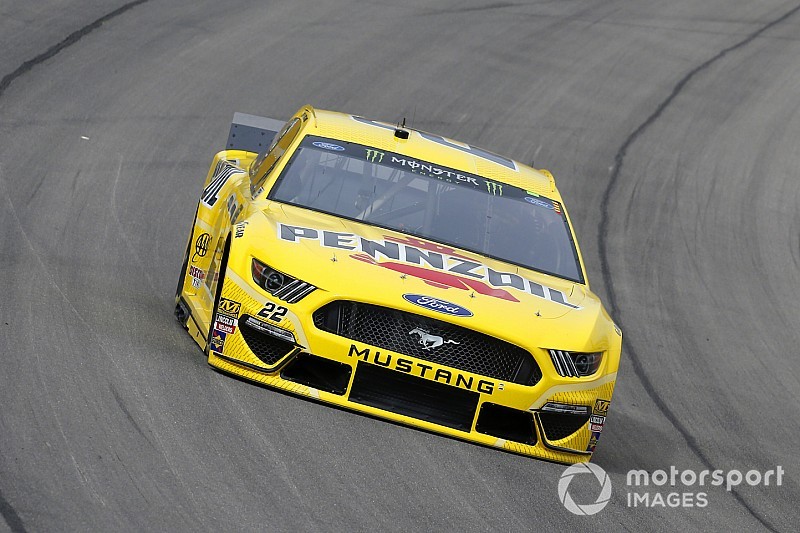 Harvick, who dominated the first stage, ended up second, less than half-a-second behind.

Following the break between Stages 1 and 2, Keselowski took only two tires and was the first off pit road. He was followed by Kyle Busch, Harvick and Logano when the race returned to green on Lap 88.

On Lap 96, Logano – on four fresh tires – finally got around Keselowski to take the lead for the first time. Kyle Busch followed him in second.

With 60 laps to go in the second stage, Logano held a small advantage over Kyle Busch with Harvick right behind both of them. Truex was in fourth.

On Lap 113, Kyle Busch got around Logano for the lead only to see Logano get back around him two turns later.

On Lap 119, Austin Dillon drafted off Kyle Busch and got around Logano to unlap himself and Busch followed him into the lead.

A wave of cars starting a round of green-flag pit stops began on Lap 124, with Logano among the first to pit from those racing up front.

During his stop, Kyle Busch was penalized for speeding on pit road. He was forced to make a drive-thru on pit road under green. He had smoked his tires when he came onto pit road.

After serving the penalty, Busch was 24th in the running order and one lap down.

With 20 to go in the second stage, Byron remained out front and looked like he was attempting to make it to the finish without another stop for fuel. Kurt Busch was second, Logano third and Harvick.

Byron was the last car who had yet to pit and remained out front with 15 laps left.

With 11 laps left, Byron finally made his pit stop, which cycled Logano back into the lead. He was followed by Harvick, Truex and Keselowski.

Logano held about a 1.5-second lead over Harvick with five laps to go with Truex another second behind in third.