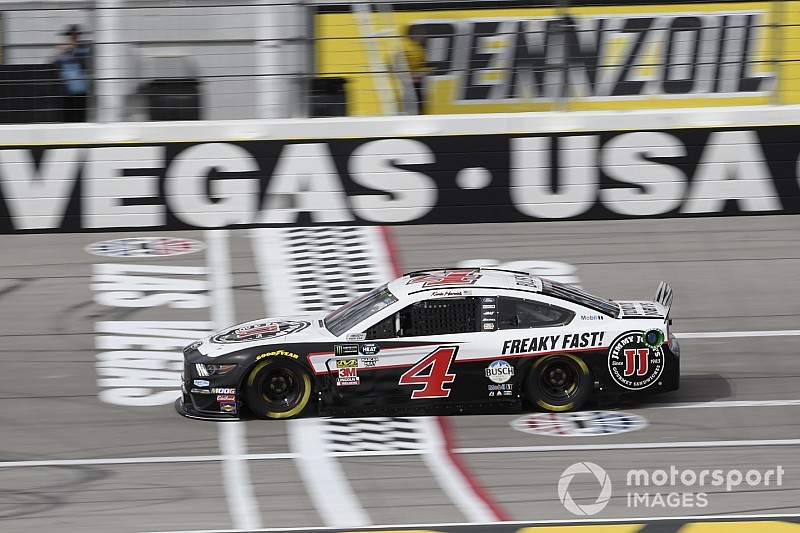 The season has changed but Kevin Harvick’s performance hasn’t as he made quick work of the field on his way to the Stage 1 victory at Las Vegas Motor Speedway.

Except during green-flag pit stops, Harvick led every lap of the 80-lap stage and ended up with a 4.5-second advantage over Kyle Busch at the finish.

On Lap 16, Austin Dillon moved up to the runner-up position with Hamlin moving up to the third position and Stenhouse in fourth.

After 20 laps, Harvick had built up a lead of more than 2 seconds over Austin Dillon.

With 50 laps to go in the first stage, Harvick held a more than 4-second lead over Hamlin, who had moved into second. Stenhouse moved to third and Logano to fourth.

On Lap 40, Stenhouse headed down pit road to begin a round of green-flag pit stops. Bowyer and Larson were not far behind.

During the stops, Kyle Larson and Austin Dillon were penalized for having too many crew members over the wall during their respective stops. Ryan Blaney had to make a second stop for a flat tire.

When the cycle of stops was completed with 20 laps remaining in the stage, Harvick remained out front but about a 4-second advantage over Kyle Busch. Stenhouse was in third and Jones in fourth.

Kyle Busch had cut Harvick’s lead to under 4 seconds with 10 laps remaining in the stage. They were followed by Jones, Hamlin and Logano.

With five laps to go, Logano moved up into third as Hamlin moved up to fourth.

Landon Cassill and Ty Dillon both had to start the race from the rear of the field – Cassill for a gear change and Dillon for an engine change.

Bell had "the most fun" racing Kyle Busch for Xfinity win