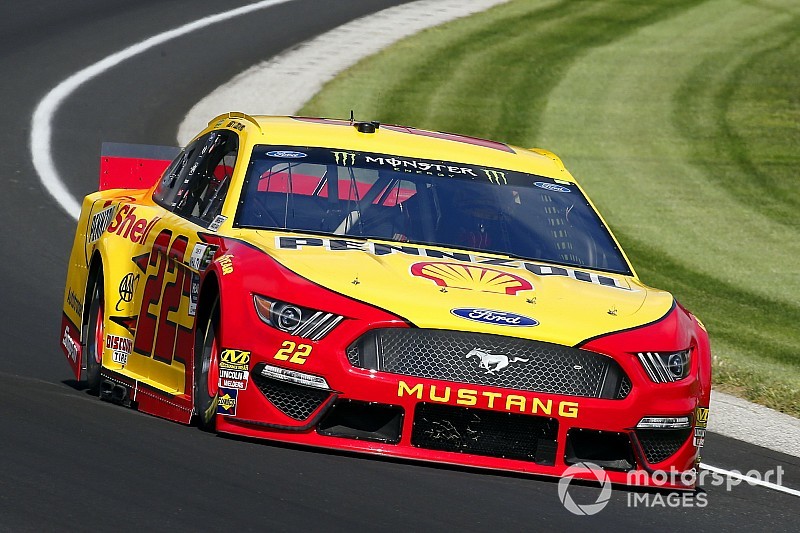 Joey Logano earned the Stage 1 win in the Brickyard 400 under caution following a hard wreck between Brad Keselowski and Erik Jones.

Logano had taken the lead by staying out and led on the restart with four of 50 laps remaining. He was fending off a charge from Kyle Larson when the caution was displayed for Keselowski and Jones’ wreck.

Harvick, who started on the pole, took early command of the race and had built up a 3.8-second lead over Logano.

On Lap 11, playoff contender Daniel Suarez hit the wall coming off Turn 2 to bring out a caution, and immediately went to pit road for repairs.

All of the lead-lap cars elected to pit with Harvick the first off pit road. Several cars were involved in a pile-up during the stops, including Chase Elliott, Bubba Wallace, Ricky Stenhouse Jr. and Martin Truex Jr.

Harvick led on the restart on Lap 16, followed by Keselowski, Blaney, Logano and Paul Menard.

Kurt Busch was forced to pit under green shortly after the restart in order that his team could fix a tire rub.

After 25 laps, Harvick had built a more than 3-second lead over Keselowski as Logano ran in third.

On Lap 31 after having to pit again to address damage suffered during his previous pit stop, Truex fell to last place and three laps down.

With 10 laps remaining in the first stage, Harvick’s lead over Keselowski had ballooned to 6.5 seconds. Larson ran third, Logano fourth and Jones fifth.

Landon Cassill hit the wall hard in Turn 2 on Lap 41 to bring out another caution.

Most of the lead-lap cars elected to pit with Johnson the first off pit road. On the restart on Lap 47, Logano led the way after staying out, followed by Newman (who also stayed out), Johnson, Larson and Harvick.

On Lap 49, Jones and Keselowski wrecked hard off Turn 2, which sent Keselowski shooting down into and on top of a tire barrier on the inside wall. Neither driver was hurt.

The race would not be able to resume before the completion of the stage.

Denny Hamlin had to start the race from the rear of the field after moving to a backup car following a wreck in the final minute of practice on Saturday.

Gallery: The battle to make the NASCAR Cup Series playoffs