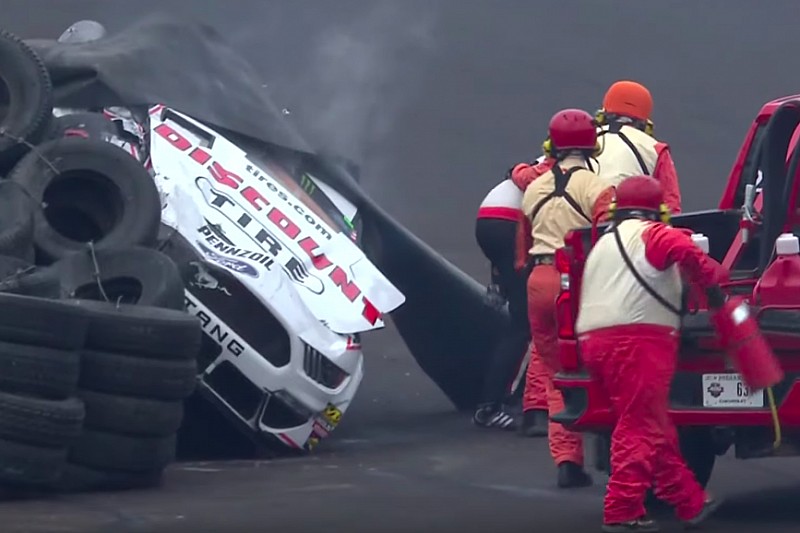 Brad Keselowski escaped a violent crash during the first stage of the Brickyard 400 at Indianapolis Motor Speedway.

On Lap 50 of Sunday's race, Keselowski was battling with Erik Jones for the eighth spot.

Jones appeared to get loose and slid up into the Team Penske driver, sending both cars into the outside wall at the exit of Turn 2. Keselowski's car then slid across the track and ended up impacting a tire barrier, coming to rest on its side. Both drivers walked away.

"I sure would like to see the replay first," Keselowski said after being released from the infield care center. "We had new tires and we were racing some cars that didn’t have new tires and wanted to make the pass there and got real tight to the 48 and lost the nose in the air. I was trying to leave room and probably came down on Erik (Jones) more than I thought I did and he got real loose. No air on my car. I hit the wall there.

He continued, critical of the wall angle and suggesting IMS is in need for another 'safety revolution.'

"There is this spot on the wall with just an atrocious angle. I don't know what that spot is for but it does not need to be there, but we found it. That is how racing goes. We find the things. This track really was part of the safety revolution about 15-20 years ago and I think it is time for another.”

Jones, coming off his first win of the 2019 season in the Southern 500 at Darlington, took responsibility for the incident: “I just got loose and made a mistake. I didn’t think (Keselowski would be so tight on me and I just lost it. It’s my fault. I feel bad for the No. 2 and I feel bad for our team as well. It’s a shame, we had a good Stanley Camry and I just hate seeing it come down like that. I just wasn’t anticipating enough and I drove in too hard for it."