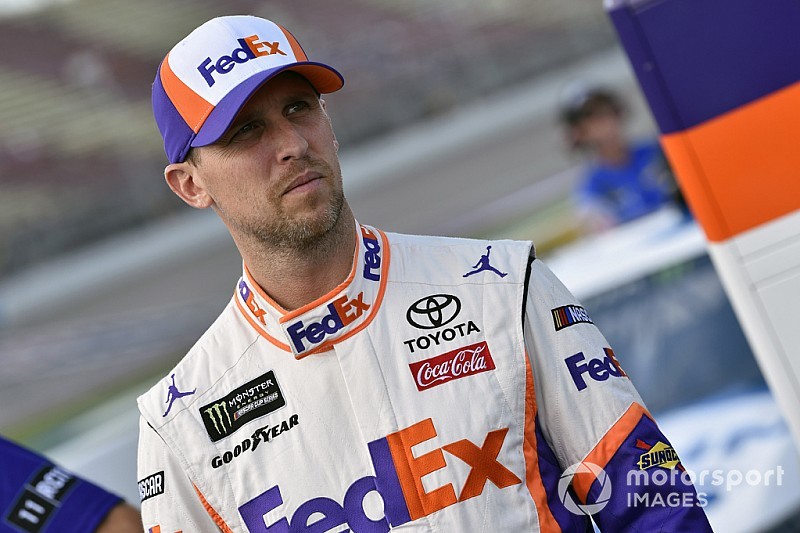 Sunday’s race at Michigan may have turned into a fuel-mileage gamble for many but Denny Hamlin believes the fastest car still won.

Kevin Harvick showed he had a fast No. 4 Ford all weekend but was forced to make a green-flag pit stop in the first stage after suffering a cut tire.

That curtailed his ability to remain at the front of the field while drivers like Brad Keselowski, Martin Truex Jr. and Denny Hamlin were dueling for the lead.

Harvick finally got to show what he had late in the race when he was good to go on fuel to the end, passing then-leader Joey Logano with 17 of 200 laps remaining and holding off Hamlin for the win.

“It seemed like we generally had the best handling car when it was really hot and slick, but as the day went on and the track cooled off, the guys that had built more speed into their car, it kind of handicapped it for them,” Hamlin said after the race.

“So, we were able to hang on to those Fords there at the end, and then (Harvick) was trying to save fuel I'm guessing there, (Keselowski) and (Joey Logano) peeled off (to pit). But we were right there, just a really fast car.”

It appeared what mattered most for Hamlin at the end of the race was speed, not fuel, although a longer run may have helped his cause.

“Nothing I could really do, just didn’t have enough speed.  (Harvick) was about a half-second faster than us in qualifying, and when we were holding it wide open there at the end, just couldn’t overcome it.

“That last run we were down a little bit on speed to keep up with those guys. I was happy that we were able to keep up, but certainly needed a long, long run for our car to come in.”

Hamlin said he and his No. 11 Toyota made a conscious decision before the race to put more emphasis in the handling of the car.

“I mean, it's a balance. The fastest car won the race speed-wise,” he said. “So, who knows what the right thing to do is, but certainly I feel like we had a great (car) today, just came up one more spot short again.”

Hamlin continued his hot summer streak. His runner-up finish was his fifth consecutive top-five (including a victory at Pocono).