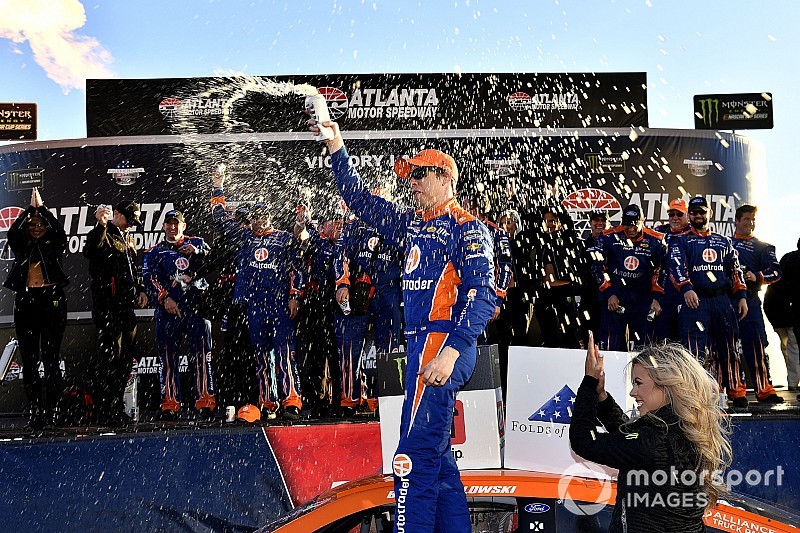 Drivers aren’t the only ones having to adjust and work hard racing with the new rules package being used this season in the NASCAR Cup Series.

Coleman Pressley moved over to spot for Brad Keselowski this season and the duo have adjusted to one another quickly on the track, with Keselowski earning a win and runner-up finish in the past two races.

Pressley says spotters have had to adjust in how they spot for their drivers on intermediate tracks this season.

“You really have to be on your game spotting in these races now,” said Pressley. “The best example I can probably say is spotting with the new rules package is like spotting a mixture of the truck race and the superspeedway races.”

Pressley spotted for A.J. Allmendinger until this season when he moved over to spot for the 2012 NASCAR Cup Series champion and scored his first Cup Series win as a spotter with Keselowski last weekend in Atlanta and was one spot away from doing it again last Sunday.

How he spots has also changed this season with his new driver.

“With the new rules package you have to be really precise with the driver in sharing information,” said Pressley. “I have to feed much more accurate information to Brad during the race. In the past you could have maybe said one car length clear but now you have to be more detailed and share detailed information down to quarter panel or bumper to help your driver.

While the restarts have looked like four-side racing at the superspeedways of Talladega and Daytona, the third-generation racer feels spotters have to think more about how to help their driver keep his momentum or try new things to make a pass.

“Near the end of the second stage on Sunday we had no pressure from behind so Brad asked about a few things and decided to try some things and found something that helped him on the track,” Pressley said.

“We were able to use some of what we learned to help us later in the race and that is what we have to do now sometimes with the new package.”

Pressley added that while deals with other spotters are often made at superspeedway races, communication with his fellow spotters to efficiently work lapped traffic is going to be a high priority at other tracks this season.

“You really have to work with lapped cars so they don’t impede your progress on the track,” he added.

Restarts have also become much more important and deciding which lane to take if you’re the leader has also changed.

“It used to be where you picked the lane that might offer the most momentum,” Pressley said. “Now, though, you might have to look who will be behind you to help give you a push and that might be more important than the lane you pick.

“Spotting and how we as spotters work the race is going to evolve this season much like the driving on the track.”

Jeffrey Earnhardt opens up to Dale Jr.: "I'm cutting my own path"