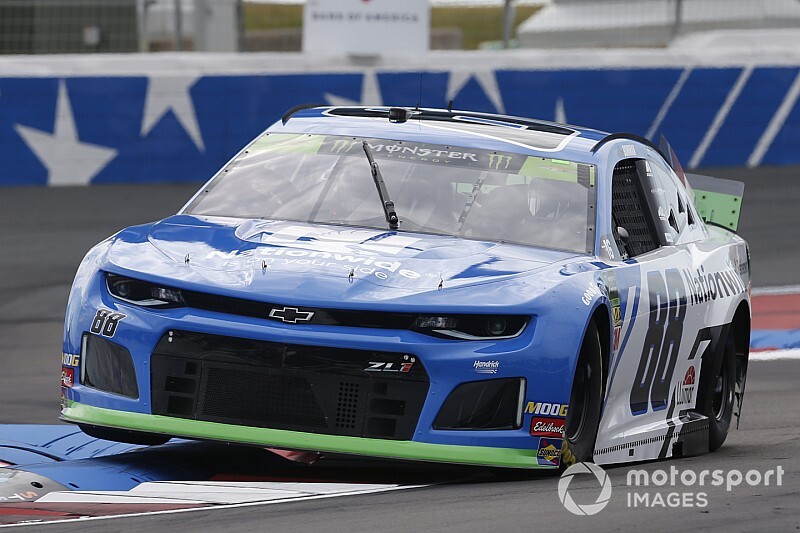 Alex Bowman had quite the eventful race at the Charlotte Motor Speedway Roval, starting with a spin and ending with a bottle of water to the face.

Bowman was set to start Sunday's race from the outside of the front row, but a crash in final practice forced him to the rear of the field.

That one mistake set up a chaotic day for the Hendrick Motorsports driver and it didn't take long for trouble to find him. Bowman spun entering the backstretch chicane on the opening lap, putting him further back.

On Lap 24, he spun again in a multi-car incident entering Turn 1 on a restart. Not 20 laps after that, he got into it with Bubba Wallace and turned the driver of the No. 43 exiting the backstretch chicane.

Bowman's hopes of advancing into the second round of the 2019 playoffs appeared to be in great peril after the tumultuous opening stage. He also failed to score a single stage point as he battled to regain track position.

But with fresh tires he received on a Lap 90 pit stop, Bowman was able to make some serious headway as chaos ensued around him. He drove his way back into contention and restarted sixth with six laps to go. He quickly fought his way through the frontrunners and into the second position.

Despite the impressive charge, he remained one point away from advancing into the Round of 12. It wasn't until Ryan Newman missed the backstretch chicane that he found himself above the cut line, narrowly escaping elimination after an eventful race.

After the race, an exhausted and dehydrated Bowman sat beside his car and received medical attention. It was then Wallace approached him and appeared to throw water into his face before storming off.

After being released from the infield care center, Bowman told NBCSN: "I was really sick Wednesday, Thursday, Friday, Saturday. Felt a little better today but just really behind on being hydrated and just kind of exhausted. Was tired, everything was real tingly, so not a great feeling inside of a race car. Got some fluids and definitely feeling better. We'll be good to go at Dover."

Of the incident with Wallace, their contact on the backstretch was preceded by some hand gestures that Bowman was not too pleased with.

"I don't know if he was mad about the first lap or what but obviously that was just a mistake," he explained. "I got flipped off for every single straightaway on the entire race track for three laps and I got flipped off by him for three or four laps in a row at Richmond, so I'm just over it.

"I gotta stand up for myself at some point, right? Probably wouldn't have gotten wrecked if he had his finger back in the car."

Ryan Newman: “We’re not done, we’re just out at this point"