Zarco pinpoints cause of him trailing Oliveira 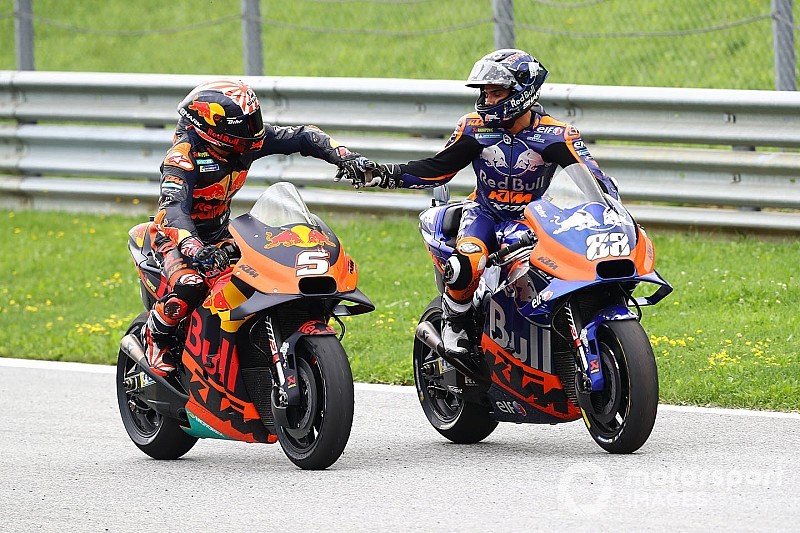 Johann Zarco praised Tech 3 rider Miguel Oliveira for having been more patient in adapting to the KTM MotoGP bike this year, and believes this is the underlying cause behind the Portuguese rider's superior speed.

Zarco joined KTM from Tech 3 Yamaha this year but has not gelled with the RC16, and has opted to leave the team at the end of this year.

Last year's Moto2 runner-up Oliveira was also new to the KTM this year, but had adapted better - most notably outpacing the Frenchman last time out in Austria to score his first-ever top-10 MotoGP finish and pass Zarco in the riders' standings.

Speaking before his impending split with KTM became public, Zarco admitted that Oliveira's approach to the RC16 has proven more beneficial.

"I know what he is doing and he has been able since many races to have constant work and he did it very well," said Zarco.

"He is very fresh in his mind to adapt to this bike and that is why he is doing better than me in the last few races.

"Also speaking with his chief mechanic Guy [Coulon], they are really trying to keep a constant bike to adapt to it and take the time to adapt.

"That is what I didn't do because we are really pushing and trying to change things to open some new doors. Almost it is not the same work. At the moment his work is taking advantage on me."

KTM technical director Sebastian Risse also praised Oliveira and his ability to learn from the strengths of other riders.

"Miguel started kind of as a blank page in MotoGP so he was very open-minded," Risse said.

"[He] just sucks the best from all the riders' riding styles up and tries to develop himself. This is a good confirmation and input."

Out of the first 11 races of the season, Oliveira finished in the points on seven occasions.

While he reckons that repeating his top-10 result from the Red Bull Ring could be "realistic" in the upcoming races as well, he was conscious of the impact prior testing had on his Austrian Grand Prix pace.

"Coming here into this project, I didn't really know what to expect so the target was to finish in the points every race, we managed to do that most of the races in the first half," Oliveira said.

"Now in the second half that is still the target unless we see that our bike capable of doing more.

"This race, I thought it would be possible to fight for the top 10, which we did. Next races we just need to wait and see what will come up.

"Also Brno and this track [Red Bull Ring] were quite different from the usual because we had the test team testing here before.

"That gave us a huge help in understanding which way to go on the set-up."

Promoted: When Rossi quizzed a NASA man travelling at 17,500mph