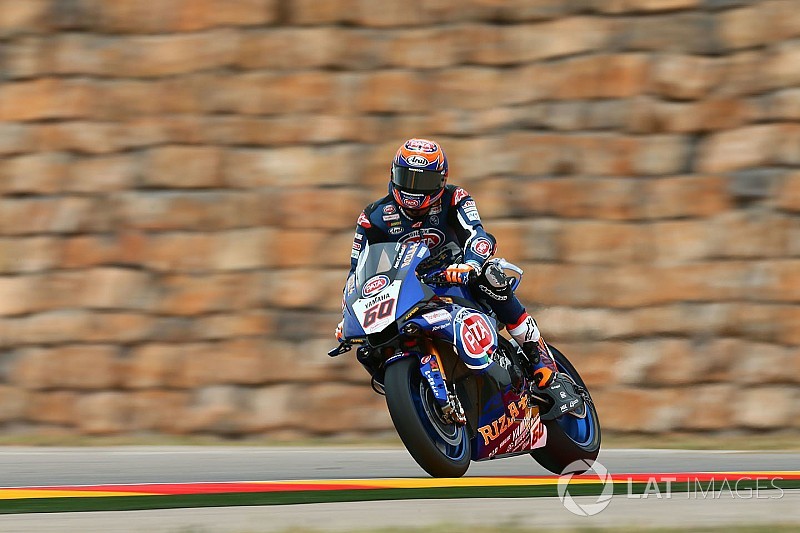 Yamaha has announced that World Superbike rider Michael van der Mark will replace Valentino Rossi for the next MotoGP round at Aragon.

Rossi broke his right leg in a motocross training incident in the lead-up to last weekend's Misano race, and was forced to miss his home event as a result.

While his recovery time was estimated as a month or more, the Italian had previously not ruled out attempting to ride at Aragon – where MotoGP track action will begin just 22 days after his accident.

However, team boss Lin Jarvis has now confirmed Rossi will not be fit enough in time for the event.

And with Yamaha obliged to field two factory bikes at Aragon, it has settled on 24-year-old Dutch rider van der Mark as Rossi's replacement.

"It being virtually impossible for Valentino to be fit to race in Aragon, Yamaha decided to search for a capable replacement from within its own pool of contracted riders," Jarvis said.

"We decided that Michael van der Mark should have the opportunity this time around.

"It is never easy to step in to replace another rider and even more difficult to replace Valentino Rossi, but we believe that Michael has all the credentials and experience to do a good job.

"We will give him our very best support and wish him every success for this exciting opportunity."

Van der Mark joined the Yamaha World Superbike outfit for in 2017, having previously competed for Honda, with which he won the 2014 Supersport title and scored nine Superbike podiums.

Lowes and van der Mark helped Yamaha to a win in the Suzuka 8 Hours this year, while the latter had also recorded two previous triumphs with Honda in 2013 and 2014.

"I‘ve never ridden a MotoGP bike before, so this will be a completely new experience for me," van der Mark said.

"I‘m very curious to see what it feels like to ride on such a machine. I realise that it won‘t be easy going straight into an official practice session without any prior testing.

"Nevertheless, I‘m very grateful to Yamaha for the opportunity. I‘m sure it will be a great learning experience."

He is also now 26 points behind teammate Maverick Vinales, who qualified on pole at Misano and finished the race in fourth.