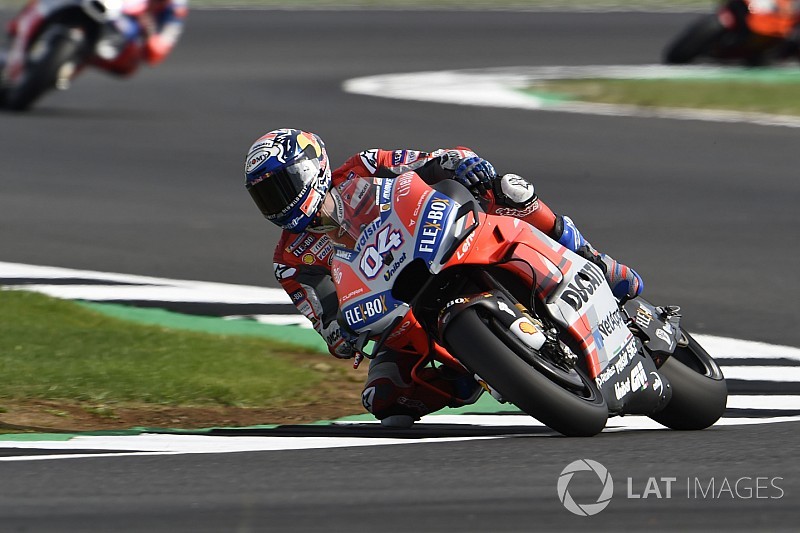 Although spots of rain fell in the closing stages of the preceding Moto3 session, the drizzle had abated by the time the MotoGP field hit the Silverstone track for their second 45-minute session of the day.

Marc Marquez led for most of the opening half of the session, exchanging the early advantage with FP1 pacesetter Maverick Vinales, before the reigning champion's early 2m02.228s was equalled by Dovizioso.

Valentino Rossi then grabbed the top spot with 11 minutes to go with a 2m02.152s, that time standing as the quickest until the final runs began.

It was with four minutes left on the clock that Dovizioso's session-topping 2m01.385s effort was posted, with Crutchlow immediately slotting behind just 0.005s on the LCR Honda.

Yamaha man Vinales went third quickest, and made another marginal improvement on his next lap despite suffering a huge moment exiting Woodcote, ending up 0.061s behind in third.

Marquez could no more than fourth on the works Honda, 0.144s slower than 2017 title rival Dovizioso, while a last-ditch effort from the second works Ducati of Jorge Lorenzo moved him up to fifth.

Jack Miller (Pramac Ducati) was next up, having run as high as third earlier int he session, followed by Johann Zarco (Tech 3 Yamaha) and Rossi, who didn't improve in the closing stages and slumped to eighth as a result.

Tito Rabat (Avintia Ducati) would also likely have made the top 10 until he suffered a huge high-speed off at Farm corner on his last run, consigning him to 13th behind Takaaki Nakagami (LCR) and Danilo Petrucci (Pramac).

Dani Pedrosa was a lowly 15th on the second works Honda, one place ahead of lead Aprilia man Aleix Espargaro, while Bradley Smith again headed up KTM's efforts in 17th place.

Smith's temporary new teammate Loris Baz improved to 23rd in FP2 with a best time 3.3s off the pace.