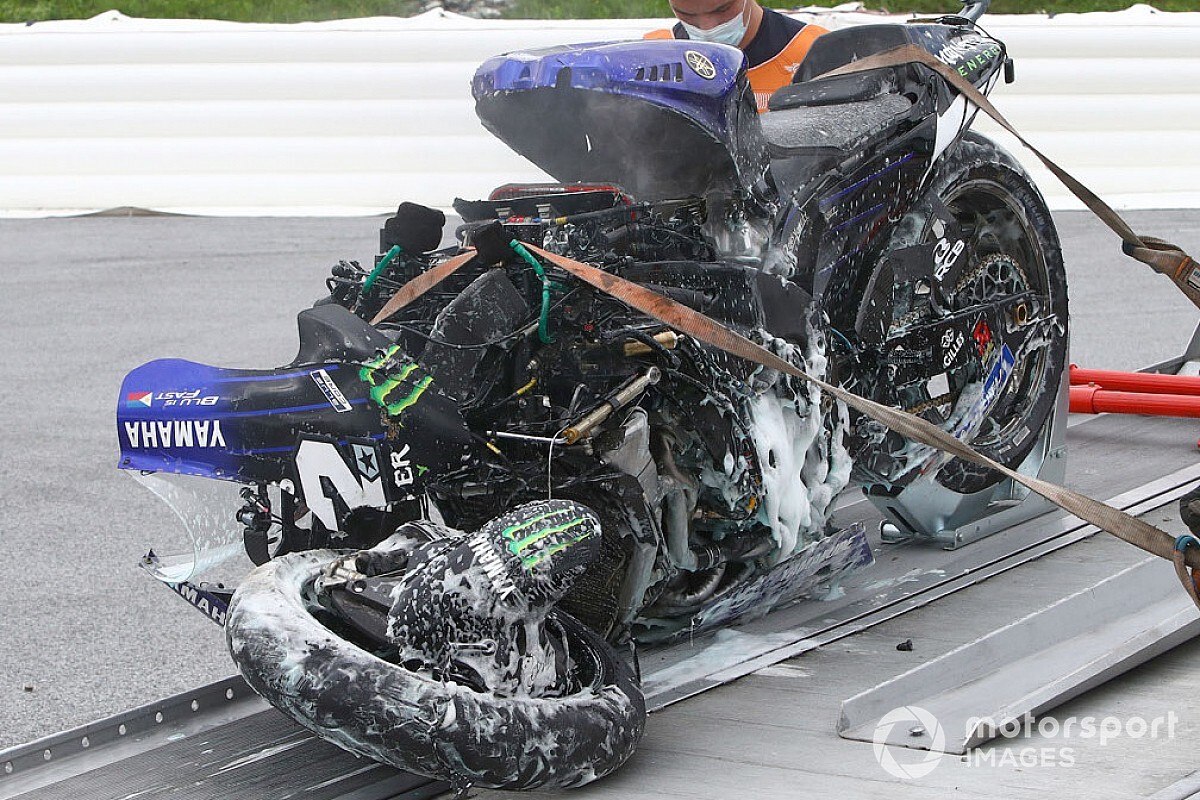 Alex Rins says he ‘doesn’t understand’ why Maverick Vinales didn’t pull out of the MotoGP Styrian Grand Prix when he knew he had brake issues before his dramatic failure.

Vinales brought out the red flag in Sunday’s Red Bull Ring race when he was forced to jump from his Yamaha at 130mph when its brakes failed, with the bike spearing into the air fence and bursting into flames.

The Yamaha rider was caught on camera raising his hand to signal he had an issue with his bike, and he later explained the problem with his brakes was intermittent before they “exploded”.

Rins believes Vinales’ issue may be down to him not using the new Brembo pads and callipers brought for the second Red Bull Ring race following numerous overheating issues with brakes in the Austrian GP.

But the Suzuki rider says Vinales carrying on while struggling with his brakes will likely be discussed in the next Safety Commission meeting.

“The problem Maverick has had, if I’m not mistake, is that in the last race all the riders got very hot brake pads and callipers,” Rins said after finishing sixth in the Styrian GP.

“Brembo brought bigger ones for this race. The only ones who have not fitted these new brake pads have been [Joan] Mir and Maverick, who used the conventional ones that are smaller.

“But if Maverick had already known for a few laps that he had run out of brakes and that is why he was raising his hand, it is normal that he would have entered the pits earlier. I don’t understand why he had to continue in the race.

“We are surely going to discuss it at the next meeting of the Safety Commission.”

Vinales wasn’t convinced the nature of the track was the main cause of the issue, with Valentino Rossi noting that the lack of power from the Yamaha is forcing them to work the brakes harder to recoup some time.

“This track is very severe on the brakes, and everybody suffers,” Rossi explained.

“If you see, everybody has big air ducts on the brakes, also the other manufacturers.

“But looks like the Yamaha suffers more also because we try to gain in braking what we lose in the straights, because our bike is slow but is good in braking.

“So, we try to brake very hard and we stress a lot the brakes. This is the reason why Yamaha suffers more this problem.”

Quartararo no longer "as confident" about MotoGP title shot