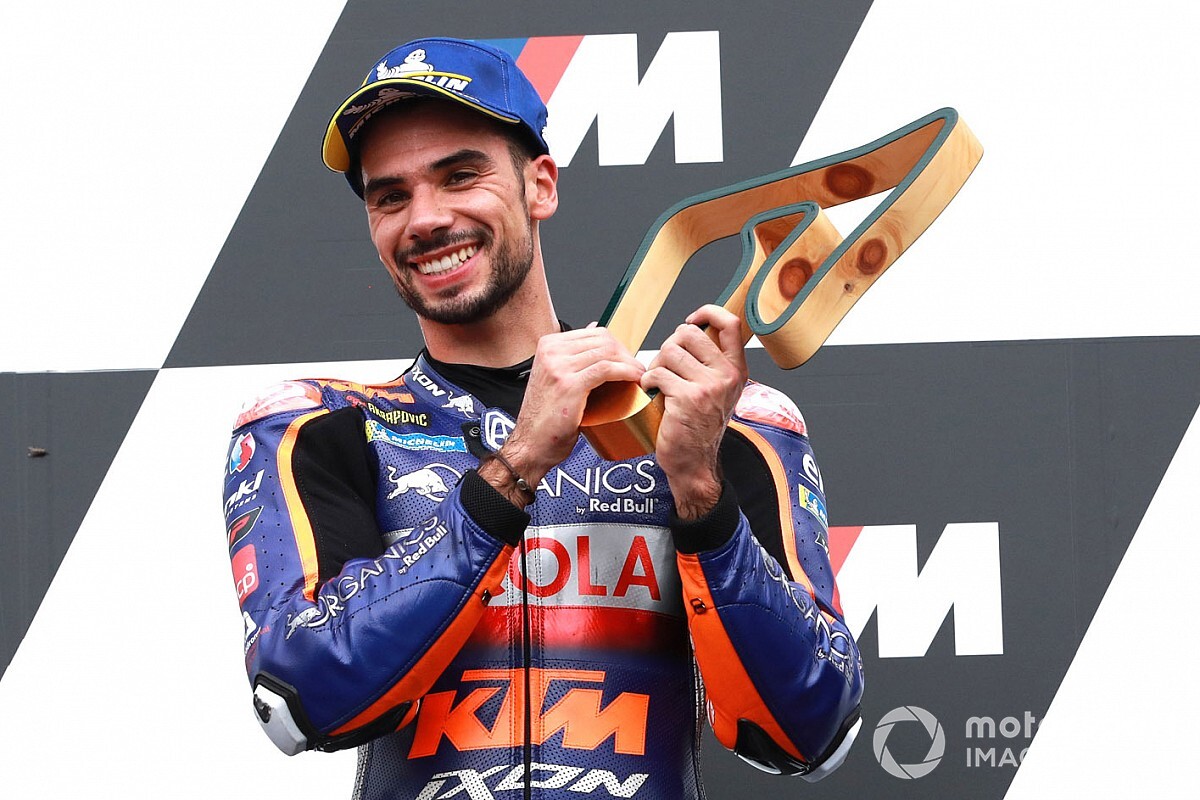 Suzuki’s Joan Mir grabbed the holeshot for the first start, though had to relinquish his lead to Pramac’s Jack Miller for running off at Turn 1 and gaining an advantage.

Mir was then demoted by Takaaki Nakagami on lap four, though the Suzuki soon rallied and by the end of the tour was once again in the lead.

He was able to open up a lead of over two seconds by the end of lap 16 before the red flag brought the race to a halt after Maverick Vinales suffered a scary crash at Turn 1.

Having seemingly been battling brake issues all race, Vinales was forced to jump off his Yamaha at 130mph when it wouldn’t slow, with the bike bursting into flames as it hit the air fence.

Restarted over 12 laps, Mir took the lead again from Miller off the line, though the Ducati moved ahead into Turn 4.

The Pramac rider fitted fresh softs to the front and rear of his bike, while Mir had to suffer with a medium front that had already done 18 laps.

Mir could do nothing to fend of the riders behind coming through, with Espargaro on the KTM and Oliveira moving through to chase down Miller by lap six.

Espargaro, who was struggling to run the pace of the leaders before the red flag, blasted past Miller at the final corner on lap seven having made a failed attempt at Turn 1 the lap before.

The factory KTM rider ran a defensive line into Turn 3 on the final tour, which allowed Miller to get the run on him down into Turn 4.

Espargaro tried to respond on the inside of Turn 5, but the Ducati rider held the position, with Oliveira in third poised to take profit of any drama ahead.

At the penultimate corner, Espargaro launched a raid on Miller, but ran slightly wide and allowed the Pramac rider to draw alongside into the final turn.

Miller muscled through and parked his bike on the exit, forcing Espargaro wide.

But this allowed Oliveira to come through to score his maiden MotoGP victory in the 900th premier class race and the first in the premier class for Tech 3.

Miller held Espargaro at bay for second, with Mir fourth at the chequered flag ahead of Andrea Dovizioso – the Ducati rider dropping out of podium contention after running wide on the last lap.

Alex Rins was sixth on the Suzuki, while Nakagami’s podium hopes faded in the second race and he was seventh in the end, with Brad Binder (KTM), Valentino Rossi on the Yamaha and Tech 3’s Iker Lecuona completing the top 10.

Danilo Petrucci grabbed 11th on the works team Ducati head of Aprilia’s Aleix Espargaro, while a struggling Fabio Quartararo on the Petronas Yamaha maintains a slender three-point lead over Dovizioso after finishing 13th.

Johann Zarco came from the pitlane in the first race to score two points with 14th on the Avintia Ducati, with Franco Morbidelli completing the top 15 on the SRT Yamaha.