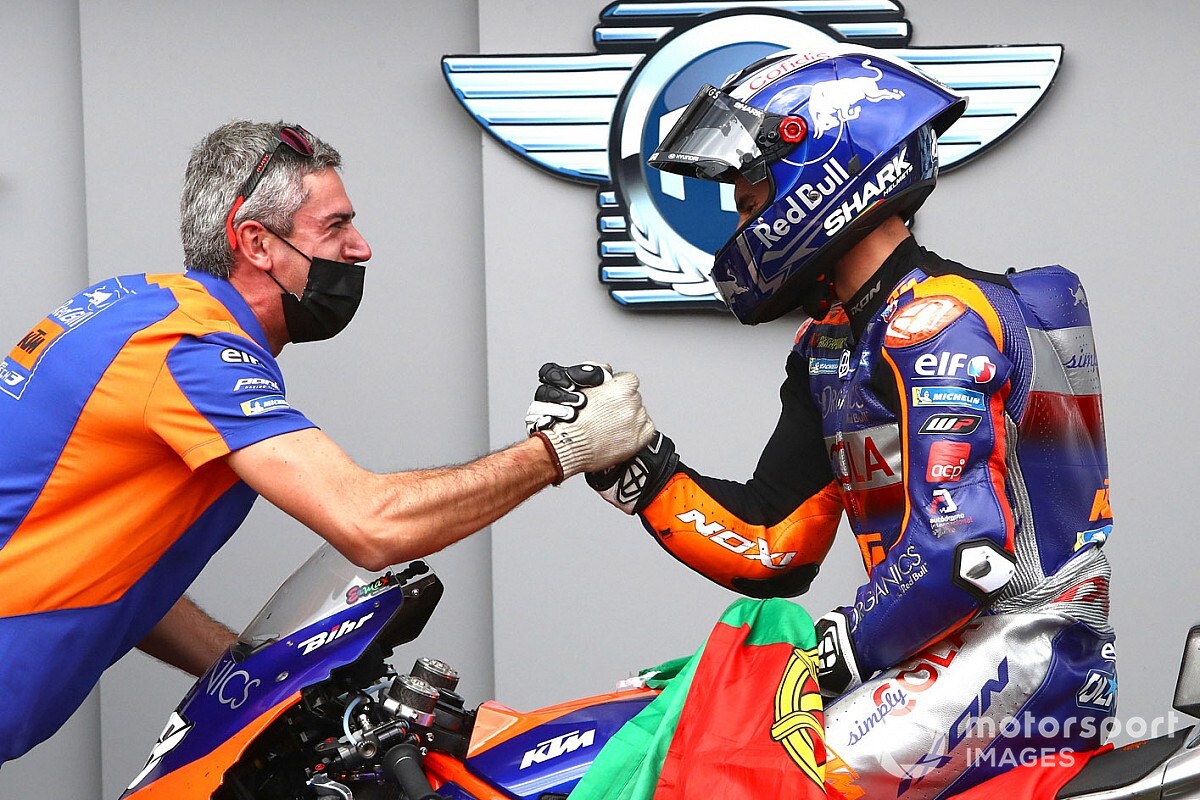 The Portuguese rider became MotoGP’s latest winner in the 900th premier class race after stealing victory from Pol Espargaro and Jack Miller when both ran wide at the last corner of a dramatic Styrian GP.

Oliveira’s best result of his rookie season last year came at Red Bull Ring when he was eighth, which he matched at the Spanish GP last month and bettered with a sixth in the Czech GP.

The Tech 3 rider had shown podium potential at the Andalusian GP when he qualified fifth, but was taken out on lap one by fellow KTM rider Brad Binder, and was on course for his first rostrum last week in Austria when he collided with Espargaro.

“Just screaming and pure joy to have done it finally,” Oliveira replied when asked what was going through his head when he took the chequered flag.

“I saw this coming already quite a few races ago. I felt we had the potential to do it, so finally to be able to do it is a huge boost to be able to continue like this.”

Portugal’s first premier class race winner was cut adrift of the podium battle before the race was red-flagged for Maverick Vinales’ crash, but the halt to proceedings allowed him to switch from the medium to the hard front tyre.

Feeling “immediately better” on the harder rubber despite the cooler temperatures of Sunday’s race, Oliveira knew there was going to be a “tangle” late on when following Espargaro and Miller.

“I’m glad we got a second chance because I was able to change the front tyre,” Oliveira explained.

“I went on the medium front, I didn’t feel like this was the right choice, when we stopped I changed the front to the hard and I felt immediately better. This allowed me to be out there in front and fight for the podium.

“The last couple of corners were just taking advantage of the fight in front of me. I knew that here in Spielberg, the last couple of turns, if a rider is very close he is going to try and go for it.

“Knowing Jack and knowing Pol, I knew they were going to tangle a little bit.

“So, I said ‘okay, I will stay here and work on my exit a little bit’, and to cross the line, [I was] very emotional, very happy.”

Oliveira’s victory marked the first for Tech 3 in MotoGP, which has fielded the likes of Andrea Dovizioso, Cal Crutchlow, Johann Zarco and Espargaro over the years.

When asked what this meant to him, Oliveira replied: “It’s great. If you check the names of the riders who rode there, it’s quite special.