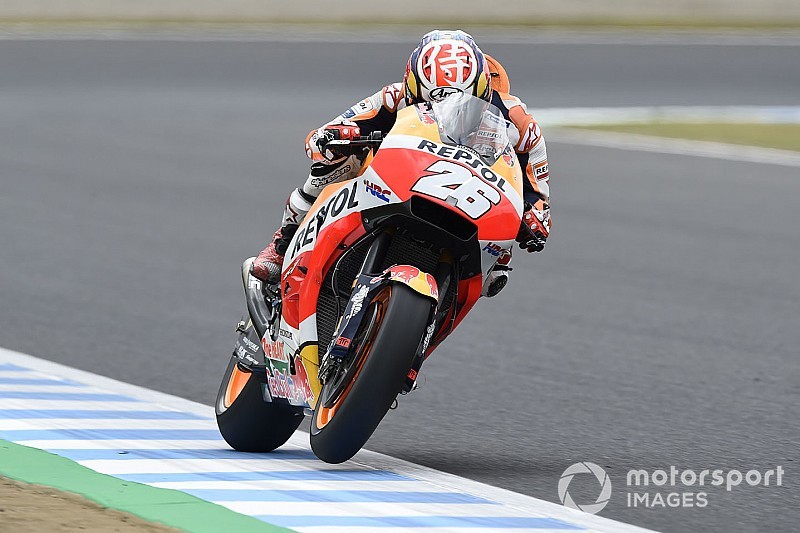 Rain following the conclusion of a dry Friday morning session at Motegi meant just a handful of riders ventured out of the pits in the opening stages, and with 15 minutes left to run less than half the field had set laptimes.

Tech 3 Yamaha's Johann Zarco topped the timesheets at that stage with a 1m54.477s, and the Frenchman had improved to a 1m53.728s when Jack Miller (Pramac Ducati) became the first rider to leave the pits on slicks.

After setting a first flying lap three seconds off the pace, the Australian then leapt to the head of the order on a 1m52.863s, and began to carve chunks out of his own benchmark over the following laps.

The Australian had worked his way down to a 1m49.022s when he was ousted from the top of the times by Pramac teammate Danilo Petrucci at the very end of the session.

Miller ended up fourth ahead of Zarco, who ended the session was the top Yamaha rider after switching to slicks.

Both the factory Yamaha riders Valentino Rossi and Maverick Vinales opted to stay on wets even after it became clear slicks were the tyre of choice, and ended up 14th and 15th respectively of the 18 riders who set times.

The top two in the points, Marc Marquez (Honda) and Andrea Dovizioso (Ducati), were among seven riders who didn't set a laptime all session, along with LCR Honda's Cal Crutchlow.

Dovizioso's FP1 benchmark of 1m45.358s remains the fastest of the weekend so far.

Lorenzo fears he won't recover in time for Phillip Island