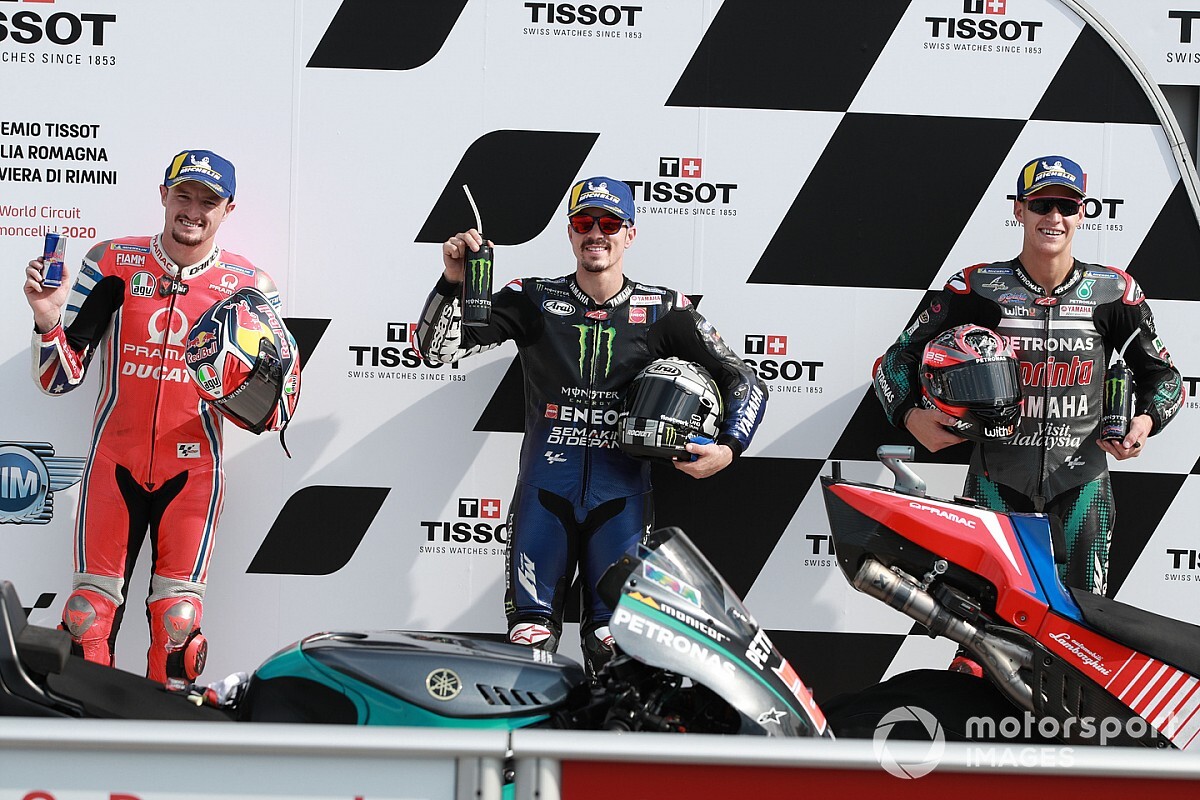 Bagnaia smashed the lap record Vinales set in qualifying for the San Marino race during FP3 despite a crash, and came into qualifying as the favourite after topping FP4.

Yamaha’s Vinales set the benchmark at the start of Q2 with a 1m31.647s, though FP3 pacesetter Bagnaia smashed this with a new provisional pole record of 1m31.313s on his Pramac Ducati.

Fabio Quartararo had jumped up to second on his Petronas Yamaha, and was on course to depose Bagnaia when he had a wobble on under braking for the final corner.

Vinales at the start of his second run jumped up ahead of Quartararo with a 1m31.386s, before besting Bagnaia’s time with a 1m31.268s on his follow-up tour.

Bagnaia lit up the timing screens on his final effort right at the end of Q2 and produced the first sub-1m31s lap of Misano with a 1m30.973s.

However, this was scrubbed as he ran off track exiting the final corner and was dumped back to fifth.

Vinales fired in a 1m31.077ss at the end, which was good enough for second, but promoted him to pole when Bagnaia’s lap was cancelled.

Pramac’s Jack Miller came through Q1 and leaped from 12th to second on his last lap with a 1m31.153s, while Quartararo completed the top three just as he did one week ago.

Pol Espargaro leaped up to fourth on his KTM at the death, with Bagnaia and the sister factory KTM of Brad Binder completing row two.

Andrea Dovizioso sneaked into Q2, but could only manage 10th on his Ducati, with Suzuki’s Joan Mir a disappointing 11th ahead of Takaaki Nakagami – the LCR rider destroying his second Honda in a crash at Turn 15 having done so in FP4.

A late improvement for Dovizioso in Q1 broke Tech 3 and Iker Lecuona’s heart, as it dropped the rookie out of the Q2 places right at the end of the session.

Lecuona had topped the session with a 1m31.715s after the first runs, but will start an equal career-best 13th for Sunday’s races ahead of Avintia’s Johann Zarco, who couldn’t recover from a late crash at the Carro hairpin.

Miguel Oliveira will start 15th on the sister Tech 3 KTM, with Aleix Espargaro 16th on the Aprilia after crashing late on in Q1 while on a lap threatening to lift him back into the Q2 places.

Suzuki’s Alex Rins was a mystifying 18th having got nowhere near the Q2 times on a 1m32.275s behind Honda’s Alex Marquez, with only Aprilia’s Bradley Smith and Avintia’s Tito Rabat slower than Rins.

Dovizioso: ‘Unemployed’ message on leathers is a bet I lost